ASTANA – Heads of the Supreme Courts of South Korea and Kazakhstan discussed reforms, cooperation and exchanging experience in a meeting June 24 in Astana. 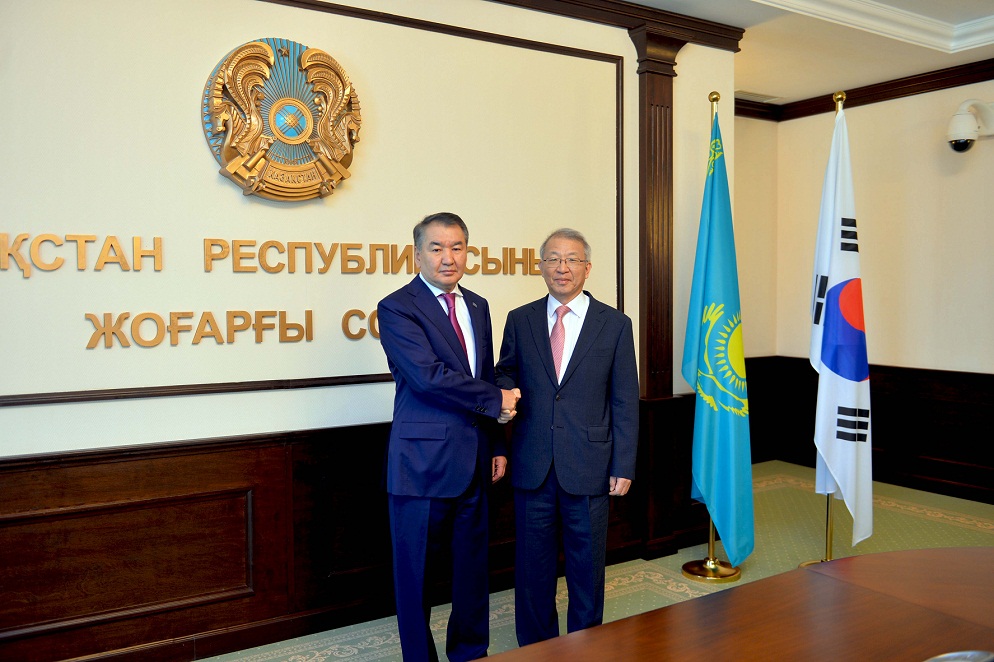 Chief Justice of South Korea Yang Sung-tae and Chairman of Kazakhstan’s Supreme Court Kairat Mami presented information on the development of the judicial systems in their countries.

Mami talked about current reforms that are part of the Plan of the Nation’s 100 Concrete Steps programme, including the transformation to a three-level system of justice, increasing requirements for judge candidates, extending the powers of investigating judges and reducing the participation of prosecutors in civil proceedings, according to a press release on the meeting. He added that a specialised board on investment issues, an academy of justice and an international council had been created within the Kazakh Supreme Court.

Yang Sung-tae talked about the judicial system in his country, particularly about the application of information technologies in legal proceedings.

“Today, we found out about the reforms in the judicial system in Kazakhstan. In my opinion, the directions for the improvement and modernisation are chosen correctly,” he said in an interview after the event.

Attention was given to using electronic technologies in the justice system, a practice Kazakhstan is still working on.

“As you know, South Korea is one of the leaders in the IT industry. We were thinking about the need to informatise the judicial system in the 1980s. In the 1990s, we created it, and today 60 percent of legal proceedings take place in an electronic format and the number will increase. Also, according to World Bank data, South Korea has really good results in resolving economic disputes via our electronic system,” Yang Sung-tae said about his country’s experience.

Regarding the increase of requirements for judge candidates, a similar reform was implemented in South Korea five years ago. The number of years of experience required for judges increases every year, he said. By 2025, the required experience will be a minimum of 10 years. “If a judge has a lot of experience, people give him their trust. So in that direction, Kazakhstan has also chosen the right path,” he added.

Cooperation between Kazakhstan and South Korea started in 2000. “The chairmen of our Supreme Courts have met several times. Also, one of the judges of Kazakhstan’s Supreme Court has participated in an educational programme in the Korean Court. Now he works in Kazakhstan and plays a big role in the development of the judicial system in his country and the cooperation between our countries,” Yang Sung-tae noted.

Both countries are interested in further cooperation, he said.

“I hope that the cooperation between our two countries will continue and the exchange programme will be restored. The Korean Supreme Court thinks that international relationships with other courts are very important. We hope that in the future our relationships will become even stronger,” he said.