ASTANA – Seven were reported killed after the June 5 terrorist attacks on two weapons shops and a military unit in Aktobe. 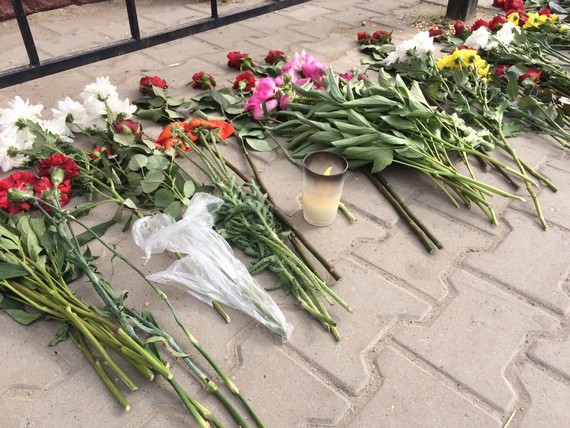 On June 8, citizens of Aktobe bid farewell to the local victims of the attacks: Pallada weapons shop assistant Andrei Maksimenko; retiree Nikolai Onischenko, who happened to be near the store at the moment of the attack; and Mikhail Matrosov, a fisherman who had come to the nearby Pantera shop to buy gear.

The 44-year-old Maksimenko was killed immediately after terrorists stormed the building, dying on the spot from the knife injuries he received. According to his widow, he had worked for four years in the shop. Though injured, he managed to press the alert button. Two security guards from the Kuzet Company responded to the alert and were attacked. One of them, Merkhan Tazhibayev, died; his colleague was injured.

Onishchenko, a 68-year-old pensioner, died one day before his birthday. According to his wife, he had gone to pick up some vegetables. On his way home, an armed crowd from the Pallada shop reached him and pulled him from the car. The elderly man resisted and was shot. His widow saw the events unfold from the balcony of their apartment and remains in serious shock.

According to Tengrinews, Matrosov was going to buy fishing gear at the Pantera weapons shop, where some of the attackers went following the Pallada shop attack. Matrosov and his brother were planning a fishing trip. His wife says that he must have resisted the attackers, because his hands had injuries. Matrosov died; his brother was injured.

On June 7, Akim (Governor) of Aktobe Region Berdybek Saparbayev visited Maksimenko’s and Onishchenko’s relatives and, along with deputy head of the Nur Otan party Mukhtar Kul-Muhammed, expressed condolences to the families of Onishchenko and Matrosov.

After the shops were attacked, the local National Guard unit confronted the attackers, with three servicemen reported dead. Their bodies have already been sent to their homes.

Forty-year-old Major Daniel Mailybaev, the senior detective officer of the Military Counterintelligence Department of the National Security Committee of the Regional Command Batys of Kazakhstan’s National Guard, was killed in the fight. He had a wife and four children. He was buried in Talgar in Almaty region.

According to Aktobe’s regional health department, 19 people were injured during the operations, including six military men, six policemen, four criminals and three civilians. One of the soldiers is in intensive care; the rest are reported in stable condition.