By Aiman Turebekova in International on 25 June 2016

ASTANA – The manifest “The World. The 21st Century” and his nation’s moral right to advance such proposals was one of the topics addressed by Kazakh President Nursultan Nazarbayev in a recent interview with TASS First Deputy General Director Mikhail Gusman. 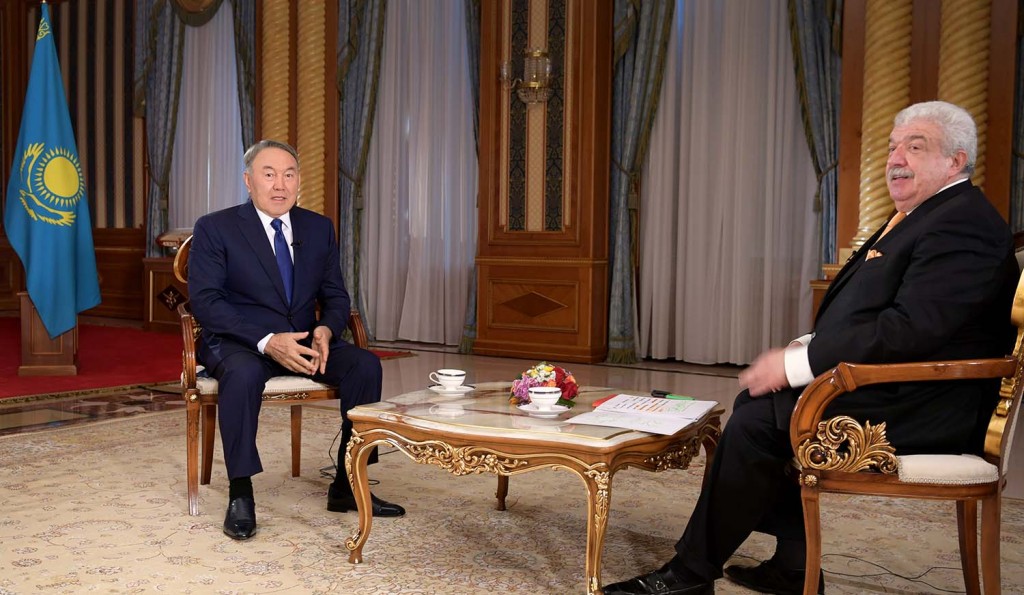 “First, 26 years ago we made a tough decision to close the Semipalatinsk nuclear test site. Secondly, we made the same difficult choice to abandon a nuclear and missile arsenal that was located in Kazakhstan. I am not going to tell you how many people have suffered; an area equal to Belgium’s size was contaminated [with radiation] because of tests at the Semipalatinsk test site and people in the third generation feel the consequences of the exposures. This was a problem [and] we were left alone,” said Nazarbayev.

He maintained the trust between nuclear weapon countries has been declining because the world’s combined inventory of nuclear warheads remains at a very high level.

“There are 15,000 nuclear warheads, of which almost 4,000 warheads are deployed with operational forces. Approximately 93 percent of all nuclear warheads are owned by Russia and the United States, who each have roughly 7,000 warheads in their military stockpiles. The other countries have the remaining 1,500 nuclear missiles. Weakening confidence causes colour revolutions. As a result, while a state is falling apart it turns into a hotbed of extremism,” said the Kazakh leader.

Nazarbayev emphasised the manifest that he presented earlier this year has a very specific algorithm of steps that countries need to do to overcome their distrust of each other.

“It is necessary to raise the entire population of the globe, all people of good will and especially all parliaments, until it is not too late to address this issue,” he said.

The head of state participated June 17 in the 20th St. Petersburg International Economic Forum. Nazarbayev noted it was very important to meet with Russian business leaders to exchange views on investment opportunities in Kazakhstan and its achievements since the formation of the Eurasian Economic Union (EAEU).

The President also spoke about his extensive meeting with Russian counterpart Vladimir Putin. They discussed regional and policy issues and concerns about terrorism as well as the development of the EAEU and bilateral relations between the countries.

“Thus, I highly appreciated the event. We organised the Astana Economic Forum before this forum. They somehow complement each other,” he said.

Gusman asked Nazarbayev about the prospects of the Shanghai Cooperation Organisation (SCO) and Kazakhstan’s role in the group.

Recounting its history, the Kazakh leader emphasised the important role of the organisation on several fronts: the security of the region, economic and humanitarian cooperation and transport and logistics through SCO member countries.

“At a meeting in Ufa [in 2015], we agreed to adopt the SCO programme on combating terrorism that is very crucial. I proposed the creation of a free trade zone with the Eurasian Economic Union and the SCO. It has been considered by member states and is supported by the Russian side. Today, we are taking a very important step towards admission of new members such as India and Pakistan. We also consider the joining of Iran,” said Nazarbayev.

He added SCO’s main goal is not to become an amorphous and bureaucratic organisation such as the Commonwealth of Independent States (CIS).

“I believe that the CIS has a right to live. We agreed last time that we would reduce bureaucracy and meet once or twice a year to discuss feasible questions and make decisions. For instance, our military authorities exchange experiences and information with each other and conduct general security work in our territories. Therefore, the CIS can develop and become a much more successful organisation as a platform for dialogue,” said Nazarbayev.

Speaking about the relationship between Kazakhstan and Russia, he noted it is not necessary to compete with each other; the countries need to work together.

Gusman inquired about Kazakhstan’s 100 Concrete Steps and which portions of the initiative have been enacted.

“All last year we worked hard to ensure the legal framework of these reforms. Together with the Parliament, our government has been working actively and get 59 laws passed to implement these reforms. During the first quarter of this year, 25 steps have already been implemented and started to work. I am determined to finish all 100 points,” said the head of state.

The discussion also turned to the role of Astana as a moderator. The city hosted the Organisation for Security and Co-operation in Europe (OSCE) summit for the first time in 11 years, it hosts the triennial Congress of Leaders of World and Traditional Religions, while the international exhibition EXPO 2017 will be held in the capital next year.

“This year, we want to commemorate the 25th anniversary of the closure of the Semipalatinsk test site and invite scientists, nuclear physicists and politicians to once again draw the attention of the world community to a very big threat to all humanity. Fifteen thousand nuclear warheads can destroy the entire planet multiple times. Nobody can think about it. We speak of an ecological catastrophe, global warming and so on. I believe that this is a very serious matter and everyone should be concerned with it,” said Nazarbayev.