May 29 marked two years since the day the Treaty on Eurasian Economic Union (EAEU) was signed in Astana. Chairman of the Board of the Eurasian Economic Commission (EEC) Tigran Sargsyan spoke to the Kazakhstanskaya Pravda newspaper about what the integration union is and what has changed with its emergence for EAEU citizens and businesses. 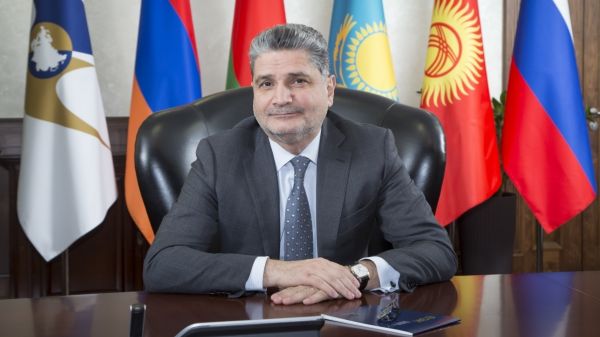 The Treaty on the EAEU is now two years old. Has the union gained any global recognition so far?

A huge amount of work, creating real results, was done over a fairly short period of time. The interest in our economic project from the more than 40 countries that have expressed a wish to develop trade and economic cooperation with the union is evidence of that. An agreement on establishing a free trade zone between the EAEU and Vietnam was signed last year and the advisability of entering into agreements with India, Egypt, Israel and Iran is being negotiated.

At the initiative of Kazakh President Nursultan Nazarbayev, chair of the EAEU in 2016, deepening economic relations with third countries and integration unions are priorities of the EAEU this year.

The Asian aspect of our international cooperation is developing. Memorandums of understanding were recently signed between the EEC, Cambodia and Singapore. Both parties are interested in deepening cooperation, down to signing an agreement on a free trade zone. The commission is in dialogue with the Association of Southeast Asian Nations (ASEAN) and discussing coupling the integration processes of our union with the Shanghai Cooperation Organisation (SCO).

We are also successfully cooperating with countries and unions of Latin America – the commission has signed memorandums of understanding with Peru and Chile, and discussions on concluding a memorandum of cooperation on trade and economic issues with the common market of South American countries (MERCOSUR) are being conducted.

Regional economic integration is a defining trend of the modern world. Countries understand that jointly overcoming new challenges and risks is more efficient in the quickly changing conditions and the uncertainty of the global economic environment. In that sense, the EAEU is developing in the mainstream of a global trend.

The EAEU’s international activity, including concluding agreements on free trade zones with third parties, will foster the development of export products from countries of the union, attract investment and support the economic growth of the EAEU as a whole by creating conditions for the diversification of trade and economic relations.

Increased cooperation with China is also being discussed, and the EAEU and that country have decided to link the EAEU and China’s New Silk Road Economic Belt programme. Have any steps been taken on this so far?

On May 20, at the EEC session of the Intergovernmental Council in Yerevan, the commission received a mandate for conducting negotiations with China about concluding an agreement on trade and economic cooperation between the EAEU, its member states and China. This is big step forward. It means that our five countries will be jointly holding negotiations in a single format.

How can the EAEU and China cooperate?

An advisory panel examined offers from Chinese businesses and countries of the union. The list of prospective EAEU projects to be linked with the New Silk Road Economic Belt was agreed upon. We plan to discuss an agreement on trade and economic cooperation between the union and China. To reflect the interests of the EAEU business community to the utmost is our main goal here. If our manufacturers can enter the huge Chinese market, this will be create huge potential for the development of the union.

What has the EAEU done to support business so far?

A simplified procedure for declaring international carriage of vehicles registered inside countries of the union was legislatively fixed and is being implemented in the EAEU.

The first phase of the four-stage programme of liberalisation of coastal shipping by car began Jan. 1 this year …

Work on providing access to state procurement markets to companies from EAEU countries is being conducted. Today, mutual access is already provided for companies from Belarus, Kazakhstan and Russia.

Technical regulations were developed and accepted within the EAEU that will allow optimal requirements for providing a necessary level of product safety to be established … this means reducing costs and removing trade barriers for business. … Manufacturers and importers do not need to adjust to various national standards.

A single market of services has been launched. What does it mean? What has changed for businesses with its emergence?

Now, 43 sectors are part of a single market of services, in total being over 25 percent of the gross domestic product of each member state. Work on liberalising 21 more service sectors is underway.

As part of the single market of services, service suppliers are provided the highest attainable standard of freedom, which includes supplying and receiving services without limitations, withdrawals and additional requirements, except for certain cases …

Does the EEC discuss its decisions with the business community?

We are in constant dialogue with the business community. The interaction is carried out via council committees and work groups. Creating favourable conditions for the efficient development of business inside countries of the union, improving regulatory systems and reducing barriers are the main tasks of the commission. We strive to promptly respond to requests by entrepreneurs. Eliminating the remaining barriers is necessary for this. The earlier they are withdrawn, the faster we will establish a united market and the more comfortable business entities will feel. Expanding the range of authority passed by countries to a supranational level is equally important. This will allow the EEC to actively render assistance to businesses.

Common markets of pharmaceuticals and medical products were started this year, but they are working in a restricted mode, as not all the necessary documents were accepted. What are the difficulties and when will the markets be working at full capacity?

The pharmaceutical field is developing very fast inside EAEU countries and the main task is to create equal conditions for all participants of common markets and stimulate competitiveness. The adoption of several second-level regulatory documents is being postponed because of a difficult discussion about how to implement the registration of new medications and how to avoid creating advantages for certain business entities. Without them, common markets of pharmaceuticals and medical products cannot work fully. But the discussion is being conducted and all issues will soon be overcome.

What about citizens? How has the union benefited them?

By establishing a common labour market, first of all. Working people from EAEU countries now have significant advantages over migrant workers from other countries. Particularly, they have an opportunity to stay inside the country without registering with migration service agencies for 30 days instead of seven. They have the right to social and medical provisions, including free care in clinics …

Moreover, the mutual recognition of diplomas is valid for all technical and most humanitarian specialties (except for pharmaceuticals, medicine, law and pedagogy.) Work on an agreement regarding pension provisions is in the final stage. After its signing, citizens of the EAEU will be able to receive a pension for the period of their labour activity from the state of the union where they were working, even if they are not its citizens.

The problem of double taxation of value-added tax (VAT) when individuals import goods of personal consumption and during transmission of material assets by structural units of one legal entity located in  different states of the union was also resolved.

The process of decreasing prices for roaming has also begun.