By Anuar Abdrakhmanov in Sports on 4 June 2016

TURIN – The Astana Pro Team, part of the Presidential Sports Club, once again confirmed its status as one of the best cycling teams in the world. Captain Vincenzo Nibali proved he has strong spirits, winning the Giro d’Italia 2016 after a poor second week at the multi-day event. 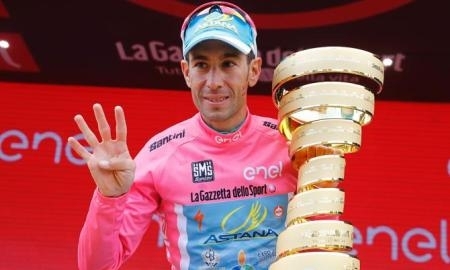 The race was held May 6-29 in the foothills of the Western Alps and the last week saw developments that nearly turned it upside down. Before the start of the decisive mountain climb, Nibali lost more than four minutes to the holder of the pink jersey, general classification leader Steven Kruijswijk of LottoNL-Jumbo. It seemed cutting that lag was something fantastic. In the 19th stage, however, where riders rose to the highest mountains of the race, Nibali showed who was who.

Cycling is full of surprises, some of which are unpleasant, and Kruijswijk’s fall played a role in the final outcome. On the way down the mountain the Dutchman fell and was injured, which unfortunately excluded him from the fight for victory in the general classification.

Given this change of events, Nibali decided to attack. Neither Spaniard Alejandro Valverde of the Movistar Team nor Colombian Esteban Chavez of Orica-GreenEDGE could meet his challenge, as racers had to face serious fluctuations in temperature when exhausting heat was replaced by chilliness while climbing the roads among the snow-capped Alps. Nibali’s attack secured a stage win and helped him climb into second place with a slight lag behind Chavez.

“We showed a good team and work and tactics. Nibali is our captain and his shape means a lot to the team. Tactically, we acted well. Two guys were sent to a breakaway group. We are very glad that our young Kazakh rider Bakhtiyar Kozhatayev played a role, too, in assisting Vincenzo today. Nibali found his feet and met the challenge like a true champion,” he said.

Astana’s fans had reason for concern before the decisive battle for the pink jersey. Could Nibali recover after such a difficult stage and overcome a 44-second disadvantage at Chavez’s back? Vinokourov was right to point out cycling was at least partly a team sport and a good team nearly always wins. Strong partners turned out to be a key factor in Nibali’s eventual success. Tanel Kangert, Michele Scarpone and Jakob Fuglsang – all pulled out and secured and laid a solid foundation for the club’s victory.

What about Nibali? He showed he was the strongest in the race and at its critical moment demonstrated an incredible will to win. The Italian captured more than a minute and a half from Chavez to overtake the Colombian in the overall standings. Valverde took third place, leaving Kruijswijk behind the podium.

“At times I thought everything had been lost. But at the same time, I understood that the race was not over yet. I knew that something could change in the last week. I never gave up. During the last Tour de France I had bad days. But I always try to come back. This Giro was crazy – I felt the pressure on me as a favourite to win. The race itself was exhausting. But I coped with this pressure and we created a big show [and drama],” said Nibali following the race.

Astana Pro Team’s sports director Alexandre Shefer called the victory one of the most difficult for the Kazakhstan-backed squad in recent years.

“The team worked brilliantly. The entire Giro we were up and down. But the last two days were spent on the maximum. Frankly, many did not expect this result. For Vicenzo, one day was normal and another was not. But yesterday he showed his class and has set the bar high. Of course this is his victory first of all, but also of the entire team, of all the guys who believed in him to the end and worked hard to secure his success,” he said.