ASTANA ­– EXPO 2017 Commissioner Rapil Zhoshybayev discussed bilateral cooperation at the Vatican April 30 with Cardinal Peter Kodwo Appiah Turkson, President of the Pontifical Council for Justice and Peace and recently appointed Commissioner for the Vatican’s section at EXPO 2017 in Astana. 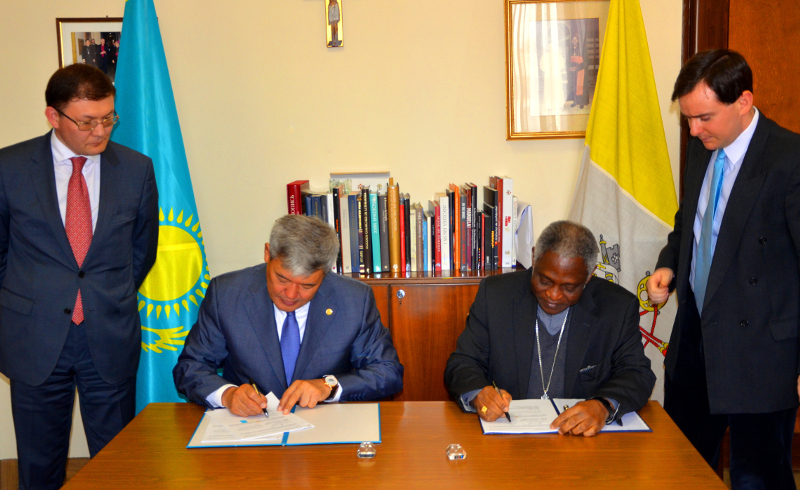 Turkson praised Kazakh President Nursultan Nazarbayev’s contribution to developing global interreligious accord through the Congress of Leaders of World and Traditional Religions. He also noted the large role the Assembly of the People of Kazakhstan plays in ensuring peace in Kazakhstan.

The Kazakh EXPO2017 Commissioner thanked Turkson for supporting and participating in the religious congresses. He also briefed Turkson on expo preparations and the sides agreed on the location of the Vatican’s pavilion.

Zhoshybayev added that the Vatican’s participation in EXPO 2017 will spread spirituality, conveying cultural and spiritual messages through world art masterpieces.

According to the Cardinal, in 2009, the Vatican installed the largest solar panel in Europe with a 100MW capacity on the roof of Paul VI Audience Hall at a cost of $600 million. This made the Vatican the first solar-powered country and the world’s “greenest” state. The Vatican has reduced its carbon dioxide (CO2) emissions by 225 tonnes per year.