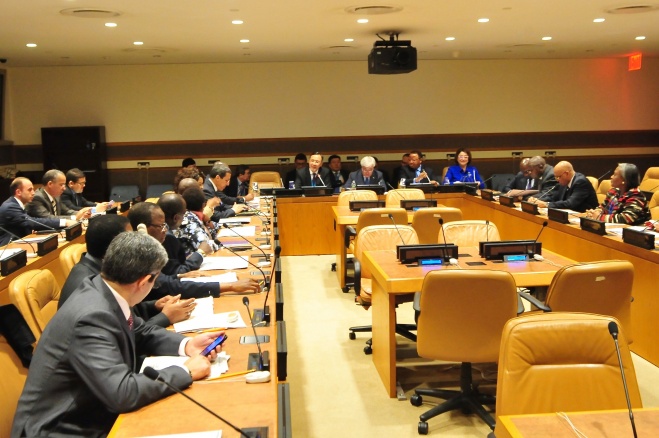 Kazakh President Nursultan Nazarbayev put forward the initiative to hold the forum designed to build upon the efforts of the UN to combat violent extremism and promote peace and security at the 70th session of the UN GA in September 2015, as well as at the meeting with UNESCO Director General Irina Bokova in Paris in November 2015. The proposal found backing from UN Secretary General Ban Ki-moon, the Organisation of Islamic Cooperation, the UN member states and leaders of religious congregations and international NGOs.

Idrissov, in his address, stressed that the forum testified to the joint response from UN member states and faith leaders to Nazarbayev’s initiative to break the alleged links between terrorism and religions.

“The attendance of so many distinguished figures at this high level conversation clearly reflects the importance and urgency of the crisis we face. The task is clear. Our great faiths, with their common values, should be a major asset in bringing people together and promoting peace,” he said.

UN General Assembly President Mogens Lykketoft stressed the importance of the forum’s theme. “Terrorist attacks all over the world demonstrate very clearly that achieving harmony and strengthening intercultural and interreligious dialogue is a great challenge and perhaps more important today than at any time in our recent past. Violent extremism is a particularly serious concern,” he said. According to him, a constructive exchange of views of leaders in this area is designed to ensure that all world religions have made a substantial contribution to combating terrorism and the ideology of violent extremism.

High Representative of the UN Alliance of Civilisations Nasser Abdulaziz Al-Nasser thanked the Kazakh delegation for the initiative and representatives of all religions for voicing their concerns and putting forward their practical recommendations at the forum.

As one of the essential means of strengthening global security, Idrissov highlighted the fight against the threat of nuclear weapons and the “virus of war.” In this context, he presented the participants with President Nazarbayev’s recently announced Manifest, “The World. The 21st Century.”

“We call upon religious leaders to endorse the concept of a world free of nuclear danger and actively participate in a global drive to make this dream a reality. We must also admit that durable peace is not achievable without measures to restore mutual trust between states,” he added.

According to Idrissov, Kazakhstan also believes strongly that peace and development must be the central pillars of a strategic plan to commemorate the 100th anniversary of the UN and deliver the vision of a nuclear-weapons-free world by the date.

“I can promise our country, if we are successful in our bid for a non-permanent seat on the UN Security Council for 2017-18, will spare no effort to work with the international community to drive progress towards these important goals,” he stressed. Idrissov also noted that on May 31 Astana will host an international conference under the title “Religions Against Terrorism,” which will bring together faith leaders, politicians, and academicians to elaborate working recommendations on tackling the harmful ideologies of violent extremism.

Earlier, on May 5, Idrissov attended the seventh annual dinner with American religious leaders, representatives of the U.S. administration, experts and the U.S. business community.

The meeting discussed the issues of religious tolerance promotion, interfaith understanding and countering violent terrorism in the context of international initiatives of Nazarbayev and his Manifest.

According to a press release from Kazakhstan’s Embassy in Washington, DC, President of the Asia Policy Society Institute and former Prime Minister of Australia Kevin Rudd commended Kazakhstan’s efforts in promoting mutual understanding and respect between religions and cultures. Among other participants, U.S. Representative Steve Israel (D – New York) expressed on behalf of the American people gratitude to Kazakhstan for the leadership and contribution to the global process of interaction between different religions and cultures.

The participants exchanged ideas in the context of the decisions and objectives of the Fifth Congress of Leaders of World and Traditional Religion held in June 2015 in Astana, as well as discussed issues related to the role of religious leaders in building a world based on tolerance, mutual respect and cooperation.

More than 30 representatives of various religious movements in the U.S., including Protestantism, Orthodoxy, Mormonism, Hinduism, Islam and Judaism, and others, attended the event.

The annual dinner with religious leaders in America that was launched in 2008 found broad support, both in religious and political circles of the U.S., as well as became an effective forum for further strengthening relations between Kazakhstan and American societies, the Kazakh Embassy in Washington said.

The Kazakh foreign ministry also reported that while in New York Idrissov held working meetings with regional groups of the UN to discuss Kazakhstan’s bid for a non-permanent membership in 2017-2018.

Idrissov’s visit in New York concludes on May 10 with participation in another High-Level Thematic Debate at the UN General Assembly titled “In a World of Risks: a New Commitment for Peace.”