By Zhanna Shayakhmetova in Nation on 18 May 2016

ASTANA – “Between Sky and Earth,” highlighting ideas and solutions from leading thinkers, curious minds and captivating orators, will be the topic of this year’s Technology, Entertainment and Design (TEDx) Almaty meeting. The conference will be held Oct. 5 and the “x” represents an independently-organised event. 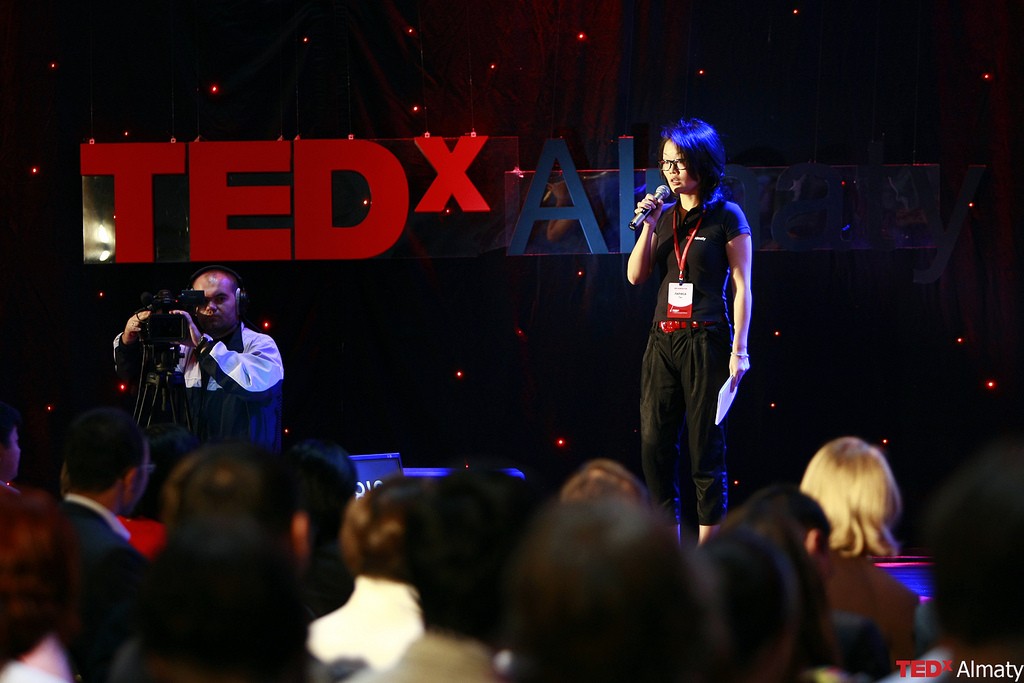 The Astana Times interviewed TEDxAlmaty curator Larissa Pak, a newly-appointed TEDx Ambassador in Kazakhstan, to learn about the local community of innovators and free knowledge phenomenon.

Pak is known as one of the early PR specialists in the country. Among other degrees, she graduated from Harvard Business School and made her career in marketing and corporate communications. She then set on a mission to travel to 30 countries in a year to interview people who did a meaningful vocational shift.

“To me, the most important thing is what I am doing for TEDx as curator and organiser. We have been doing TEDx events for six years. It all started as an experiment and hobby because at that time I was engaged in professional activities. But I started feeling the hunger for insightful and meaningful dialogues, not only among friends but in society,” said Pak.

The initial TEDxAlmaty conference took place in 2010. Six conferences were subsequently held in the city in addition to TEDxAstana in the capital in March 2015.

“This year’s topic reflects what we are all experiencing, the so-called gap – the gap between what it should be and how it actually is, what our dreams are and what is our reality. This topic will connect people who through their ideas and projects connect the so-called sky and earth,” she said.

“TEDTalks became a true revolution and it was a revolution in access to knowledge. Now we are entering an era of knowledge. And TED is important because we are not going in the depth of knowledge, but to the understanding at the level of concepts. We must constantly expand our horizons to connect the different areas, and then come an inspiration and new thoughts,” said Pak.

She began by surrounding herself with a community of like-minded enthusiasts who assisted in organising the talks, thus establishing a TEDx movement.

“When we started to organise the event, it was on the level of impossibilities. It was on the level why it was necessary to do it. First of all, nobody knew about TEDTalks. Short, powerful speeches and ideas can and do change your views and understanding of the world. Talking about complex things in accessible and simple language is the key,” she noted.

One of Pak’s first experiences as curator was proposing an idea for a TEDx to her friends.

“I was absolutely convinced that it is an interesting and important project for Kazakhstan,” she said. “Smart, extraordinary and aspiring people around us make our life exciting. I gathered a team that still does TEDx. The first event was a complete experiment. We are all terrible perfectionists and we were worried whether there would be high-quality ideas and performances. But it has turned out well. Before the actual event, we also conducted about 20 meetings where we just explained what TEDx is and why it is important to join us.”

“I would like to appeal to the readers to recommend the speakers. We look for personalities who work in our country and whose ideas lie in the field of science, technology, innovation, education, business, art and architecture and they have powerful ideas,” said Pak.

TEDxAlmaty organisers present themselves as a high-quality media platform for speakers whose minds are open to something new and whose ideas are like vessels that sail to the communities. In addition to curators who supervise the speakers, there are individuals engaged in logistics, volunteers and specialists working with conference participants.

“Everyone on our team is highly professional and in-demand experts in their field. Once we invited our legendary marathon runner Marat Zhylanbayev, who is listed seven times in the Guinness Book of Records. His fame was during the Soviet time period. Then, he walked away from the sport and his achievements were forgotten. In 2013 after he performed at TEDx, he came back to sports for training others. A huge contribution to this renaissance was his speech and work with my colleagues,” she added.

The preparation for the event is a hard-working process. The speaking coaches explain the methodology to the lecturers, collect all his or her information and build it into the storyline. Olga Kaplina, Alexander Lee, Alexandra Tsai, Askhat Yerkimbai, Bota Zhumanova and Pak, each of whom has different experiences, motivations and a certain interest in the field, work exclusively with the speakers.

“We always tell our speakers that having an idea is the most important requirement. And our work is only to help organise the beauty of it, to help it shoot. With the talk, we should find a door to the brilliant mind of an audience. People take time to watch us online or attend our events and it is our responsibility to do an event worth watching,” said Pak.