ASTANA – A traditional small kurultai (assembly) of Kazakhs in Europe was held May 14-15 in Cologne, Germany, and gathered about 2,000 representatives of ethnic diasporas from Germany, the U.K., France, Hungary, Austria, Switzerland, Sweden, Denmark, Norway, the Netherlands, Turkey and the U.S. 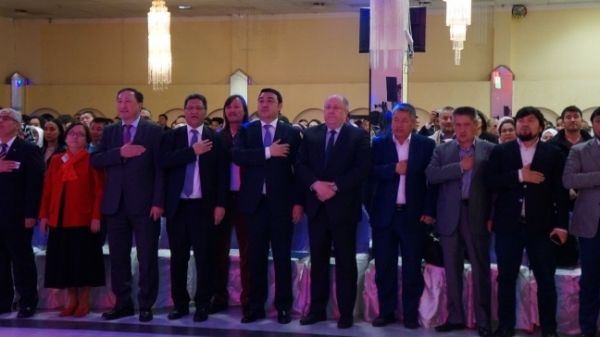 At the opening ceremony, Ambassador of Kazakhstan to Germany Bolat Nussupov read a message of greetings from President of Kazakhstan Nursultan Nazarbayev to kurultai participants. Nazarbayev congratulated the Kazakh diaspora on the upcoming 25th anniversary of Kazakhstan’s independence and emphasised the importance of preserving and developing the native language, culture and national traditions.

“For example, a library including works of classical and modern Kazakh authors, magazines and newspapers, Kazakh media, textbooks, dictionaries, manuals for studying the state language, as well as print and electronic brand products about Kazakhstan was created in the Kazakh Centre of Economy and Culture in Berlin in 2014. All these materials are available for representatives of the Kazakh diaspora and are highly in demand,” the President said in a statement.

Deputy of the German Bundestag Henry Tsertik stressed the importance of supporting the development of ties with their historical homeland for the 800,000 ethnic Germans who migrated from Kazakhstan in the 1990s and paid special attention to the identity of ethnic Kazakhs living in Germany.

Tsertik said the German nation remembers and appreciates how the Kazakh nation accepted Germans into their families and saved them from death during Stalin’s deportations from the Volga region in the 1940s.

“It will never be forgotten; both the older and younger generation will bear it in themselves,” noted the German politician.

During his speech, head of European Association of Kazakhs Abdul Qayyum Kesichi noted that the holding of congresses in Europe had become a positive tradition over the last 10 years.

“The main purpose is to remind the younger generation of the heritage and culture of their nation. Such meetings are very important for Kazakhs living away from their historic homeland,” a press release from the Kazakh Ministry of Foreign Affairs quoted Kesichi as saying.

Contests and competitions were held and an exhibition of paintings and applied artwork by Kazakh artists was opened as part of the kurultai.

The Kazakh community in Germany has more than 7,000 people. They are mainly ethnic Kazakhs whose ancestors moved to that country from different countries several decades ago.