TASHKENT – At the meeting here of the Council of Foreign Ministers of the Shanghai Cooperation Organisation (SCO) member states on May 24, Minister of Foreign Affairs of Kazakhstan Erlan Idrissov emphasised that in today’s reality, ensuring security and stability has become one of the primary tasks of the organisation. 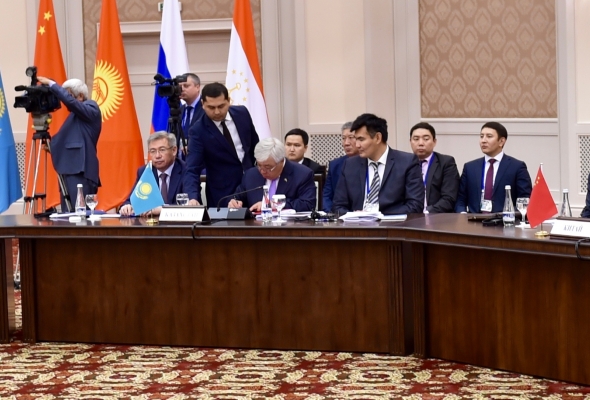 “In addition to preventing traditional threats, the SCO should fight against the new world evil, terrorism,” said Idrissov. In this context, he outlined a number of key initiatives of President of Kazakhstan Nursultan Nazarbayev aimed at restoring confidence in international relations, including the Manifest “The World. The 21st Century.”

Stressing a dominant role of the United Nations in the fight against terrorism, Idrissov drew attention to the importance of the early adoption of a comprehensive UN convention against terrorism and creation of the global antiterrorist coalition (or network) under the auspices of the UN, as proposed by the Kazakh President.

Idrissov also emphasised that at the present stage, the main vector of the SCO member states should be ensuring long-term economic and trade cooperation among the organisation’s member states through the creation of production and processing, transport and social infrastructure.

“Building ‘bridges’ among the Eurasian Economic Union, the Chinese initiative ‘Silk Road Economic Belt’ and the SCO are fundamentally important. Working in this area would create a basis for the formation of long-term policy regarding the EAEU of the SCO member states,” the Kazakh Foreign Minister said.

The six participating foreign ministers also discussed the situation and measures to restore peace and stability in Afghanistan, confirmed the importance of a political solution to the crisis in Ukraine based onthe implementation of the Minsk agreements of Feb. 12, 2015, as well as the importance of the settlement of the crisis in the Middle East and North Africa.

During the meeting, the ministers exchanged views on implementing the agreements reached by the heads of SCO member states in 2015 in Ufa, Russia. It was noted that over the period since then, the states have improved their activity in deepening security, economic and humanitarian ties with each other.

The sides also discussed cooperation within the organisation, and place in international and regional affairs.

Following the meeting, the foreign ministers agreed to submit for approval by the council of the heads of the SCO member states during their June 23-24 meeting in Uzbekistan the Tashkent Declaration of the 15th anniversary of the SCO, the action plan for the implementation of a development strategy of the SCO until 2025 and others.

Among the most important decisions initialled by the officials at the meeting was the approval of modalities of eventual accession by India and Pakistan into the SCO.

“This is significant progress and a step that would enhance the credibility and relevance of the organisation. This decision would be taken at the summit of the heads of the SCO member states where these memoranda will be signed,” Idrissov told the Kazakh media after the event.

“The signing of these memoranda will open a direct route to full membership,” Russian Foreign Minister Sergey Lavrov highlighted.

Foreign ministers of China, Kazakhstan, Kyrgyzstan, Russia, Tajikistan and Uzbekistan, SCO Secretary General Rashid Olimov and Director of the Executive Committee of the Regional Antiterrorist Structure of the SCO YevgeniySysoyev attended the May 24 session.