ASTANA – OYLA, Kazakhstan’s one and only popular science magazine, at less than a year old and with a print run of only 20,000 copies has already earned a loyal audience and keeps attracting more attention. 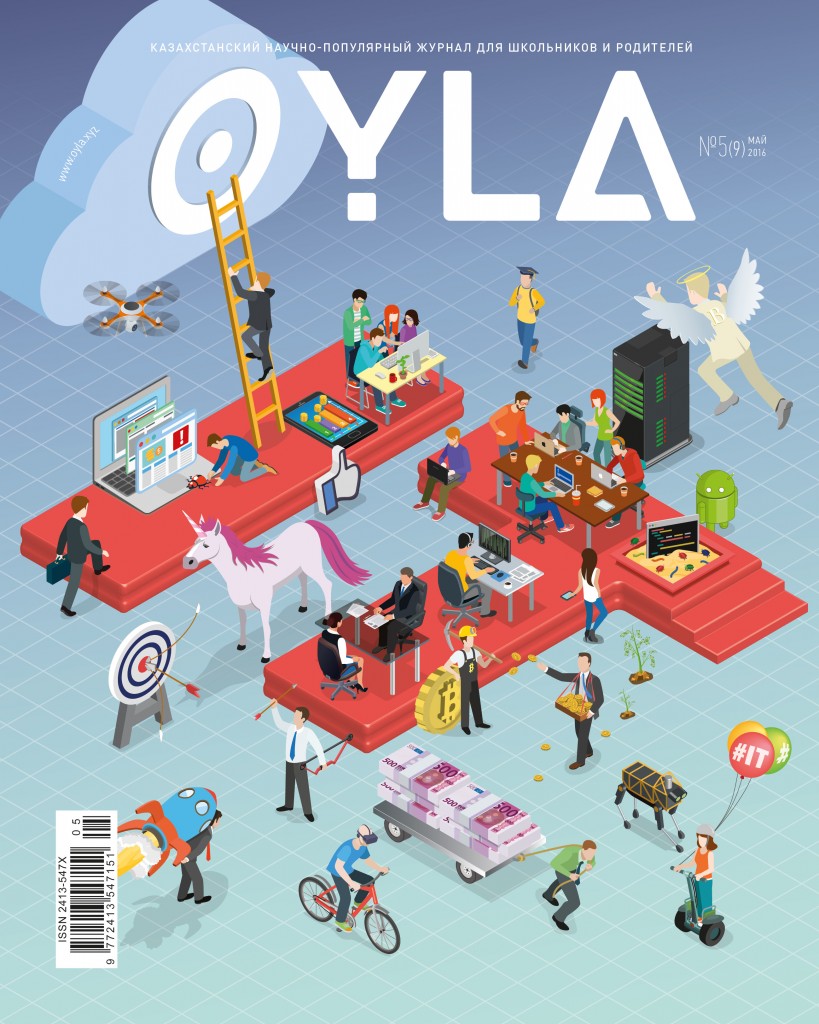 “OYLA gathers thinking and intelligent young people who in the future will be the scientific and business elite of Kazakhstan,” said Assem Zhapisheva, editorial director of the Almaty-based OYLA in an interview with The Astana Times.

According to her, the magazine was originally geared toward students and their parents as its main audience. But today, more than 40 percent of OYLA’s readers are adults without children. They like the content. “This is due primarily to the fact that we are trying to write about the most current topics from the world of science, technology, new ideas and innovations. And the articles are written by competent experts in their fields and scientific journalists,” Zhapisheva said.

She also explained that, “Just a few decades ago, children’s magazines, especially of scientific direction, were very popular. Almost every family received monthly ‘Young Naturalist,’ ‘Young Technician,’ ‘Quantik.’ Today adults, parents remember the articles that were published in the golden years of children’s publications. Reading magazines was not just a form of entertainment – it was a culture-forming activity, due to [the magazines’] huge print run and widespread availability. Children grew up dreaming about space, travel, scientific careers; they had a lot of interests.”

Each issue of OYLA is unique and can take months to plan.

“In our magazine there is no such thing as the ‘average time of the creation of the material.’ Each article is the fruit of thoughtful work by the author, illustrator and editor, and it can take up to several months. Our authors are scientists, businessmen, athletes, journalists, innovators, visionaries, who, together with the editors, generate a huge number of different ideas for materials. Through this, the diversity in our magazine is achieved. Here everyone can find an article of interest, from programming and technology to art and literature,” stated Zhapisheva.

Promoting a new print publication can be quite challenging, especially taking into account that more and more people prefer to use electronic formats. The positioning of the publication plays a huge role in overcoming the dominance of electronic material.

“We position ourselves as a supplementary textbook. Textbooks [in schools] often cannot keep up with the pace of progress in science, becoming obsolete. At the same time, the format of the 45-minute lesson, where the teacher needs both to explain the theme and check the knowledge of the students, doesn’t offer a lot of space for the authors of textbooks and teachers. In our materials, we do not just explain, for example, quadratic equations, but we tell how they appeared. The practical use of this knowledge is that it helps students learn material deeper. After knowing and understanding these principles, the need to memorise the formula disappears, so student will be able to reproduce it,” said Zhapisheva.

The team says that such knowledge is best to be obtained from their printed version. “Also, the study of various aspects of the use of e-books and gadgets for studying say it is still preferable to use paper for children. The magazine forces attention to focus on the subject without being distracted by unnecessary [additions]. In addition, the reading speed from paper is 1.5 times faster than with electronic devices,” she added.

Initially, OYLA had versions in Kazakh and Russian. The Kazakh version had to be shut down, attracting the attention of social network users and generating a great deal of discussion.

“Over 60 percent of students in Kazakhstan are studying in Kazakh, though there is a big lack of literature [and] magazines in Kazakh for children. Therefore, it was initially decided to publish our magazine in two languages in ​​separate editions. But after six months, we saw that while the number of copies and the number of subscribers of the Russian version was constantly growing, the number of subscribers of the Kazakh version hardly reached 20 people, though the feedback from Kazakh language teachers, parents and other professionals was excellent. For example, a lot of the information that we published in our articles could not be found anywhere else in the Kazakh language before the appearance of our magazine. Also, we see the reason for the lack of demand in the simple lack of money among the Kazakh-speaking audience, most of whom do not live in big cities. We are trying to find a way out of this situation, because we believe that knowledge should be available to all,” said Zhapisheva.

In the nearest future, the team is planning to release an application in addition to the publication, which will complement the magazine with more photos, videos and educational games.

In the introduction to the first issue, the team addressed their readers, saying, “Every day, amazing discoveries are made in the world, and how much mankind already knows! And when we see, hear or read something wise, we want to tell everyone about it so they can know too.”