By Zhanna Shayakhmetova in Business on 26 May 2016

ASTANA – International Monetary Fund (IMF) Managing Director Christine Lagarde visited Kazakhstan for the first time May 24, meeting with Kazakh President Nursultan Nazarbayev at the Akorda. The agenda included priority directions of cooperation between Kazakhstan and the fund as well as the key trends in the global financial and economic system.

The head of state noted Kazakhstan has collaborated with the IMF over the past 25 years.

“The fund provided enormous technical and financial assistance in Kazakhstan’s early years of independence. Today, approaching the 25th anniversary of independence, our country is able to implement more in comparison with other post-Soviet countries. Currently the Kazakh economy, as well as the global economy, are in difficult conditions. A number of factors including the decline in commodity prices and the delay of the structural reforms we are implementing, as well as the situation in Russia and the economic situation in China, impact this fact. Despite this, we have not allowed the reduction of the GDP and have ensured positive dynamics which we hope to maintain this year. Our country has been implementing measures to reduce the economy’s dependence on raw materials for over six years,” he said.

Lagarde noted the IMF supports the reforms Kazakhstan has executed in the country’s economic, industrial and infrastructure development.

“I would like to thank you very much for your partnership with the IMF. We highly value Kazakhstan as one of our long-standing members. Very shortly after your independence you joined the IMF and I am pleased that we could help at the beginning and we continue to provide the technical assistance that you want,” she said. 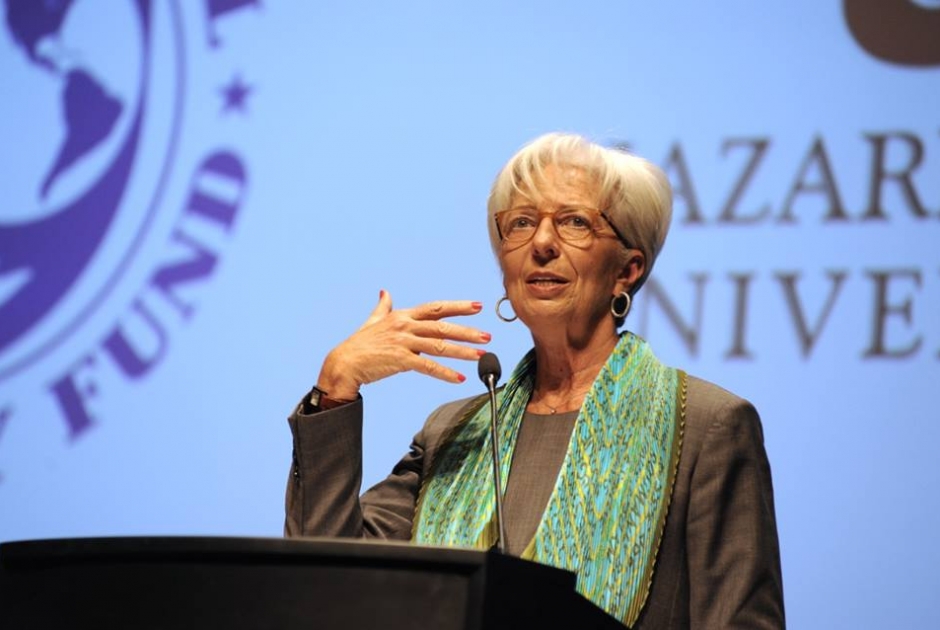 “President Nazarbayev initiated the five institutional reforms and the 100 Concrete Steps programme. Today, we discussed the steps with Ms. Lagarde and the IMF representatives to implement these reforms. I believe that the only way for the country to overcome all the challenges that are currently facing the economy and Kazakhstan, in particular, is a continuation of the economic reforms,” he said.

Lagarde noted Kazakh authorities have taken steps to address new challenges, including the decline in commodity prices and the slowdown of key regional economies, by notably floating the tenge to help the economy adjust.

“The regional roundtable with senior government officials from neighbouring countries provided a unique opportunity to share views on the economic issues facing the region. We were able to deepen the dialogue about the strong policy responses needed to tackle challenges and the many opportunities ahead. We at the IMF believe that the Central Asia region can increasingly serve as a bridge between Europe and China and serve as a hub for new activities in logistics and communications, energy and green industries and agriculture,” she said in a statement at the conclusion of her visit.

The same day, Lagarde delivered a speech to faculty members and students at Nazarbayev University.

“Forging a path for future prosperity therefore requires unleashing new drives of growth. To remain successful, Kazakhstan will have to go through another transformation that may also take a number of years to complete,” she said.

She added Kazakhstan can build a new, efficient and inclusive growth model based on the students’ knowledge and energy. Lagarde also spoke about the perspectives of the global challenges, opportunities for the region and the country, policies to support the region’s next transformation and how the younger generation can contribute to implementing this vision.

“Think not only of the big players who export grain and machinery, but also of the smaller companies and entrepreneurs who will benefit from new opportunities in light industrial goods, biotech, green products and services. These businesses also need the appropriate environment to succeed and flourish… Kazakhstan has gone through several transformations over the years. This year in particular marks a successful transition from a centrally-planned economy to more market-based institutions,” she said.

Lagarde touched on the four key areas that need further action – stronger macroeconomic frameworks, more effective and transparent institutions, a more open and integrated economy and a more inclusive economy. Speaking about the gender issue, she noted Kazakhstan ranks 47th out of 145 in the World Economic Forum’s Gender Gap Index, with higher ratings on economic participation and opportunity, and considered it commendable. Most women, however, are less active in formal sector activities.

Addressing the students as enlightened, empowered and engaged young people. Lagarde challenged them to think about education, embrace technologies and green industries and connect with the world and the IMF.

“Abai Qunanbaiuly, the father of modern Kazakh literature, once said: ‘A strong man may defeat one hundred enemies, but a learned man – one thousand.’ Fortunately there are no enemies in sight, but there will be new challenges that must be conquered. Creativity and innovation will increasingly determine success for your generation. Striving for excellence in math and sciences will equip you with the range of skills necessary to create innovative products and services. For example, this could involve software applications, bio-medical innovations or satellite-tracking devices to ensure the efficiency of cargo traversing across Kazakhstan from China to Germany and beyond,” she said.