Lagarde: Kazakhstan Is a Country with a Promising Future

International Monetary Fund (IMF) Managing Director Christine Lagarde pays her first ever visit to Astana on May 24 to discuss with Kazakh and regional authorities how to address the economic challenges and put Kazakhstan and the region on the right track to growth and prosperity. In this interview with the KazInform news agency kindly shared with The Astana Times, she discusses IMF assessments of economic situations in Kazakhstan, Russia and China, the Fund’s recommendations on tackling the issues at hand, as well as her recent inclusion by Time magazine into the list of the most influential people in the world. 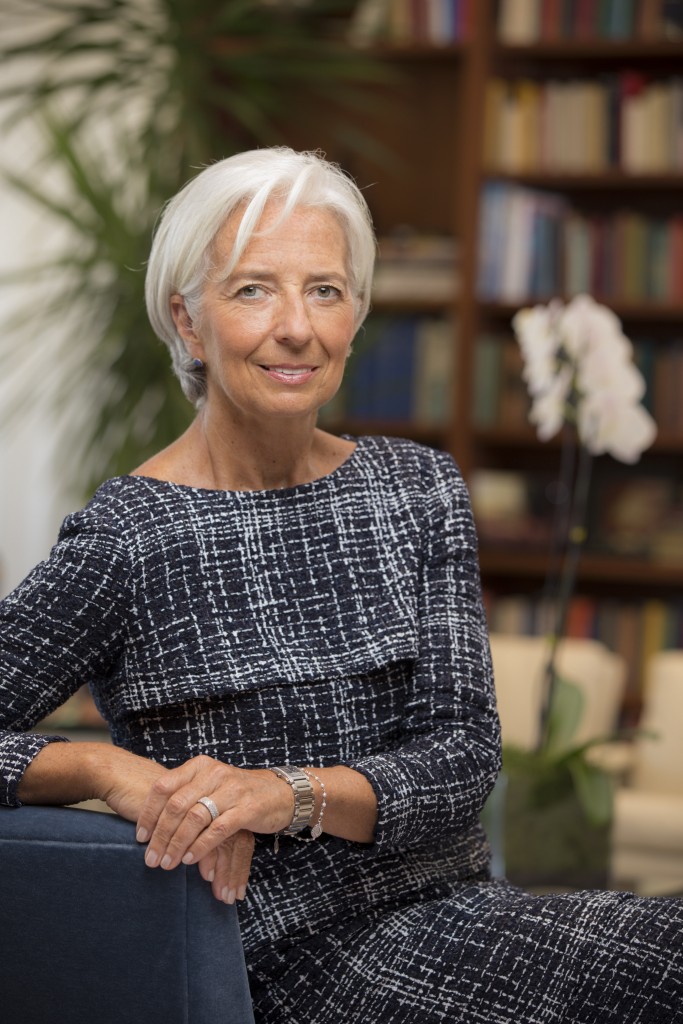 Madame Lagarde, welcome to Kazakhstan. This is your first visit to Kazakhstan and Central Asia. What is the objective of your trip and what are your expectations from meeting with Kazakhstan’s officials?

It is indeed my first trip to Kazakhstan and the region. It is a momentous time for Central Asia, with the 25th anniversary of independence, and it is also a challenging time. The prices of oil and other commodities have declined sharply, growth in key trading partners, such as Russia and China, has slowed, and global financial conditions have tightened. These developments can be long-lasting, and that’s why the regional round table that we are organising together with the Kazakh authorities comes at the right time. We will be discussing how to address the economic challenges and put Kazakhstan and the region on the right track to growth and prosperity. And this will have to involve national policies as well as regional cooperation.

What are your views on the perspectives of Kazakhstan’s economy?

Kazakhstan has achieved a lot since its independence. The past 15 years in particular have been a time of growing prosperity and rising living standards, mostly as a result of increased production and high prices of commodities. Kazakhstan wisely saved some of the earnings from this period, placing them in a national fund. This helped the country navigate effectively through the aftermath of the 2008-09 global financial crisis.

Now the challenges are different. Similar to other oil exporters, the decline in oil prices has had a major impact on Kazakhstan. The country is projected to grow by only 0.1 percent this year, much lower than the average growth rate of 7.5 percent during the last 15 years, which was quite impressive. And we don’t expect growth to pick up very quickly over the next few years, so this is really a big change.

Now, it was important that the authorities allowed the tenge to float and strengthened the monetary and exchange rate policy framework, all measures that we think were appropriate. We think the fiscal framework can also be improved to bring more clarity and sustainability. We are suggesting to consolidate the accounts of the state budget, the local government budgets, as well as so-called “extra-budgetary” funds into one presentation. This will help give a clear position of the authorities’ policy objectives and operations.

If oil prices were to stay more or less at the current levels, there may be a need for the government to respond by shifting some fiscal resources. Some budget items should be cut to control the overall balance and create room to provide more resources for social spending – which is needed to help protect the poor and most vulnerable – and for capital expenditures to help the economy grow and create jobs.

We also recommend that Kazakhstan find ways to diversify away from oil as the prime source of national income. This would include making the business environment and the economy more competitive, more integrated regionally and globally, and more open and inclusive. We know that there is considerable interest in Kazakhstan as a “bridge” between Europe and Asia. This interest – and the financial resources that come with it – are a great opportunity for the country and need to be channelled in a way that promotes growth and jobs.

As you know, the tenge has been devalued lately, what are the IMF views on the current value and exchange rate flexibility?

The devaluation has created new opportunities for exporters, and for producers of goods and services that compete with imports. Of course, the business environment needs to be such that Kazakh entrepreneurs can take advantage of these opportunities, and it is always worth having a look at what can be improved in this regard. But we also should acknowledge that there have been costs to the devaluation, too. Inflation has picked up, and firms and individuals who borrowed in dollars – together with the banks that lent to them – now face more challenging prospects. We therefore think the central bank should use its monetary policy tools to reduce inflation further, communicate clearly about what it is doing, and step up the monitoring of banks.

It is no secret that Kazakhstan, as well as the region, is depending on economies of its neighbouring states – Russia and China. What is the forecast of IMF for these economies and how can Kazakhstan and the region address negative spillovers from these economies?

The Russian economy contracted in 2015, and the recovery has been delayed until later in 2016 due to the additional fall in oil prices. However, Russia’s policy actions have eased the effect of the shocks by allowing the exchange rate to float and adding additional capital to the banking system.

For China, an increasingly important trading partner, we project growth of 6.5 percent this year and 6.2 percent next year. It is true that China faces a challenging period of rebalancing its economy, but China can manage this transition with the right mix of policies and structural reforms.

What should Kazakhstan do about these spillovers? First, as I mentioned on monetary and exchange rate policy, flexibility is the way to go. This has helped stop foreign exchange reserve losses, preserving those buffers for future needs. And currency adjustment has pushed up prices, so monetary policy should focus on inflationary pressures.

Second, on fiscal measures, some additional targeted and temporary spending may soften the impact of the shocks and support economic activity. Yet, with the shocks expected to last and with public debt projected to rise, a move towards fiscal consolidation in the medium term might be needed, always avoiding spending cuts that can harm long-term growth and safeguarding targeted social spending. Overall, it is important for savings to continue to be set aside as a buffer for future generations, and for public debt to remain on a sustainable footing.

This year Kazakhstan is celebrating the 25th anniversary of independence. Your personal opinion about our country, our capital Astana and President Nursultan Nazarbayev?

The country and its neighbours have made enormous gains over the past quarter century, and have much to celebrate. Kazakhstan is a country with a promising future, an important exporter of oil and other commodities, and it is located very strategically between Europe and China. You have also built a truly beautiful and unique new capital in Astana – a great achievement!

What will be the achievements over the next 25 years? I mentioned earlier the importance of diversification and other reforms. President Nazarbayev has set out an impressive plan for Kazakhstan, including the “Kazakhstan 2050” and the “100 Steps” programmes. The reform agenda outlined in these programmes points in the right direction, and we look forward to discussing them in the course of our regular consultations with Kazakhstan.

Recently, Time magazine had you in the list of the most influential people in the world. How do you react to this and your personal formula for success?

It is a great honour to be considered among the most influential people, alongside several other notable personalities. I’m gratified to have the opportunity to have an impact through my daily work, not only by advising government officials on best policies to improve their citizens’ lives, but by visiting our member countries and talking to a wide range of people. It is particularly important to me to be able to share my experience as a career woman with younger generations, and listen to their concerns. They influence me as much as I may be able to influence them.