By Kamila Zhumabayeva in International on 20 May 2016 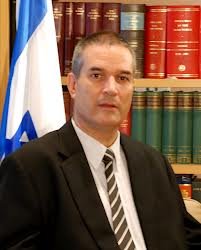 “Kazakhstan and Israel are in very good relations… it’s historic and started even before Kazakhstan’s independence. Jews found refuge during war and it is something that we appreciate a lot,” said Rafael Harpaz, Ambassador and Director of the Eurasia 2 Department of the Israeli Ministry of Foreign Affairs, during a short visit to the capital. “We are facing many of the same challenges, share common values such as both countries striving for peace and stability and have very strong economic and political relations.”

His nation has a large community of Israelis originally from Kazakhstan, most of whom left during the end of the Soviet period, he noted.

“There is a like bridge between the two countries. If you come to visit Israel and say you are from Kazakhstan, people will be very happy. Your culture, your music, your literature is something that we know very well,” he added.

Israeli Ambassador in Kazakhstan Michael Brodsky indicated the trade volume between the countries was quite substantial – above $1 billion throughout many years due to more than $1 billion in oil Israel has bought from Kazakhstan. He stressed the volume is reducing due to commodity prices that dropped sharply last year.

“Almost 15 percent of oil comes from Kazakhstan… I think the economies of Israel and Kazakhstan complete each other. We have a lot of raw material and are very good in high tech and innovation… Thus, there is a lot of interest in the private sector doing business in Kazakhstan,” said Harpaz.

EXPO 2017 is a top event on the nation’s current agenda and last week the Israeli government approved the country’s participation in the exhibition.

“We are going to have a big national pavilion of Israel which will reflect the friendship between the two countries and also the capabilities of Israel especially when it comes to renewable energy – the main theme of it,” said the director. “This is a big event and we are very happy. We will put a significant amount of resources to uncover Israel here, not only for Kazakhstan’s public, but for tourists and people who will come from all over the world.”

The arrangements for the first visit of Israeli Prime Minister Benjamin Netanyahu to Kazakhstan are the second biggest event on which the embassy is working with the Kazakh government. Harpaz noted the importance of the visit, when Netanyahu is expected to meet President Nursultan Nazarbayev and the Kazakh leadership. It is a reflection of the good relations between the countries.

“Side by side, we have activities that we usually conduct such as training and developing assistance and academic cooperation… We are going to create scholarship programmes. There are a lot of Kazakhstan students and doctors who went to Israel and we want to increase their number. This is another important project that we are developing, so the sky is the limit,” he said.

“Our goal as a government is to create conditions that we facilitate and that help both the private and public sector to do business. As the ambassador mentioned, we need to stimulate business and the double taxation agreement elimination is one good example… These are the areas that we will concentrate on,” he said.

Brodsky spoke about one of the projects which the embassy has been working on for the last two months.

“We participated in a Good Deeds Day, an Israeli initiative which has spread worldwide. This year, we decided to take part in this initiative for the first time. We donated a drip irrigation system to a place where 16-17 year old orphans live,” he said.

The ambassador also mentioned an additional project the embassy is looking forward to implementing in the next two weeks. Israeli Water Authority head Alexander Kushnir is planning to visit Kazakhstan to share an experience in water management.

Despite not having enough water resources and a huge problem with drinking water, Israel managed to solve the problem mainly by desalination (a process that removes minerals from salt water), reuse of brackish water and turning it into drinking water, he said.

“Once again, we want to share this experience. We know Kazakhstan is facing some problems with water management and there is lots of water waste,” he said.

“We are very proud to present our achievements over this period of time and of our relations with Kazakhstan. We believe it’s truly remarkable what we have achieved over this very short time, almost 25 years since we established our diplomatic relations. I believe that we haven’t explored all the potential of the cooperation, especially in the economic field. There is still much to be done. That’s what we are focusing and should be working on,” said Brodsky.