Kazakhstan’s Investment Climate Discussed in London, as EBRD Projects Positive Growth for Its Economy in 2016

ASTANA – Kazakh government officials elaborated on initiatives taken to ensure the country is recognised as an attractive investment destination during the European Bank for Reconstruction and Development (EBRD) 2016 annual meeting and business forum in London. 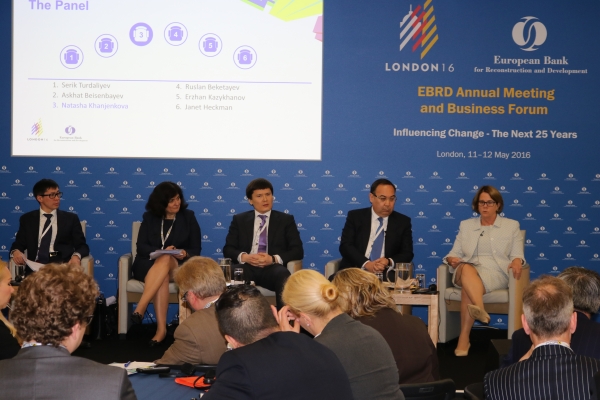 “The government’s reform agenda as well as measures taken by the National Bank have been critical to creating a positive business environment in Kazakhstan. The EBRD projects positive growth for the country and we believe rating agencies are six months behind in their assessment of its economic position,” said Janet Heckman, EBRD Country Director in Kazakhstan.

The panellists also highlighted China’s One Belt, One Road initiative and Kazakhstan’s Nurly Zhol programme. They added the government pre-empted a drop in the price of oil by implementing extensive reforms and is now well prepared to meet the changing economic climate.

“One of the things we did was to amend the state budget computing a price of $30 per barrel and we cut unnecessary spending,” said Beketayev to potential investors. “We anticipated the scenario and we are now fully prepared to meet the challenges. We are comfortable with the current price of $45 a barrel.”

He added the Kazakh government launched a programme to ensure the economy’s financing through multilateral financial institutions such as the EBRD and the World Bank, as well as the country’s National Fund and the private sector.

Beisenbayev told participants Kazakhstan wants to expand and diversify its investment opportunities into areas such as agriculture and tourism. He also noted because of the recent depreciation of the tenge, the Kazakh currency, investors will find a “cheap and skilled labour pool.”

EBRD is celebrating its 25th anniversary this year. The theme of the forum was “Influencing Change–The Next 25 Years” and participants looked at ways to finance green infrastructure investment, bringing together two of the key sustainable development goals – the calls for urgent action to combat climate change and deliver resilient infrastructure.

Green infrastructure is a crucial element in the EBRD regions’ transition story, helping to lay the foundation for economic growth while promoting resource, energy, and carbon efficiency and reducing harmful impacts on the environment.

In the last ten years, the bank invested almost €20 billion (US$22.7 billion) in more than 1,000 sustainable energy and resource projects. The total value of those investments exceeds €100 billion (US$113.5 billion). Since its founding, the EBRD has participated in projects to promote Kazakhstan’s market economy through several renewable energy, mining and agriculture initiatives.