By Zhanna Shayakhmetova in Business on 27 May 2016 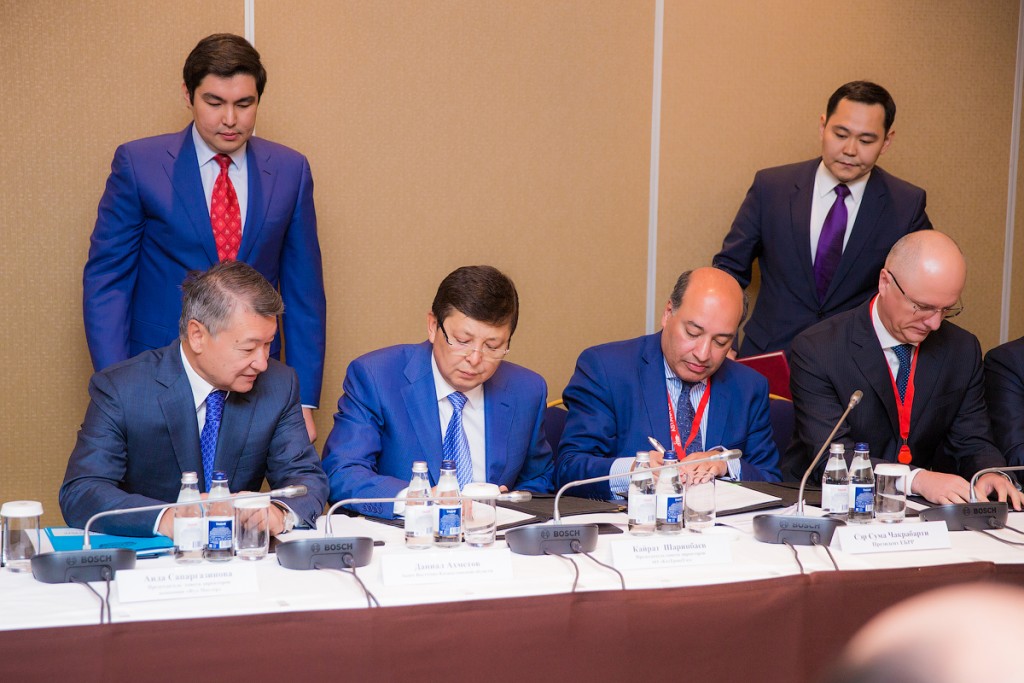 ASTANA – The European Bank for Reconstruction and Development (EBRD) has invested more than $7 billion in Kazakhstan, announced EBRD President Sir Suma Chakrabarti at a May 26 press briefing in the capital.

“We’ve just signed a large number of very important projects. This is all part of the partnership between the EBRD and Kazakhstan and that partnership is going from strength to strength. Last year in Kazakhstan we invested about $800 million in this partnership, mainly in sectors outside oil and gas, and this year we plan [to invest] at least as much again,” he said.

Chakrabarti noted Kazakhstan is the EBRD’s fourth largest market out of 36 countries.

“Many of those countries have a larger population than Kazakhstan. And much of this huge increase of investment in Kazakhstan is really done to reform and innovate here in this country. Reform and innovation plus, of course, our enhanced partnership agreement really underpins all the projects we signed today. They range from vital public services like water and eating all way through energy and agriculture,” he said.

The EBRD lent up to 294 million euros (US$328 million) for two ventures to increase the use of domestically-produced natural gas and largely replace the use of coal. The first project is the upcoming modernising and refurbishing of the Bozoi underground storage in cooperation with KazTransGas. The second is a 52 million euro (US$58 million) loan to KazTransGas-Aimak to expand and modernise the natural gas distribution network in several regions.

In cooperation with the government, the bank will continue to support sustainable public utilities through an extension of existing projects with CAEPCO. The work will modernise district heating in three north-eastern cities – Ekibastuz, Pavlodar and Petropavlovsk.

Water and district heating modernisation in Kostanai and Ust-Kamenogorsk will be continued with three new loan agreements signed the same day.

The EBRD announced plans to finance the expansion of
FoodMaster, a leading Kazakh dairy company, with a loan of up to 15 million euros (US$17 million). FoodMaster will use the loan to upgrade its three dairy processing plants, construct new cow stalls and make other investments in its two farms. In addition to funding, the EBRD also initiated professional know-how exchange with the food and agriculture organisation. A technical cooperation programme with private sector companies was launched to improve milk production and collection and thus boost raw milk supply and the quality of the country’s dairy products.

Chakrabarti also presented EBRD’s Woman in Business Award for promoting gender equality to Baiterek National Holding Managing Board Deputy Chair Lyazzat Ibragimova. He thanked her for working together on the plan, adding it is the first women in business programme in Central Asia.

To date, the bank has invested in excess of 6.3 billion euros (US$7 billion) in Kazakhstan through more than 200 projects in infrastructure, energy, agribusiness, industry and finance. The EBRD is active in all sectors of the economy with a focus on diversification and sustainable energy.