ASTANA – As the threat of terrorism continues to spread around the world, Honorary Ambassador of The ATOM Project, artist and activist against nuclear weapons Karipbek Kuyukov launched his first exhibition in Astana May 21 to remind the global community to increase its efforts toward a nuclear weapons-free world. 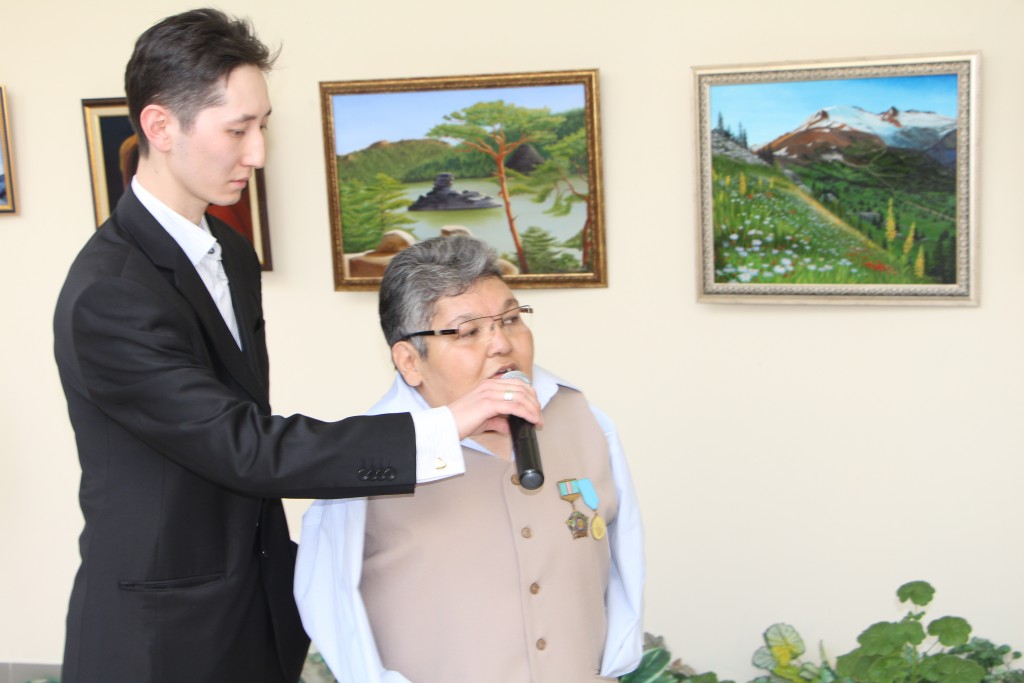 “We are witnessing so many terrorist attacks these days,” Kuyukov said in the exclusive interview with the Astana Times. “The world as never before should raise awareness of the nuclear threats we are facing everyday. At the level of world corruption as it is today anyone with loads of money could simply purchase a nuclear weapon. The consequences of such a nuclear explosion these days could supersede the Hiroshima and Nagasaki hundreds of times. Must we go through something as horrible to be reminded of the sufferings of our ancestors?”

Karipbek was born in a village near the now former Semipalatinsk nuclear test site and was born without arms as a result of his parents’ exposure to Soviet nuclear weapons testing there. He has overcome that challenge to become a renowned artist painting with his mouth and feet and an internationally recognised anti-nuclear weapons activist. This exhibit is his first in the capital of his homeland, Kazakhstan, and will be on display at the National Academic Library for 10 days. 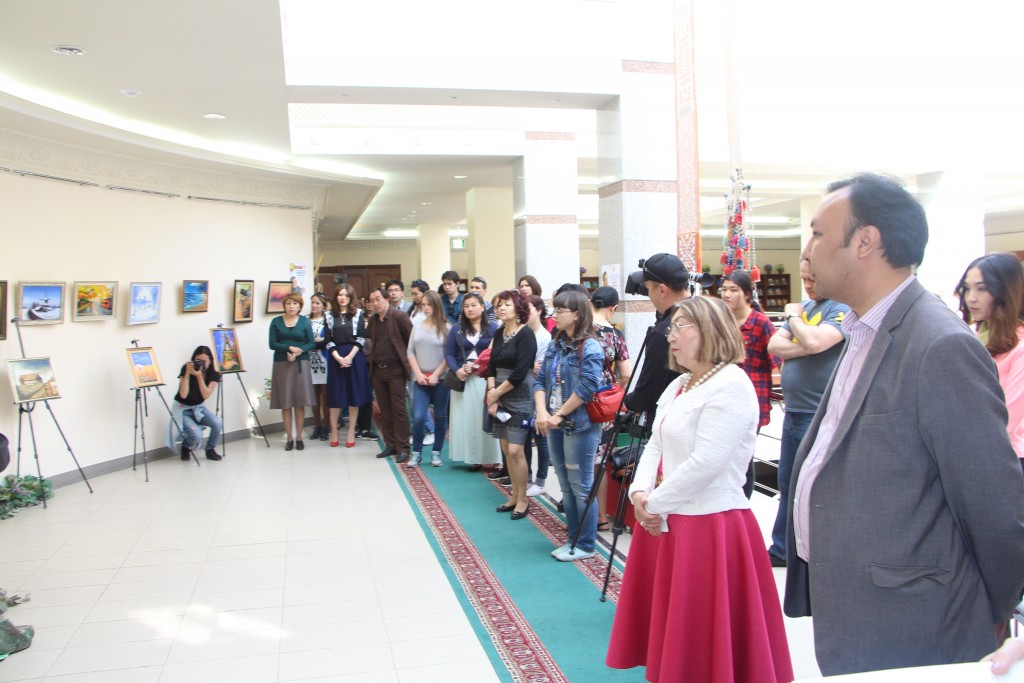 The main message of Kuyukov’s legacy, as he has said is to “stop the nuclear weapon race and madness in this world and keep reminding the world of the past consequences of the nuclear history. Perhaps not in five, not in 20 years, certainly not in my lifetime, but some day mankind will realise that it was the biggest mistake of all time. My goal is to do the best I can to at least start this dialogue.” 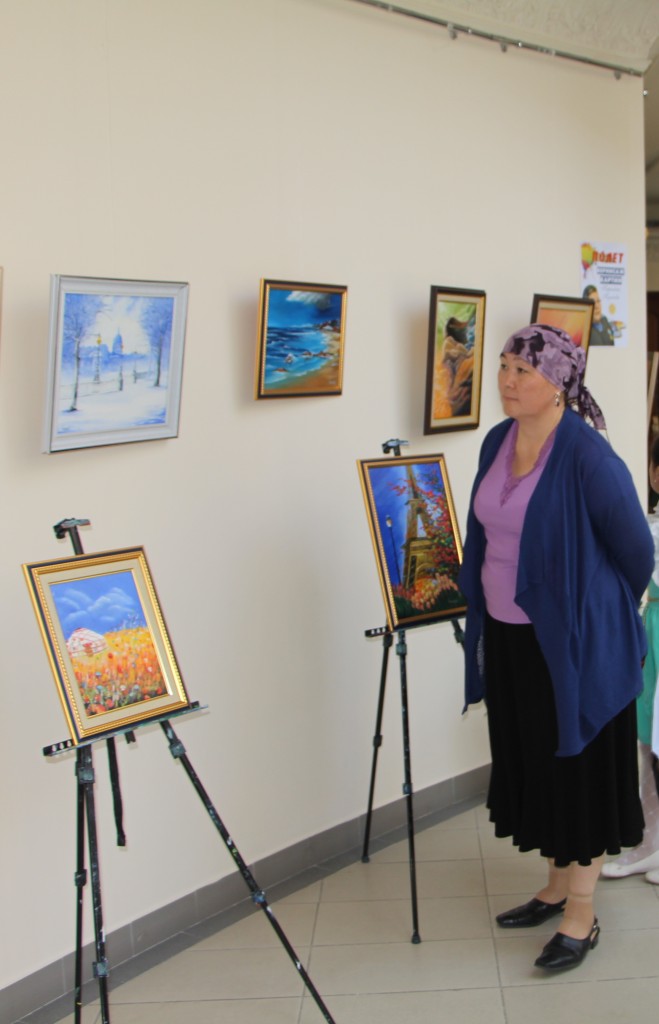 As part of his strong message the artist continues painting despite his state of health. “When painting for hours my neck and my back hurt. It is becoming harder each day. But I will continue doing it for as long as I can,” he said.

Thus Kuyukov, with the help of the poetry reading fund Pero (Feather) in Astana, headed by Yelden Sarybay, has finally launched his first art exhibition that will last until May 31.

“As they say – my dream came true,” Kuyukov said in his opening remarks and thanked all the people who came to the opening and those who helped him organise the exhibition.

“The centre of attention of my exhibition is and always will be the fight against nuclear weapons that marred the land of Kazakhstan,” he added. “It is no secret that too many people suffered from the nuclear tests that were conducted in Kazakhstan. All those diseases, tragedies, graves and pain that I witnessed in my life give me even more strength and inspiration to continue my works towards the nuclear weapon free legacy.”

Kuyukov emphasised the importance of the imminent threat nuclear weapons present today and urged people to sign The ATOM Project online petition (www.theatomproject.org) to voice the need to stop the nuclear madness.

“In all the years The ATOM Project has existed, together with Karipbek, we have travelled around the world and, I have seen the sincere support of the people in Austria, Japan, the United States and many other countries. I have seen that they are willing to help and to understand and support this initiative,” said Roman Vassilenko, deputy minister of foreign affairs of Kazakhstan who attended the event.

He called Kuyukov “a living proof of the continuity of the struggle of the Kazakh people and Kazakh President Nursultan Nazarbayev” against nuclear weapons, as Kuyukov was engaged in the famous Nevada-Semey international anti-nuclear movement in the 1980s and early 1990s. And he called the artist “a uniquely strong willed person whose love of life gives all the people who know him a major boost, a desire to do good for others and a better understanding of true priorities in their own lives.” 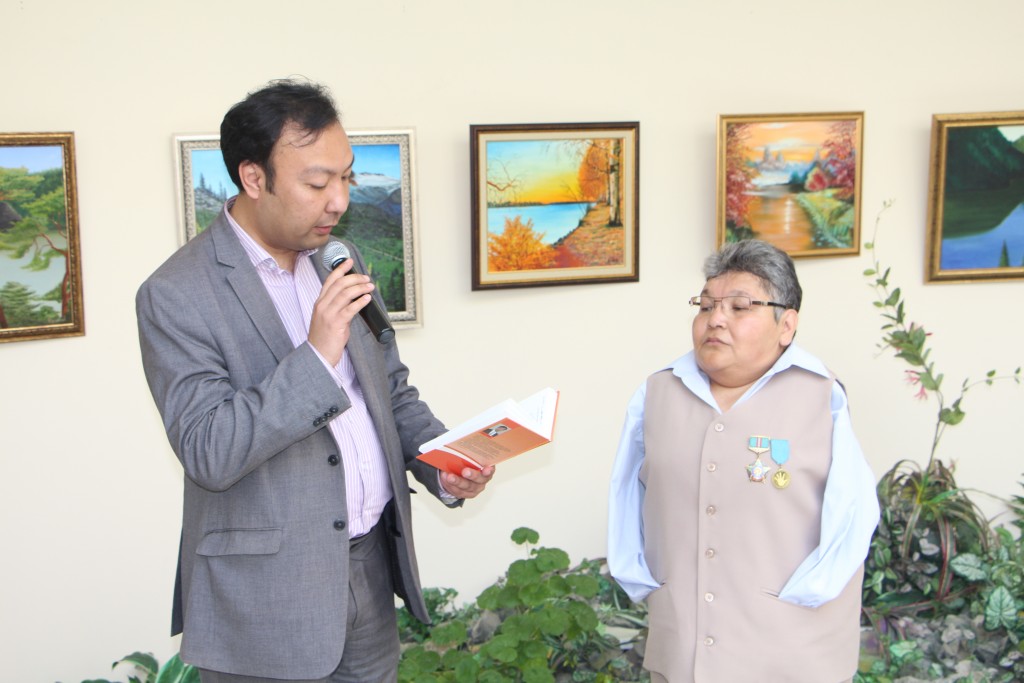