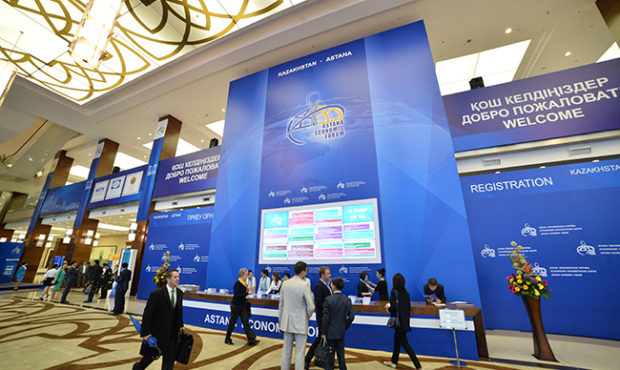 This year’s theme, “New Economic Reality: the Diversification, Innovations and the Knowledge Economy,” has assembled internationally-renowned names under the Independence Palace roof. The guests were engaged in heated debates and discussions throughout numerous panel sessions.

One of the headline makers, however, was the line by International Monetary Fund (IMF) Managing Director Christine Lagarde, who stated oil prices “will not go back to $100 a barrel” in an interview with local television broadcaster Khabar a day prior to the official start of the forum.

“Kazakhstan for over a decade showed a good pace of economic development. If one looks at the average rate of growth in recent years, it was about 7 percent. In many ways, these indicators have been provided by high commodity prices, especially for oil. It was very wise to set aside part of the funds in the sovereign fund, then to use it as a buffer in case of extreme situations. … We think that despite the negative atmosphere with such programmes as The 100 Concrete Steps and the Strategy 2050 with key structural reforms proposed by the President of Kazakhstan, the country is moving in the right direction,” she said, as quoted by the network.

The recently-established Eurasian Economic Union (EAEU), which Kazakhstan is chairing this year, was also in the spotlight at the forum. Experts sought ways to use EAEU’s mechanism to aid the tumbling economy.

“The expectations for the Eurasian Economic Union were much better when the oil prices were high,” said World Bank Chief Economist for Europe and Central Asia Hans Timmer. “In the long run, for me it still makes a lot of sense to have the regional cooperation and to have a free trade area where it would be possible to integrate. From the prospective of Kazakhstan, at the moment it’s not the only focus. Kazakhstan has this enormous opportunity to trade not only with Russia but to start trading with China also and to start trading with Western Europe. I think the most important reform is making it easier for new and small enterprises to enter the market.”

The Nobel laureates also met the first day with Kazakh students at Nazarbayev University. They highlighted the reforms being executed in Kazakhstan, emphasised the need for sustainable growth and praised the AEF for creating a platform for international dialogue on issues relating to the economy and even nuclear non-proliferation.

“The Astana Economic Forum is the main one for Central Asia for sure; it is also important outside this major area for the entire world economic order. And your President is taking many good economic initiatives like relating to nuclear disarmament, which I think is extremely important,” said Nobel laureate in economics Christopher Pissarides.

Kazakh President Nursultan Nazarbayev certainly couldn’t afford to miss the first day of the international dialogue and joined his former counterparts in the talks.

“The global economy shows volatility,” he said. “We do not feel or hear certain expert opinions like where we are headed or what is awaiting us. Obviously, all this impacts Kazakhstan. There are certain difficulties in processes in Europe, Russia and China, so we do have things that we need to discuss,” he said in a meeting with members of the International Advisory Council including former prime ministers of Austria, Israel and Italy, and a former president of Poland.

The Kazakh President added in spite of the challenges, Kazakhstan continues implementing its reforms which have found support among foreign politicians and former heads of state.