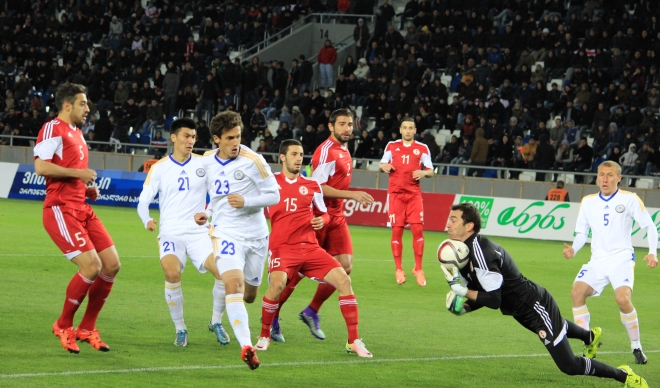 A bit of intrigue ahead of the match was added by the fact that Georgia’s team is now managed by Slovak coach Vladimir Weiss, who for the three last years led one of Kazakh Premier League’s two top clubs, FC Kairat Almaty and is, therefore, quite familiar with the potential of many Kazakh players.

The first half of the match turned out eventful. The hosts managed to create a number of early threats in front of Kazakhstan’s goal, which were defended by David Loria. The 34-year old veteran goalkeeper, who now plays for FC Irtysh Pavlodar, wore the national team jersey following a five-year break. Georgian players Ananidze and Okriashvili twice seriously threatened Loria’s goal in the first half, but in both episodes the goaltender proved his quality.

However, it was the visitors who scored first. Serikzhan Muzhikov’s quick run into the penalty area from the right flank resulted in a thoughtful cross to Azat Nurgaliyev, who was left open in the middle and made full use of his chance, making the score 1:0.

It took only a couple of minutes for the Georgians to equalise through Okriashvili’s quality strike from just outside the penalty box. This time, Loria did not react in time.

During the half-time break, Loria was substituted by Vladimir Plotnikov for whom it was his debut in the national team. The game proved difficult for him, as the hosts intensified their pressure further. However, the Kairat goalkeeper, 29, played well to confirm his quality. There was a moment when one of the Georgian strikers fell to the ground following a tough challenge from team Kazakhstan’s central defenders. The Maltese referee’s whistle kept silent. At the end of the match the pressure from the hosts culminated in a number of threats but the Kazakh defence did not allow errors. As a result, the match ended in a draw, 1:1. 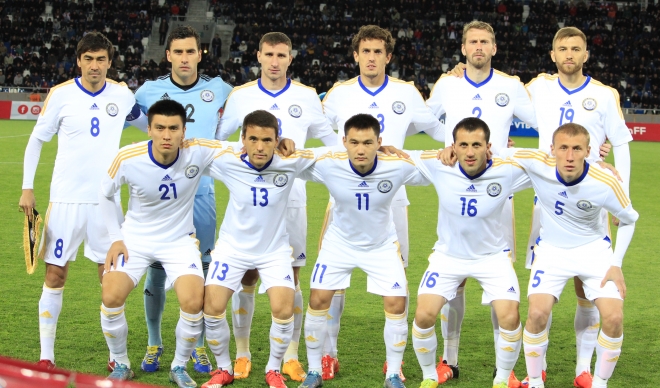 “When compared to the previous match [with Azerbaijan], the Georgian team’s players are stronger. Almost all players play abroad, many in the Russian Premier League, and many more in Europe. Therefore, the match was interesting for us. I think we showed good football today. We controlled the ball [for long periods] and we had some dangerous strikes too. In general, we came to Tbilisi in search of a positive result and gladly we have achieved,” said the visitors’ captain Samat Smakov following the referee’s final whistle.

For the veteran defender, the match in Tbilisi became the 73th for the national team, which was a new record for the number of matches played for team Kazakhstan.

“First of all, I want to thank my team for a good game. Our goal was to earn a positive outcome. I am grateful to the guys who have secured positive results in the matches with Azerbaijan and Georgia,” Kazakhstan’s interim head coach Talgat Baysufinov said at the post-match press conference.

Team Kazakhstan continues its preparations for a qualifying tournament for the FIFA World Cup, which will be held in 2018 in Russia. Kazakhstan got into Group E where it will play Poland, Armenia, Romania, Denmark and Montenegro.