By Altair Nurbekov in International on 5 April 2016 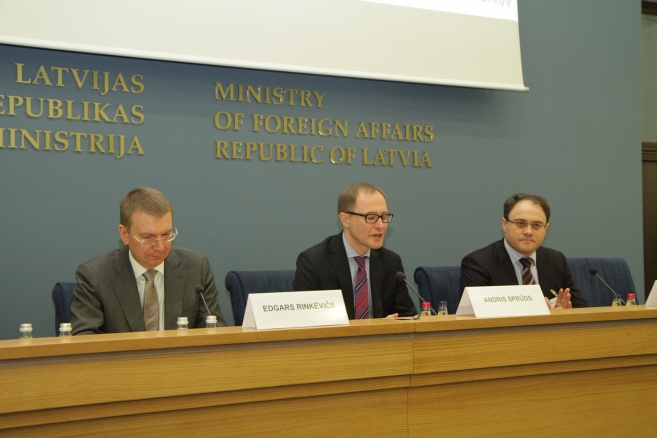 The conference, which brought together speakers from countries in both Europe and Central Asia, focused on the new European Union (EU) global strategy, that is currently under development, and the EU’s role in Central Asia it should espouse from its point of view and those of Central Asia and other countries.

LIIA Director Andris Spruds opened the event held at the historic building of the Latvian Ministry of Foreign Affairs. The country’s Minister of Foreign Affairs Edgars Rinkevics and Kazakh Deputy Foreign Minister Roman Vassilenko delivered keynote speeches, with EU Special Representative for Central Asia Peter Burian serving as one of the speakers during the event.

In his opening remarks, Rinkevics emphasised the EU global strategy was instrumental in developing a more coherent EU Common Foreign and Security Policy and strengthening the EU’s global role. In the context of recent EU security challenges, Europe needs to “pay greater attention to ensuring stability and development both in its Southern and Eastern neighbourhood and in Central Asia.”

He added Latvia remained committed to advancing initiatives aimed at “promoting cooperation between the EU and Central Asia in border security, education, the rule of law and environmental protection” which were launched during the Baltic nation’s presidency of the EU Council in the first half of 2015. From Latvia’s perspective, he said, the EU should consider joint cooperation with China under its One Belt, One Road programme, thereby supporting sustainable economic development in Central Asia.

“Our meeting today is very important in terms of getting better and thorough understanding of the expectations of the Central Asian states in relations with the European Union, including the conditions and modalities of cooperation at the regional and bilateral levels in the framework of the EU Strategy for Central Asia,” said Vassilenko.

He noted Kazakhstan has consistently supported fully implementing the strategy and since the beginning has pushed to further expand its scope. Vassilenko added the Kazakh proposals were taken into account in preparing the European Council’s conclusions which approved the revised strategy last year. 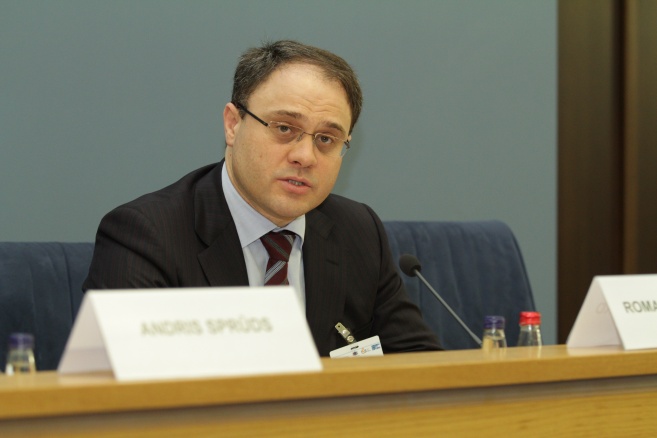 “Inter-regional cooperation with the European Union absolutely is one of the priorities of the foreign policy of the Central Asian countries; therefore, we want to ensure our cooperation stays mutually beneficial and fair,” he said.

Vassilenko noted Kazakh President Nursultan Nazarbayev proposed a number of initiatives aimed at transforming the world at the 70th anniversary session of the United Nations (UN) General Assembly including the so-called project of “Big Eurasia.”

“Big Eurasia, the integration project of the 21st century, is an especially important proposal. Given Kazakhstan’s chairmanship in the Eurasian Economic Union in 2016, it is possible to consider the possibility of starting work on building constructive cooperation between the European Union and the Eurasian Economic Union and to search for the optimal areas for development of mutually beneficial cooperation,” Vassilenko said.

The integration potential of the EAEU and the implementation of the “Silk Road Economic Belt” project, together with China, demonstrate Kazakhstan’s position as a key business partner and a hub in Eurasia, he added.

“Today, Eurasia plays an important geo-economic and geopolitical role in world politics. The interests of all the global players – including the EU, the U.S., Russia, China, India, Iran, Turkey and others – meet here. We firmly believe geopolitical games, mutual economic sanctions and other out-dated elements of the Cold War era should belong to the past. Building a peaceful, stable, prosperous and economically strong Eurasia will have a significant positive effect on global growth and will be beneficial for everyone,” the Kazakh diplomat declared.

According to the speaker, the revival of the transit-transport routes through Central Asia, just like during the Silk Road era, will not only halve the time of transportation of goods between China and Europe, as well as to the ports of the Persian Gulf, but will also give additional impetus to the development of markets, private businesses and the civil society.

“Our common goal should be to ensure that Central Asia is transformed from being landlocked into becoming land-linked through the large-scale development of the national infrastructure of land trade routes,” Vassilenko stated. “For instance, establishing a logistics base in Latvia for trade with Europe seems to be a promising initiative. Access to the EU’s logistics centres will enable Kazakhstan to efficiently ship their cargo and possibly the cargo of other CIS (Commonwealth of Independent States) countries, as well as China, through Latvian ports to European markets and vice versa.”

In his turn, Burian called for Afghanistan also to be “engaged in the EU-Central Asia cooperation so that the regional security issues could be dealt with more successfully.”

Diplomats and scholars from Kazakhstan, Kyrgyzstan, Tajikistan and Uzbekistan, as well as from China, the EU, Russia and the United States, participated in the conference.

According to the Kazakh Foreign Ministry press service, in a separate meeting with Burian, Vassilenko discussed practical steps to further develop cooperation between Kazakhstan and the EU in light of the March 30 negotiations in Brussels between Nazarbayev and European Commission President Jean-Claude Juncker. The sides outlined additional action on bilateral cooperation in the framework of the Kazakhstan-EU Enhanced Partnership and Cooperation Agreement (EPCA), facilitation of the visa regime for Kazakh citizens and organisational aspects of the planned joint activities and scheduled visits to Kazakhstan this year by high-level European delegations.

Earlier in Brussels, President Nazarbayev announced the completion of internal ratification procedures of EPCA by Kazakhstan, which, given its earlier approval by the European Commission, means that the agreement will be provisionally implemented as of May 1, 2016. According to officials, provisional implementation relates to those parts of the agreement, for example, trade, which fall under the purview of the European Commission. For the agreement to fully enter into force, it will need to be ratified by all 28 national parliaments of EU member states as well as by the European Parliament.

As a result of the talks, the sides agreed to hold meetings this year of the Kazakh-Latvian intergovernmental commission, business council and working group on transport and intensify contacts between relevant ministries and agencies, as well as business circles of the two countries.

The Kazakh official also held a meeting with Latvia’s Ministry of Transport State Secretary Kaspars Ozolins, who co-chairs the Kazakh-Latvian working group on transport. The sides noted good prospects of transport and logistics cooperation and agreed to intensify work in this direction.