Patrick Twumasi: Sometimes You Have to Overcome Many Difficulties to Get Where You Want

By Kamila Zhumabayeva in Sports on 25 April 2016

ASTANA – Well-known among the capital’s fans, 21-year-old Ghanaian striker Patrick Twumasi, who plays for the Kazakh Premier League club FC Astana, has more than 10 matches and scored goals behind him. He is persistent, determined and positive and has supportive family and colleagues, but stresses the need for good fan support that Kazakh football lacks. 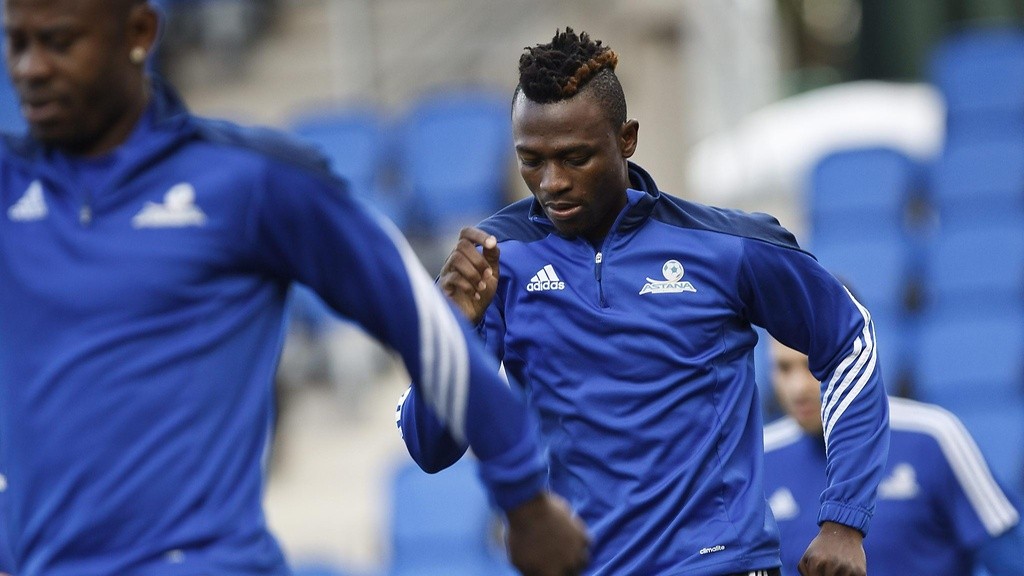 “Coming to Astana to play football as a foreigner is a good experience and great exposure for me. I feel great about coming all the way from Africa to do this job. Everything is okay so far,” said Twumasi in an interview for this story.

The player joined FC Astana in July 2013 on loan from the Latvian Higher League Club Spartaks Jūrmala, where he returned after scoring six goals in 11 matches, reported ghanasoccernet.com. A year later, Twumasi rejoined FC Astana for the rest of the season. Scoring 10 goals in 11 matches made him the club’s top scorer and helped Astana win the league, according to the website.

“Sometimes you face a lot of difficulties, but you have to overcome them to get where you want. It all depends on you as a player, a person and how determined you are to work. Give all your best, so that you are confident about your future and your abilities,” he said. “Work is a must; without it you cannot gain anything. Try to focus on your dreams, too, and do everything in your power both for yourself and your family.”

Twumasi’s performance drew the attention of other European clubs in late 2014. Wishing to participate in the UEFA Champions League and help Astana retain the league title, however, he decided to stay in Kazakhstan and has been a member of FC Astana since January 2015.

“It’s not that I decided to leave my country; you don’t have to stay in one place. Kazakhstan is not my first destination; I travelled to many European countries before and gained experience there as well,” he said. “I decided to come to your country to see what football and culture is like here and saw many similarities, for example, good and kind people to live with. I was happy about it.”

Twumasi believes his career as a football player in Kazakhstan is developing well. He stressed the need to work hard as there is still a lot ahead of him to accomplish, but is confident things will ultimately be successful.

“Kazakh football players are confident and know what they want to become at the end of their careers. They are friendly, kind and faithful and people you can trust. Working with such players gives me more motivation. We talk to each other and they help me in difficult times,” he explained.

“Sometimes you find it difficult to cope with the climate conditions here when the weather changes every day, but your people here seem to adapt to it easily. Food and language are also challenging at times, but I do understand some phrases and everything feels easier when it happens,” he said.

The football player has a wife and two children who were staying in Kazakhstan with him, but because of the weather Twumasi decided they should take a break and return at a later time.

“A wife would want her husband to be successful and must support him in happiness and distress. My family supports me with prayers, motivation and encouragement. They make me feel like I can do anything and they are my everything,” he said.

The striker said he would stay to continue playing football in Kazakhstan.

“Why not; nobody knows what will happen tomorrow, so I live everything for God to decide,” he said.

When playing in the Kazakh championship, Twumasi noted the team does not see many fans and supporters.

“They must come to support players so that we can feel good ambience from great people and fans which also motivates players to do some things better, but we can’t do it without them,” he said. “That’s why players need fans to attend the country’s championships and then everything will be prosperous, not only for Astana alone but the whole of Kazakhstan.”

“I want to say a big thanks to everyone for their support and kindness,” he said.