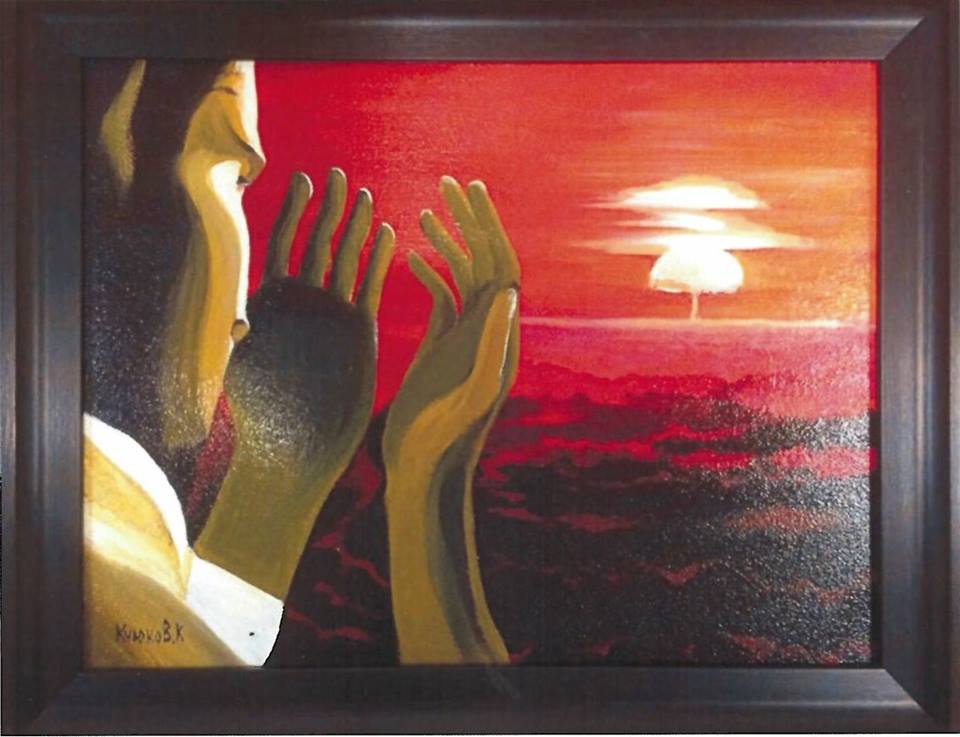 Kuyukov was born without arms as a result of his parents’ exposure to Soviet nuclear weapons testing near the village of Egindybulak in Karaganda Oblast, Central-Eastern Kazakhstan. He has overcome that challenge to become a renowned artist who paints with his teeth and feet and a globally recognised non-proliferation activist. He is also the Hon. Ambassador of The ATOM Project, an international initiative that has gathered to date more than 250,000 signatures to bring the Comprehensive Nuclear Test Ban Treaty into force and to eliminate nuclear arsenals.

The painting, “Explosion,” was created in November 2015. It features primarily red colours and shows a man with his hands up looking at a giant mushroom cloud.

“In that painting I wanted to show a man facing fear during the explosion. My parents were witnesses of those awful tests. My father used to be a driver and used to drive through the test site. He saw everything with his own eyes. This drawing shows from one side a scared man hiding from the radiation and from the other side he is praying for the explosions to stop,” said Kuyukov. 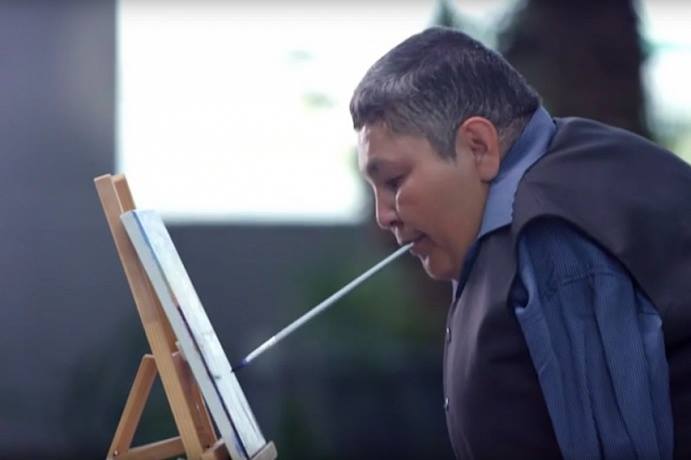 “I am very honoured that my painting was chosen by the President to be presented to Barack Obama. I think it is an honour not only for me. Each of us, Kazakhstan’s citizens, thinks about the nuclear test ban. The (Kazakh) President’s decree on closing down the Semipalatinsk test site 25 years ago is our common victory, our merit. We are an example for many countries,” said Kuyukov.

“I am very hopeful that this painting will find its worthy place in the White House collection. I hope it will serve as a powerful reminder to the current and future U.S. Presidents of the United States’ great responsibility to lead the way in ensuring the entry into force of the Comprehensive Nuclear Test Ban Treaty (CTBT).  Given the events in North Korea and the growing threat of nuclear terrorism, we have no time to lose.”

The fourth Nuclear Security Summit was held in Washington, D.C. from March 31-April 1 and attracted many of the world’s nuclear weapons state leaders, activists and others interested in nuclear security. At the summit, President Nazarbayev met with approximately 15 other heads of state and governments and was involved in discussions concerning the ways to enhance security of nuclear materials worldwide, as well as the enforcement of non-proliferation regime regulations. The latter includes the Comprehensive Nuclear Test Ban Treaty that is yet to entry into force pending signing and ratification by eight key states, including U.S., China, India, Pakistan, Israel, Egypt, Iran, and North Korea.

Nazarbayev had given Obama a Kazakh tumar (a traditional Kazakh leather amulet) during the 2012 Nuclear Security Summit in Seoul, according to Kazakh Presidential Press Secretary Dauren Abayev.