More than 3,000 Cyclists Celebrate Start of Cycling Season in Almaty

By Kamila Zhumabayeva in Sports on 16 April 2016

ASTANA – A massive bicycle race dedicated to the opening of the 2016 cycling season took place April 10 in Almaty. More than 3,000 city residents, guests, professional athletes and cycling lovers participated in the annual event. 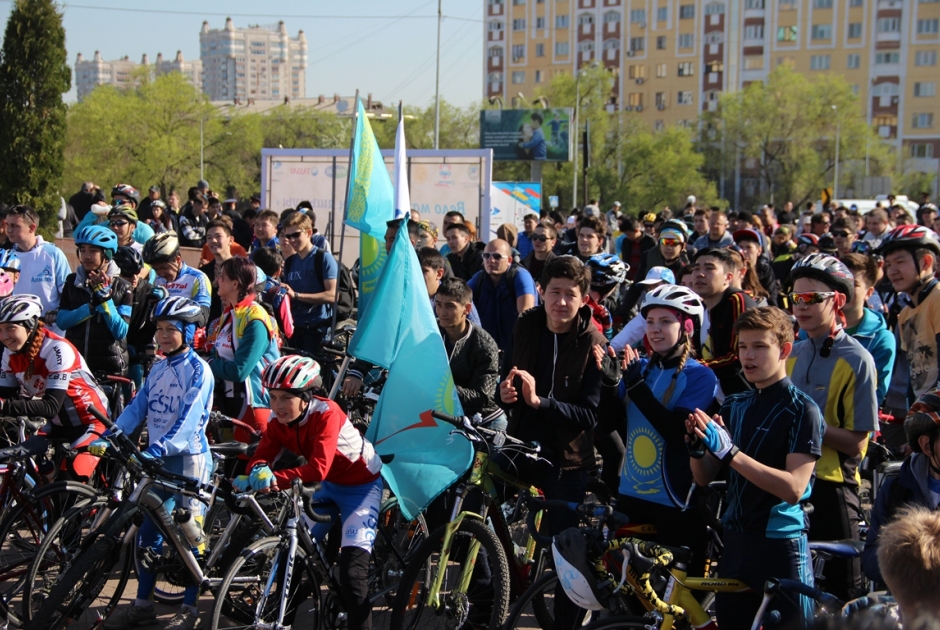 The race started at the intersection of Al-Farabi and Tattimbet streets. Cyclers had to pass through an overlapped Al-Farabi Street and finish at the First President’s Park, reported Kapital.kz.

The organisation of cycling events is visibly growing each year; 13 were held in Almaty in 2015. Planners note about 300 people gathered at the city’s first cycling march in 2009 and the number steadily increased the following years reaching a record number of 6,000, according to the news website.

An organised, safe start and a similar finish awaited participants this year. Security service and an ambulance accompanied the column. Cyclists occasionally had problems with equipment which were resolved on the spot at roadside, said Kapital.kz.

The front section of the park entrance turned into a festive area on race day and Almaty Akim (Mayor) Bauyrzhan Baibek greeted the participants. He congratulated citizens on the beginning of the cycling season, recommended everyone travel around the city by bicycle more often and wished for great spring days.

When the many cyclists gathered by the stage, Kazakhstan’s well-known voyager and biker Dmitry Petrukhin and Miss Kazakhstan 2014 and Miss Universe 2015 medallist Regina Vandisheva presented prizes to the winners in various categories such as most grown-up cyclist, most creative cyclist and youngest cyclist, reported Kapital.kz.

A lottery was then held using the numbers participants were given at the start and end of the race. One of the amateur cyclists riding for the first time received a new bicycle from the mayor. The celebration ended with a concert.

Six bicycle races will be held in the megapolis this year as part of Sporttyk Almaty (Kazakh for Sportive Almaty), a programme to develop mass sports announced by the city’s physical education and culture management.