By Aiman Turebekova in International on 26 April 2016 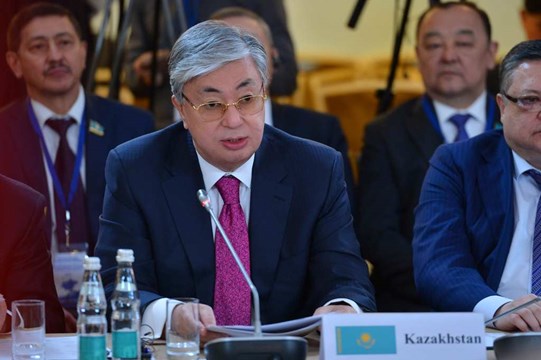 “Four officially recognised nuclear powers and a number of unofficial nuclear states are located in Eurasia, a place most prone to violent conflicts inflicting 200,000 human casualties every year. The bloodiest wars in Syria, Iraq and Afghanistan, as well as millions of refugees fleeing these countries have been affecting the whole continent. Situated in the heart of Eurasia, Kazakhstan has been deeply concerned about these developments,” noted Tokayev, focusing on the content of Kazakh President Nursultan Nazarbayev’s Manifest “The World. The 21st Century,” which is presented as a roadmap for ridding the world of wars.

According to the press office of the Kazakh Senate, in his remarks the Chairman of the Senate emphasised that among the key issues of our time are a crisis of trust between states, disregard for international law, an aspiration to dominate in global affairs, disrespect for the history and culture of other people.

“The fight for peace is a political and moral duty of every state regardless of its size and power. World military expenditures have reached almost $2 trillion. This figure proves that at governments’ insistence, some parliaments pass budgets where military expenditures prevail over development allocations,” Tokayev added, bringing up the subject that the signing of the Kazakh Presidential decree on closing down the Semipalatinsk nuclear test site25 years ago was the first and the last case in nuclear disarmament history.

“Members of parliaments should clearly say no to nuclear weapons. We can demand complete disarmament from the world powers, advocate for the implementation of the Treaty on the Non-Proliferation of Nuclear Weapons and the early entry into force of the Comprehensive Nuclear-Test-Ban Treaty,” Tokayev highlighted.

He also stated that the Eurasian states should support the central role of the United Nations in global affairs as well as oppose any restrictive measures and military actions violating the UN Charter. Tokayev also added that it is essential to promote economic interaction and trade to benefit the people, emphasising the key role of China’s Silk Road Economic Belt as an important strategy.

“The President of Kazakhstan put forward an idea about Great Eurasia that would embrace big integration initiatives on the continent. For its part, Kazakhstan has launched huge projects to build motor and railways, modernise logistics infrastructure as part of the Western Europe – Western China route and the Nurly Zhol Programme (The Bright Path) to establish transport corridors across Eurasia,” he said.

Tokayev also informed his counterparts about the conference Religions against Terrorism that will bring together parliamentarians and representatives of religious leaders to Astana on May 31 this year.

Furthermore, on the sidelines of the forum, Tokayev met with Iranian Parliament Speaker Ali Larijani. The parties noted the particular importance of the recent official visit of President Nazarbayev to Iran, during which major agreements in trade and business were reached. They noted that Kazakh-Iranian relations, which have always developed in a spirit of friendship and mutual support, today are experiencing a new phase of growth.

The speakers also discussed regional security problems associated with intensification of the activities of terrorist organisations. They emphasised a necessity of joint efforts to fight against extremism.