By Malika Orazgaliyeva in International on 13 April 2016

ASTANA – Kazakh President Nursultan Nazarbayev’s visit to Tehran on April 11-12 resulted in the signing of 66 bilateral agreements worth more than $2 billion. The deals are in the areas of metallurgy, mining, agriculture, transport and logistics, tourism, science and education, as well as medicine. 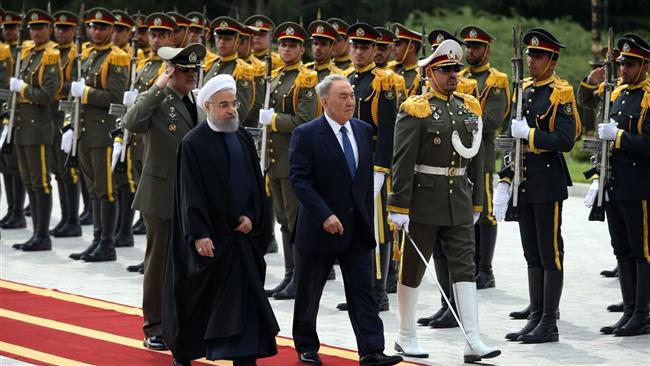 During a joint press conference after the talks, Nazarbayev and Rouhani noted the importance of strengthening collaboration in transport and logistics, as well as in environmental protection, tourism development and Caspian Sea navigation.

They also indicated they discussed increasing cooperation in agriculture, science, technology and culture as well as simplifying the process for issuing visas to business people.

In addition, they noted the need to fight against extremism and terrorism and ensure stability in Afghanistan, Iraq, Syria and Yemen based on political decisions.

Nazarbayev congratulated Rouhani and all the Iranian people on achieving success in resolving the nuclear issue and the lifting of sanctions, which opened great opportunities for the country.

Iran and Kazakhstan are connected in three logistical ways – railway, highway and the Caspian Sea – which positively influences further development of bilateral relations, said Nazarbayev. He added the Kazakhstan-Turkmenistan-Iran railway project was implemented thanks to Rouhani’s personal participation.

“The first container train from eastern China to Iran arrived in 12 days. Transport by sea would take twice as much time,” said Nazarbayev.

In turn, Rouhani noted that since gaining its independence Kazakhstan has been his country’s friendly neighbour. He added the need to ratify the new documents, which will open opportunities for free trade between the countries and formpreferred tariffs for Iran and the Eurasian Economic Union (EAEU).

In meeting with Khamenei, the sides exchanged views on the most pressing issues on the international agenda, noting the importance of the fight against terrorism and extremism.

Nazarbayev and Khamenei expressed satisfaction with developing Kazakh-Iranian relations in the fields of trade and investment, as well as creating new joint projects.

The two delegations signed the following documents during expanded negotiations: an agreement on the transfer of sentenced persons between the countries; cooperation agreement on plant protection and quarantine; memorandum of understanding between the Kazakh Ministry for Investment and Development and Iranian Organisation for Science and Technology on cooperation in new technologies; cooperation programme between the Kazakh Ministry for Investment and Development and Iranian Ministry for Industry, Mine and Trade in the field of industrialisation; extended long-term programme for collaboration with Iran on the Silk Road project; MoU between the National Bank of Kazakhstan and Central Bank of Iran; memorandum of cooperation between Kazakhstan Temir Zholy (KTZ – the national railway company) and the Iranian railway company; agreement and roadmap between KTZ Express and IRISL, the Iranian shipping company, andMoU between Baiterek, the Kazakh national managing holding company, and the National Development Fund of Iran.

The following day, Nazarbayev met with heads of major Iranian holdings and companies, including Ghadir Investments Group, Imidro, IRISL, Jahad-e-Sabz and Sunir Group, working in the fields of energy, agriculture, construction and the mining industry.

Nazarbayev noted there is mutual interest in strengthening cooperation in various areas and called on the Iranian companies to actively use the potential of the Kazakhstan-Turkmenistan-Iran railway.

The Kazakh-Iranian Business Council, organised by Baiterek, gathered more than 200 companies from the two countries, reported baiterek.gov.kz. According to business council co-chairman and Baiterek Chairman of the Board Kuandyk Bishimbayev, the nations’ leaders have played a major role in the active development of bilateral relations between the countries.

Export contracts to supply agricultural and engineering products to Iran and the joint implementation of projects in the chemical and petrochemical industry were among the agreements reached.

“We are pleased to note that the agreements signed today include the investment of Iranian companies in those sectors of Kazakhstan’s economy where Iranian companies have made great progress. The business council discussed the issue of air traffic. We transferred all the voiced questions to the government of Kazakhstan. The national carrier Air Astana has opened new flights between Kazakhstan and Iran. This will allow us to strengthen trade and economic cooperation,” Bishimbayev said.

“For us, Iran is a partner that allows us to get access to the Persian Gulf on the new international transport corridors. Iran is interested in Kazakhstan because our country provides access to Russia, China and Central Asia,” Bishimbayev added.

A large package of agreements was signed regarding import and export of agricultural products, according to the Baiterek press service. In particular, a number of Kazakh companies agreed to export meat and grain products.