By Kamila Zhumabayeva in People on 26 April 2016

ASTANA – Pulitzer Prize-winning American journalist and National Geographic Fellow travel writer Paul Salopek set a goal to walk the global trail of first humans who migrated out of Africa in the Stone Age. He is now in Kazakhstan to continue his 21,000-mile foot journey, the “Out of Eden Walk” that started in Ethiopia in 2013 and will end at the tip of South America seven years later. 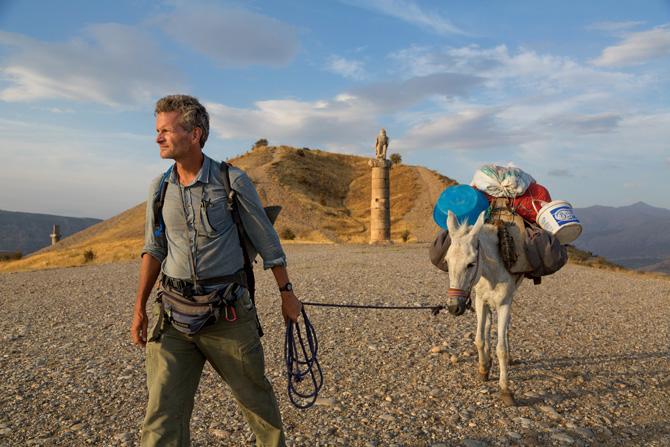 “I discovered before this project that walking is helpful for many things and one of them is thinking… The project has probably been evolving in my life long before I actually set out walking from Africa in 2013,” Salopek started his story while walking on the stage of Nazarbayev University.

Human species, he said, began to migrate and spread through the Middle East, to Europe, Asia Minor and Central Asia, along coastlines, the Caribbean coast, along beaches, to Siberia.

“They crossed what was back then a land bridge between the old world and the new world – now divided by a sea between Alaska and Siberia and then all the way down to the very tip of South America, Chile – probably one of the last corners, horizons in the original discovery of the earth by our ancestors,” he explained.

Salopek believes this journey is highly important in the history of human species, even more important than space travel because, as he explains, humans had technology and intellect to begin to “innovate their way across habitats, climates, desserts, mountain ranges, glaciers and bodies of water” when they left Africa.

“The revolution of the human mind happened, that allowed us to basically take possession of the planet, we became planetary species. That is why I call this journey a walk into becoming a human. We became the people we are today… This journey took about 2,500 generations. The ‘Out of Eden Walk’ is going to try to replicate this journey in a much shorter time span, seven to nine to ten years,” he shared. 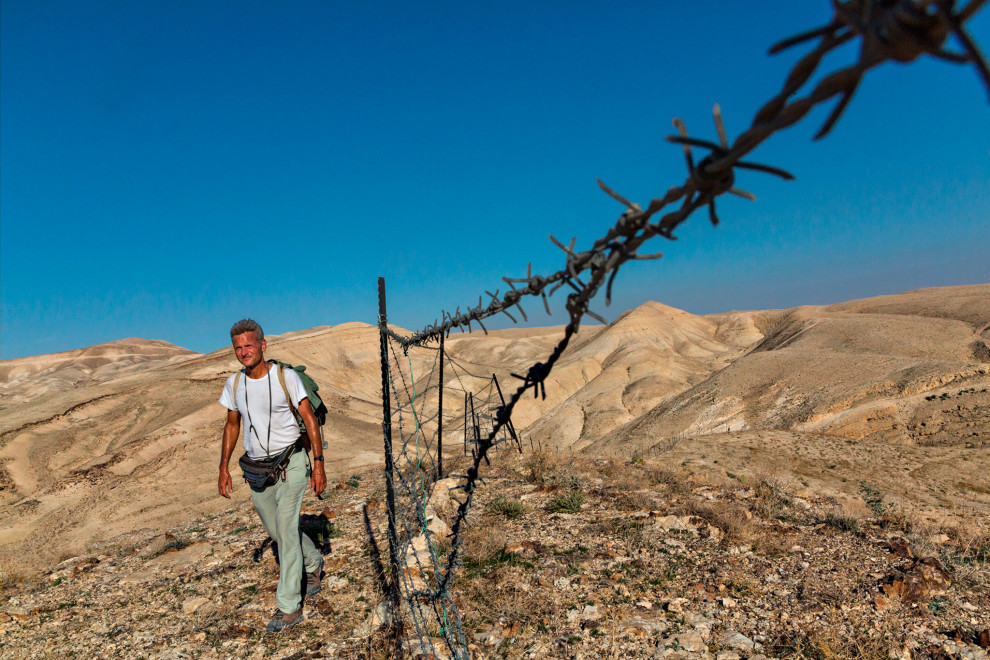 “When people say that what I am doing is crazy, I say no… I am doing what we are built to do, what evolution built this amazing body to do over the course of 200,000 years,” Salopek stressed.

He is combining the most ancient form of transportation with the highest technology that he can master along with the help of National Geographic, laptops, satellite phones and by interacting via social media when he is able to.

In his journalism career, Salopek worked as a foreign correspondent in Africa, the Middle East, Central Asia, Balkan Peninsula and Latin American countries often covering conflicts. He explained why he walks and not flies, takes a cab or public transport.

“What are all the stories that I am missing between myself, airplane, stories between A and B? I would argue that the stories nobody sees because we are flying to them are as important and sometimes more important than the story at the destination. That connectivity along with the act of slowing down immerses, submerges me into daily life,” the journalist said.

Along the route of his walk, he hopes it gives a deeper insight and more meaning in the stories he writes and shares.

“Climate change, economic upheaval, globalisation, mass migration, environment, culture, politics, war – I don’t just skim through, but live and inhabit the events and major headlines of the day with people who live them and who rarely get written about,” Salopek noted.

In the fall of 2012, these were the reasons of his decision to “set aside his conventional journalism career” to do the “biggest story that he could think of.”

Salopek uses GPS and GIS mapping technology and takes a city walk in every major city he walks into. He spends one to three days walking around the town and turns on a GPS device, which locates him to a satellite after about every two metres.

“I stop, see somebody, I say ‘hello, can I take your picture, what’s your life like.’ That photograph is GPS connected to the satellite and GEO located. So I’m drawing GPS maps of every city that I walk through,” he added.

The journalist listed some people he walked with and who are also the characters of the story.

“I’ve walked with African nomads, Saudi generals, Israeli poets, Turkish photographers, Georgian high school drop outs, ‘Mr Azerbaijan Sportsman of the Year 2012,’ which was a mistake because he walked me into the ground,” he said, causing a light cheer among the university’s auditorium. 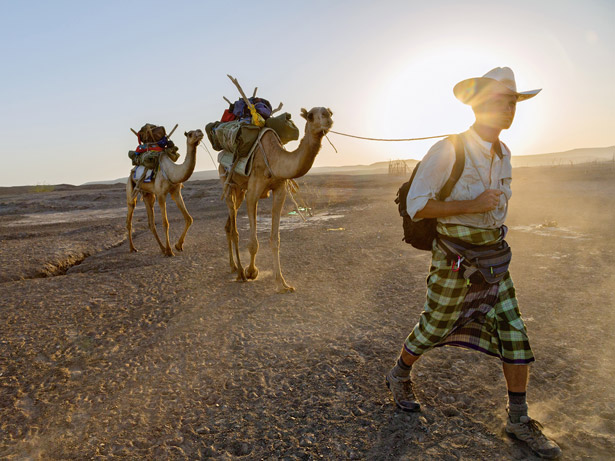 Salopek noted that he was born in and loves the desert and that a country like Kazakhstan opens up his heart. He explained how he finds his walking partners.

“There is no system… I have a network of journalist friends around the world and journalists are great hubs of information. Other 60 percent of the time it is random,” the traveller said.

“In a very empty and desolate landscape you have to plan, there is no walking out of Aktau and hoping for the best you know… Water is a bigger problem; I don’t know where I’m going to sleep every night, that is an honest truth. I might have a desired destination but I don’t know whether I’ll make it or no,” the speaker continued.

Salopek said he has to plan his journey for the sake of safety, but he cannot get upset if plans do not work because according to him, 90 percent of the time they do not.

“Slowing down allows me to move in a way that calms you down. You don’t get upset about small things, you get upset about big things. You are able to differentiate,” he noted.

The journalist also shared about what brought him to his journey.

“Accumulation of years of experience as a travelling writer… I had a great honour and privilege. I have been lucky to be allowed to witness history unfold during my life time by covering, sadly, conflict but also countries building themselves up and pulling themselves together,” Salopek says.

However, he always thought he was “doing it quickly, flying story to story” and that there had to be a better way to “globalise” storytelling in today’s globalised technological age and “put fast short micro headlines into a human context.”

“I thought what is the journey that ties us all together? And it was this journey for me anyway, the journey of our ancestors to basically become planetary species. So it is combination of emotional and intellectual reasons,” he concluded.