By Zhanna Shayakhmetova in International on 22 April 2016

ASTANA – More than 400 delegates from more than 50 countries and approximately 30 authoritative speakers gathered here for the 13th Eurasian Media Forum (EAMF) on April 21-22. Issues related to the worldwide economic crisis and its global consequences were discussed in panel sessions by prominent international politicians, economists, journalists and public and political figures, as well as representatives of media, political and expert associations. 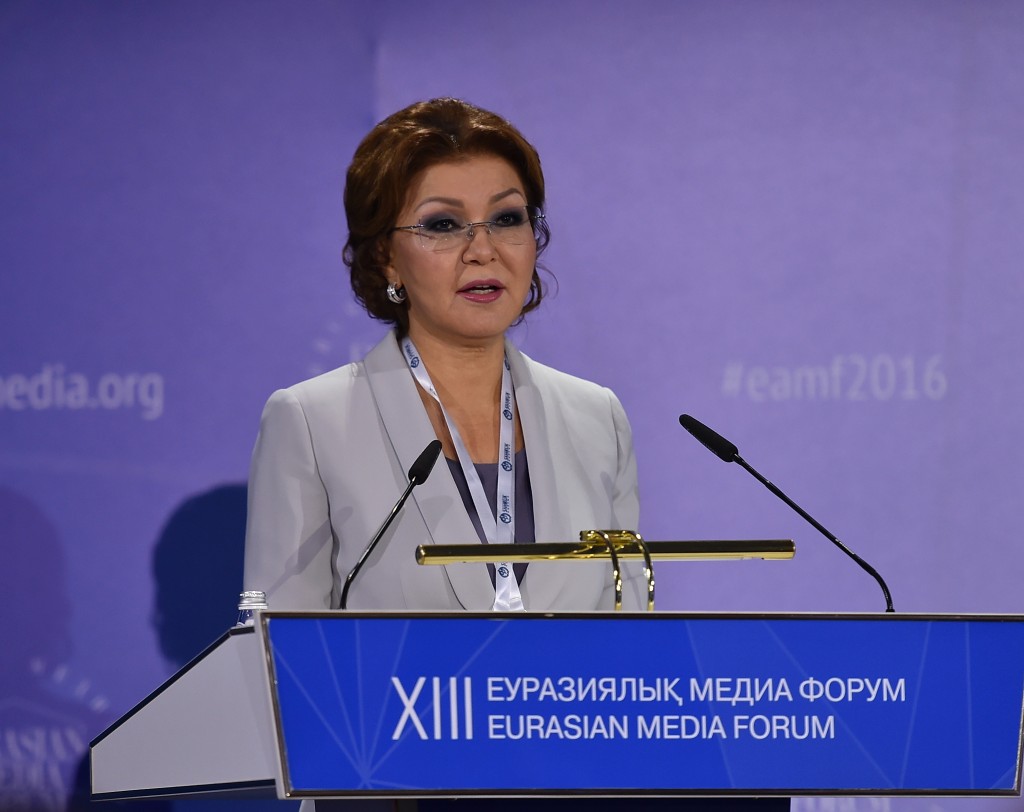 “I believe that the Eurasian Media Forum has become one of the leading platforms for dialogue. The most topical issues of the modern world are discussed, as are a new paradigm of development and the future,” she read in the speech.

Nazarbayev noted the Manifest “The World. The 21st Century”, which he presented during the Nuclear Security Summit in Washington at the end of March 2016, has an aim of eradicating the wars throughout the world. 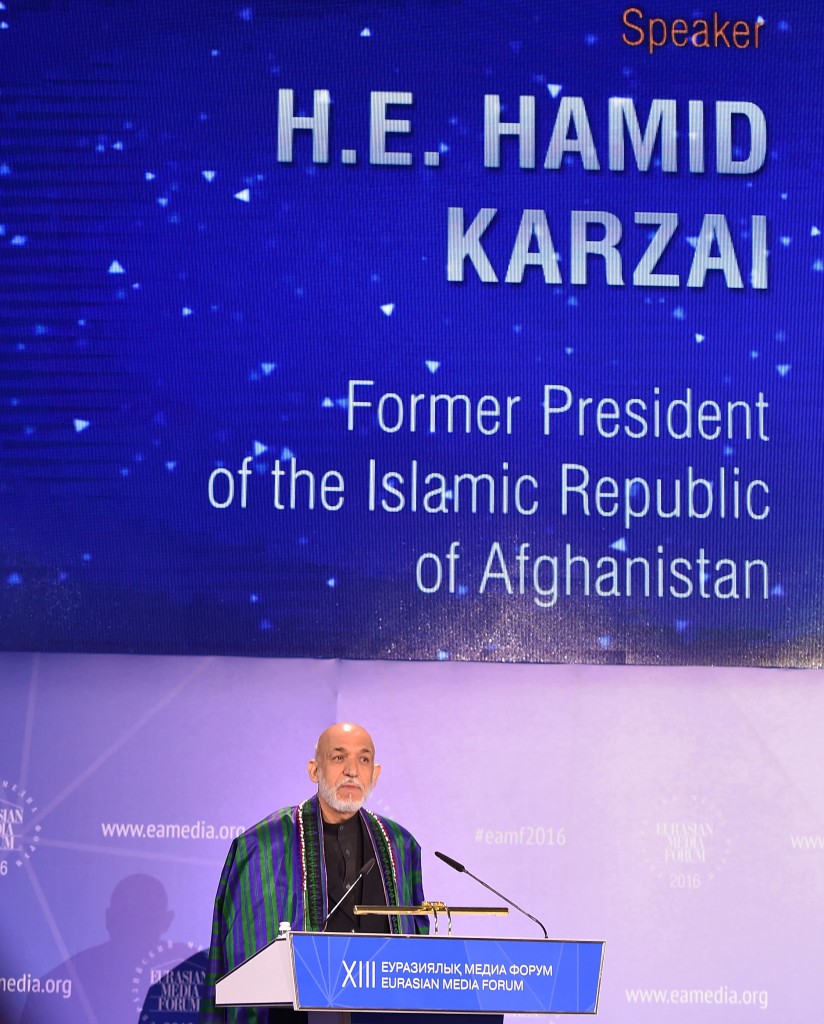 “Today, humanity is entering an era of unprecedented trial. What the new world and our common future will be depends on each of us… Thanks to the common will, this century must become the era of the triumph of constructive dialogue. The open discussion of world problems at the EAMF for finding a balanced solution will be an invaluable contribution to the peace movement,” she added.

In his welcome speech, former Afghanistan President Hamid Karzai praised Nazarbayev’s peacekeeping efforts and expressed hope that this forum would be thought provocative but constructive.

“Above all, I am happy to be in Kazakhstan once again. The country has a common culture with us. This is the country that has helped us for the last 13 years and made a huge contribution to the development of the country. President Nazarbayev has always been a friend of Afghanistan and a kind partner in the re-building of Afghanistan,” he said. 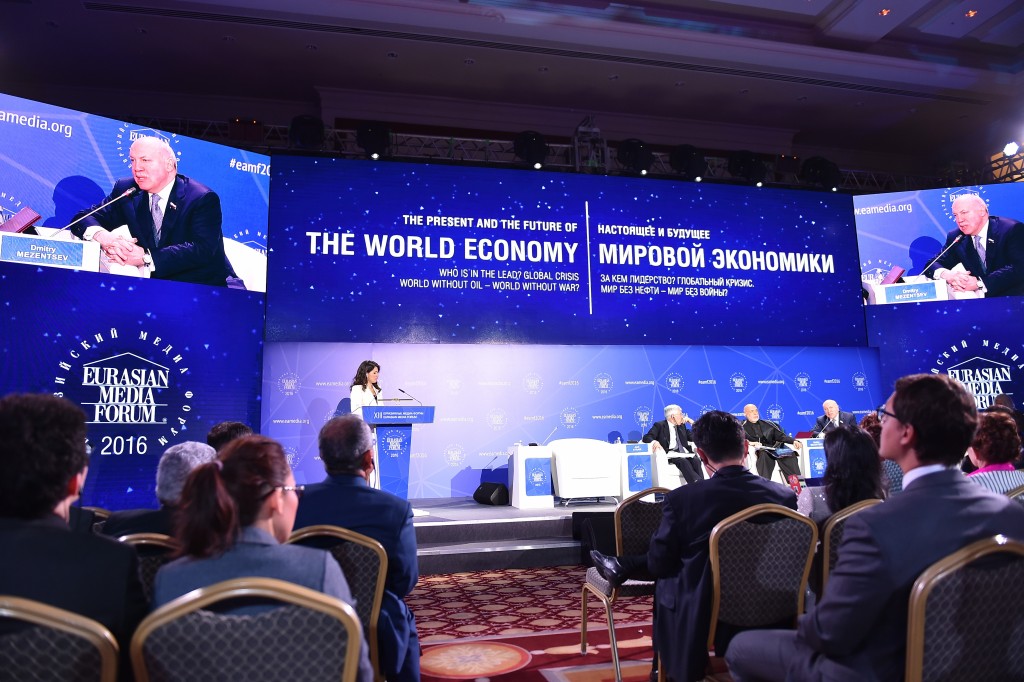 Karzai added Nazarbayev and the Kazakh people gave 1,000 scholarships to Afghan students to study in Kazakhstan. He also noted the significance of the President’s recent initiative on global nuclear disarmament and asked all to join in support of the manifest.

As she greeted the participants, Nazarbayeva noted the EAMF has a solid history and experience of mutually fruitful dialogue.

“Our city is preparing to hold the EXPO 2017 exhibition and the guests will have the opportunity to get acquainted with the impressive scale of the construction of the exhibition centre, which will become a new pearl of Astana… We are all very different and sometimes have opposing views, but nevertheless, almost every year we gather in the hospitable land of Kazakhstan. We learn how to hear and listen to each other,” she said.

Mezentsev said the EAMF forum has become a major event of not only regional but also global importance. He stressed a world without war is better than a world with conflict and violence.

“A man does not change even though high technologies can make the world perfect. The current agenda of the first session demonstrates that we should not forget how the level of oil prices changes. We unfortunately saw how difficult it was to hold negotiations in Doha. We see that 30 billion barrels of oil per day are not even a limit to OPEC. Today, production has significantly increased and if there is no agreement, if the economic, selfish interest dominates in a number of countries, it is necessary to understand why this is happening,” he said.

Mezentsev noted the unity of 100 nationalities living in Kazakhstan is a successful model of political and economic means which will be stable for decades.

Straw indicated Britain’s collapse in the steel industry is a significant problem and shared his vision on facing this reality.

“If there is a more strategically sensible approach by OPEC to see an increase in the oil price, that in turn, will rebalance the international economy and reduce the overall level of risk. And maybe therefore seeing the trend growth of the world economies improving which, in turn, would improve the commodity prices as well,” he said.

Kelimbetov said Kazakhstan currently has a good opportunity to move from the commodity-driven model to economic diversification.

“President Nazarbayev started this reform many years ago. In 2001, we created a sovereign fund, which we call the National Fund, and we already have $64 billion, which is kind of a reserve for the future generation. We follow many countries who joined for more flexible exchanges or an inflation-targeting regime following the Russian example… The most important thing is the reforms started by President Nazarbayev, we call them the Plan of the Nation – 100 Concrete Steps, which sets the reforms on how to improve the investment climate and how to improve the always-[available] opportunity to do business in Kazakhstan. Part of this is creating financial clusters in two years… New financial centres will be based here,” he added.