By Kamila Zhumabayeva in People on 22 April 2016 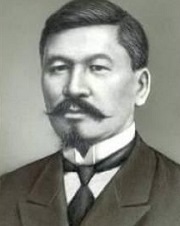 “Alikhan Bukeikhanov substantiated the need to revive the idea of national statehood and outlined ways and methods to achieve this goal by heading the Alash Kazakh national liberation movement. He was the leader and founder of Alash that aimed to establish the Kazakh independent state,” she said.

“Bukeikhanov’s anniversary is a celebration of literature, language arts and publicism. There is a saying that the works of scholars and great people never die; the name of our great scientist and social activist will forever remain in the memory of the nation,” Almaty Akim (Mayor) Bauyrzhan Baibek said at the event, reported Kazinform.

Senate Deputy and Writer’s Union of Kazakhstan Chairman Nurlan Orazalin, academician and National Academy of Science President Murat Zhurinov, KazNU Rector Galimkair Mutanov, science, education and culture activists and the general public participated in the conference. A documentary about the Alash movement was screened, a book exhibition about Bukeikhanov’s life and work was conducted and a new issue of prominent publicist Mukhamedzhan Seralin’s magazine, “Aikap,” was presented.

Born in the Semipalatinsk province of the Russian Empire in March 1866, Bukeikhanov was the great grandson of Barak Sultan, the former khan of Bukei Horde, an autonomous khanate of Kazakhs that existed from 1801-1845. He graduated from Omsk Technical Institute and Saint Petersburg Forestry Institute in 1894, faculty of economics.

He was also a contributor to “Sibirskie Voprosy” and “Aikap,” the Kazakh socio-economic and literature magazine published in Troitsk (a town in Chelyabinsk region) from 1911-1915. Bukeikhanov founded “Qazaq,” a Kazakh language newspaper, with prominent Kazakh poets and writers Akhmet Baitursinuly (editor in chief) and Mirzhakyp Dulatuly.

He was the first biographer of Abai Kunanbayev and his obituary of the Kazakh poet, composer and philosopher was printed in “Semipalatinsky Listok” in 1905. Four years later, he published a collection of Kunanbayev’s works.

“Kirgizy,” the 1910 book about the forms of national movement in modern states, was his major political publication.

From 1917-1920, Bukeikhanov served as the Prime Minister of the Alash Autonomy (a Kazakh state that existed during that time period). In the national political scene, Bukeikhanov sided with “westernisers,” a group of 19th century intellectuals promoting the idea of Western culture into the Kazakh steppe.

Bukeikhanov married Yelena Sevostyanova, the daughter of old populist Yakov Sevostyanov, whom he knew from his work at “Stepnoi Krai” newspaper. They had a daughter Yelizaveta (Zeinep) Sadvokasova and son Sergei (Oktai) Bukeikhanov whose descendants reside in Moscow, according to Industrialnaya Karaganda regional newspaper.