ASTANA – Representatives of the six parties running for seats in Kazakhstan’s lower chamber of Parliament took part in an electoral debate March 16 shown on one of the country’s national TV channels. 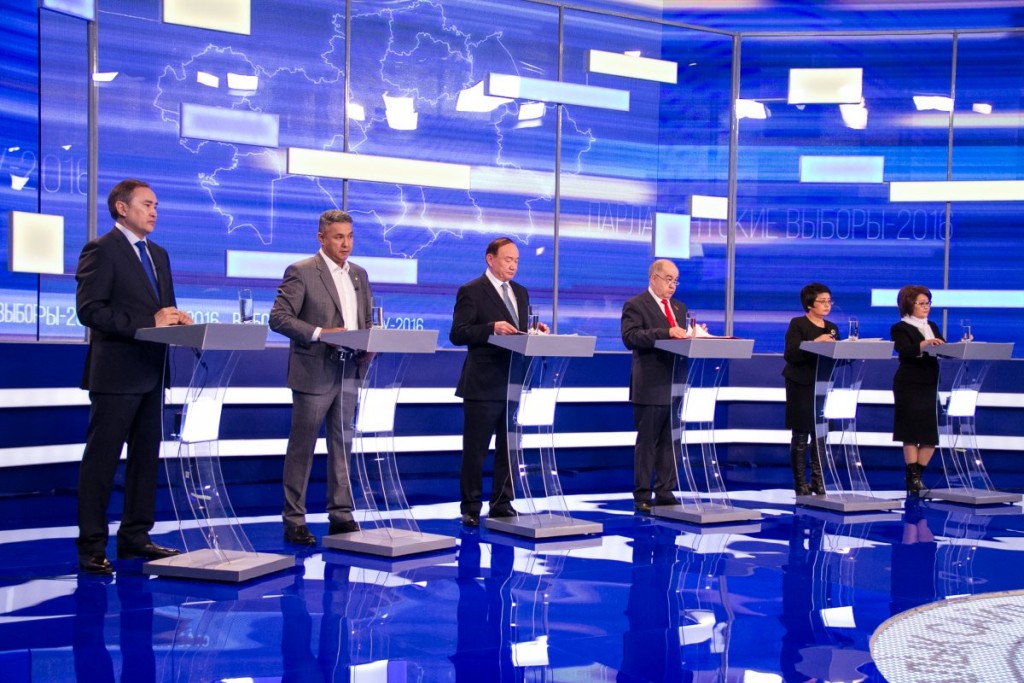 Led by two hosts, the debates had three rounds. During the first round, each speaker had two minutes to share his party’s view on the theme “the new reality of the world economy: problems and perspectives.”

In terms of the new reality, it is necessary to support employment, continue the quality transformation of the economy and lower its dependence on the external factors, noted Nur Otan Party First Deputy Chairman Askar Myrzakhmetov.

“For the solution of the first issue, anti-crisis measures have been taken. The first key is the Nurly Zhol programme; it will provide 400,000 jobs. In addition, the road map of employment has been strengthened on the instructions of the head of the state. This year, 100 billion tenge (US$289.7 million) has been allocated to support 60,000 workplaces,” he said.

Transforming the economy is a system task and the work has been done for years, added Myrzakhmetov. He highlighted the results achieved by Kazakhstan since its independence.

During his speech, Ak Zhol (Bright Path) Democratic Party Chairman Azat Peruashev noted the importance for Kazakhstan not to rely on natural resources and raw materials, but to make its own products. The pro-business party’s leader indicated the necessity to support domestic producers.

“We have to put up a barrier to overcome corruption. To make the state enterprises and national companies work, everyone who is involved in state procurement [must be] as transparent as possible,” he said.

“Agro science has to work for the benefit of production. The integration of education, science and production is necessary today. The agrarian sector can become a driver of the national economy of Kazakhstan,” he stressed.

Vladislav Kosarev, honorary secretary the Communist People’s Party of Kazakhstan (CPPK), said the economy should be restored on the principles of “social justice, truth and humanity.”

“Our party thinks that the income in the country will suffice for all if it is distributed right. The honest, dedicated and open-to-society labour must become the main source. The human and his needs need to be in the centre of politics,” he said.

Nationwide Social Democratic Party (NSDP) representative Zauresh Battalova insisted Kazakhstan is in the midst of a crisis due to internal rather than external factors. She called for ensuring a decent standard of living and the total eradication of poverty.

“The globall crisis does not exist; on the contrary – oil prices decline, fuel prices as well, and there is deflation,” she said.

Birlik (Unity) Party member Roza Kuanyshbayeva talked about the country’s environmental problems and deficit of water resources. Her speech was based on implementing the principles of a green economy, stressing the rational use of natural resources and greening of industrial production.

“Only in absolute harmony with nature will mankind be able to answer any global challenges,” she said.

The first round was completed with a series of questions posed by the representatives to one another. Each could ask only one opponent and answer only one query. They had 20 seconds to ask and one minute to answer. The questions included the electoral programmes, measures to overcome world crises, steps to support the country’s people and the green economy.

The second round was dedicated to the topic “infrastructure, transport, logistics and modernisation in modern conditions.” Party representatives shared their views on the topic and answered the hosts’ questions about the innovative solutions the parties proposed in order to develop the infrastructure.

Myrzhakhmetov noted more funds have been allocated this year by the Nur Otan government to construct affordable housing and the issue of gasification of southern regions will be solved as well. Attention will also be paid to the topic of providing drinking water to human settlements.

“Within the presidential programme, more than 8 trillion tenge (US$23.2 billion) is invested in Kazakhstan’s infrastructure. It will also contribute to the creation of hundreds of thousands of workplaces. In addition, the programme will provide development of related areas,” he said.

Peruashev stressed the importance of 100 percent of petrol being produced in the country, as well developing the quality of service in all aspects and encouraging private initiative.

Bektayev said the Auyl Party is proposing to develop a state programme of rural infrastructure to develop and approve state standards for settlements. He noted the party stands against chaotic urbanisation of the rural population.

“Today, cities do not have the ability to create all the living conditions of life for the rural population who move into the city. It is necessary to create conditions for life and culture in the villages,” he added.

Kosarev spoke again about labour and its role as the main driver of the country’s economy.

“We call for an economy built on the communist principle – each person receives according to his contribution. The most important step is the establishment of control over pricing and the return of the socialist planning practice,” he added.

“It is essential to double the minimum subsistence level and income of the population to provide housing for low-income and young families. It is necessary to introduce free education and health care. It is necessary to stop the endemic privatisation of strategic enterprises,” said Battalova in her turn.

Kuanyshbayeva repeated the importance of green economy and said all state programmes need to comply with its principles.

During the third round, the participants had the opportunity to once again appeal to voters and reiterate the main reasons why they should cast ballots for their particular party. Most asked people to follow their hearts and make the decision they feel is right.