ASTANA – The six parties competing for 98 seats in Kazakhstan’s Mazhilis (lower chamber of Parliament) and the 10,825 candidates running for seats in maslikhats (local legislatures) are intensifying their campaigns in the final days before the March 20 elections, making last appeals to voters across the nation. 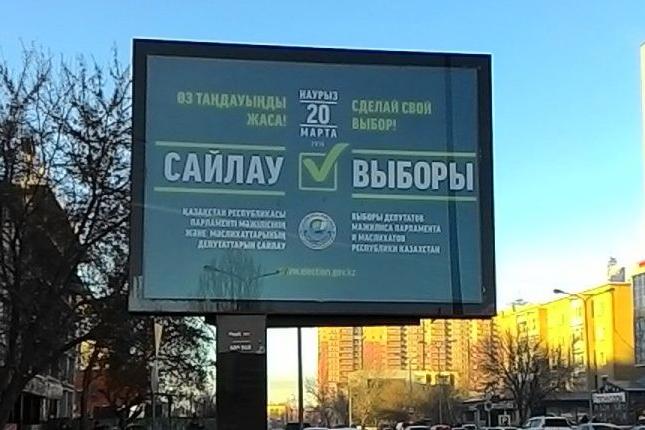 In addition to traditional posters and leaflets, meetings with voters, battling in newspapers and social media campaigning, the party leaders will deliver their messages and trade barbs during an electoral debate on national television March 16. The Central Election Commission (CEC) confirmed the debate on Khabar TV two days prior.

According to the CEC, one representative from each political party is invited to participate. Interestingly, the announcement highlighted that “the participants must refrain from personal attacks; statements deliberately discrediting the honour, dignity and business reputation of a political party [or] its members; or discrimination against members of other political parties, and comply with generally accepted standards of ethics.”

Leading the six competing parties is the Nur Otan party, led by President of Kazakhstan Nursultan Nazarbayev, which has dominated the Mazhilis. The right-centrist, pro-business Ak Zhol Democratic Party and the leftist Communist People’s Party will seek to maintain and, if possible, increase their presence in the legislature. Left-of- -centre agrarians the Auyl Party and the National Social Democratic Party (NSDP), as well as the election’s only newcomers, the centrist Birlik (Unity), will also strive to reach the 7 percent threshold in order to represent their voters in the next Mazhilis.

The early vote will also serve as another major test of the ruling party’s appeal among the electorate amid the challenges Kazakhstan’s economy has faced since revenues from oil and metals, the country’s main exports, began their long fall more than a year ago.

Despite a deep devaluation of the national currency, the tenge, the government’s anti-crisis policies seem to have generated at least partial success, as the economy has avoided recession despite seeing nearly worst-case global and regional economic scenarios come true for Kazakhstan’s key trade partners, with the Russian economy nearly grinding to a halt because of low oil prices and Ukraine-related Western sanctions, sluggish growth in the Eurozone, and an obvious, probably long-term, slowdown in China.

On Election Day itself, a number of exit polls are scheduled to be held to provide early projections of the result immediately after midnight on March 21, as the electoral code allows. The largest among those is being arranged by the Institute of Democracy led by Yulia Kuchinskaya, who conducted a similarly scaled project after last year’s presidential poll. This year, the institute announced it would put surveyors at 550 polling stations across Kazakhstan. Kuchinskaya estimates the margin of doubt for her exit poll to be around 0.5 percent.

Naturally, much of the final count’s credibility will depend on the parties and voters reactions to the CEC-announced result, but also on the assessments of domestic and foreign observers. Among the former, in addition to those fielded by the parties, the largest group will be the National Public Commission for the Monitoring of Elections, known by its Russian acronym ROKKV. The group promises to place up to 10,000 observers across most of the 9,840 polling stations set to open on the voting day.

The CEC announced that 815 international observers had been registered by March 14, while Kazakhstan’s Foreign Ministry has accredited 140 foreign reporters aiming to cover the upcoming vote.

On March 11, one of the larger international observer groups, the mission of the Commonwealth of Independent States (CIS), issued its interim report, in which it assessed the pre-election process as being sufficiently transparent.

On March 11, an election observation mission of the OSCE/ODIHR (Organisation for Security and Cooperation in Europe/Office for Democratic Institutions and Human Rights) also published its interim report. Among other findings, the report noted good organisation of the electoral process and openness of the CEC for observers and media, in addition to a few critical points raised. The OSCE/ODIHR has observed eight elections in Kazakhstan, most recently the 2015 early presidential election. The mission does not observe municipal elections.

Apart from the 98 seats in the Mazhilis contested through party lists, Kazakhstan’s Constitution provides for a guaranteed presence in the chamber for the Assembly of the People of Kazakhstan, a consultative body comprising ethnic community associations thus representing interests of the country’s 130 ethnic groups. The assembly will elect its nine representatives to the Parliament during the special session scheduled to take place March 21, which will finish the formation of the new legislature set to work for the next five years.