By Kamila Zhumabayeva in Nation on 10 March 2016

ASTANA – While the opening of a fast-food restaurant is not normally a big deal for most countries, in Kazakhstan, it became quite an event. The launch of the country’s first McDonald’s caused a big stir among capital residents at the site and on social media, and even politicians and government officials attended the official opening of the restaurant’s first branch in Astana on March 8. 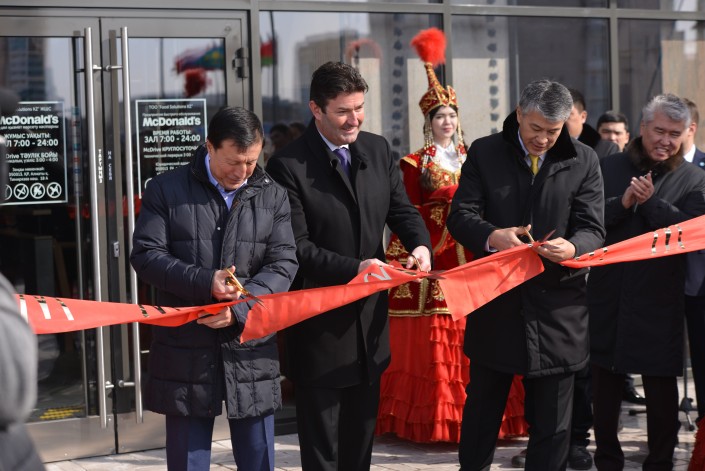 “McDrive gathered quite a queue. You can order food outside without a car, you just have to walk up to the cash window right away. The self-service terminal interested me the most; it is a good idea but looks like it won’t work with my Maestro card. I paid cash,” said Facebook user Yerlan Sakenov. “The restaurant and cash register equipment doesn’t accept Maestro cards, neither at the cash window nor the terminals.”

According to Sakenov, not being able to use Maestro cards is a big drawback at Astana’s McDonald’s.

People were lining up to be among the first to visit, and the restaurant’s territory was crowded for the first few hours after opening. Some agree that the country benefits from the opening of the global fast-food franchise in terms of investment, and that the health problems associated with fast food can be avoided by eating it in moderation.

“The chain of companies will provide about 20,000 citizens with jobs, potentially. McDonald’s products will be made using 70–80 percent local products. Investors often explore representations of global brands in a new market before entering it and McDonald’s is surely not last on this list,” Nazarbayev’s press secretary, Dauren Abayev, said, according to Tengrinews.kz, explaining the presidential visit to the restaurant on March 5.

The Astana McDonald’s total area is 863 square metres and the restaurant will have 206 seats. More than 200 jobs will be created at the company. A second restaurant is to be located on 49 Bogenbai Batyr Avenue, the capital’s akimat (city administration) has announced.

Building and opening the restaurant in Astana cost $3.5 million, Tengrinews.kz reported. The restaurant will be open 24 hours a day. Kazakhstan’s menu will contain basic meals common in McDonald’s restaurants around the world. About 15 more restaurants will open in the country in the near future. A McDonald’s in Almaty is planned to be opened in the first half of the year, according to the agency.