Kazakhstan Intends to Continue Strategic Partnership with US, Ambassador in Washington Says

As announced earlier by Kazakhstan’s Foreign Ministry press service, President Nursultan Nazarbayev this week will take part in the Nuclear Security Summit in Washington, DC. The fourth summit of heads of state, prime ministers and heads of nuclear security organisations aims at revitalising the activities of the existing multilateral structures to ensure the safety of vulnerable nuclear materials in order to stave off nuclear smuggling and deter, detect and disrupt nuclear terrorism attempts. 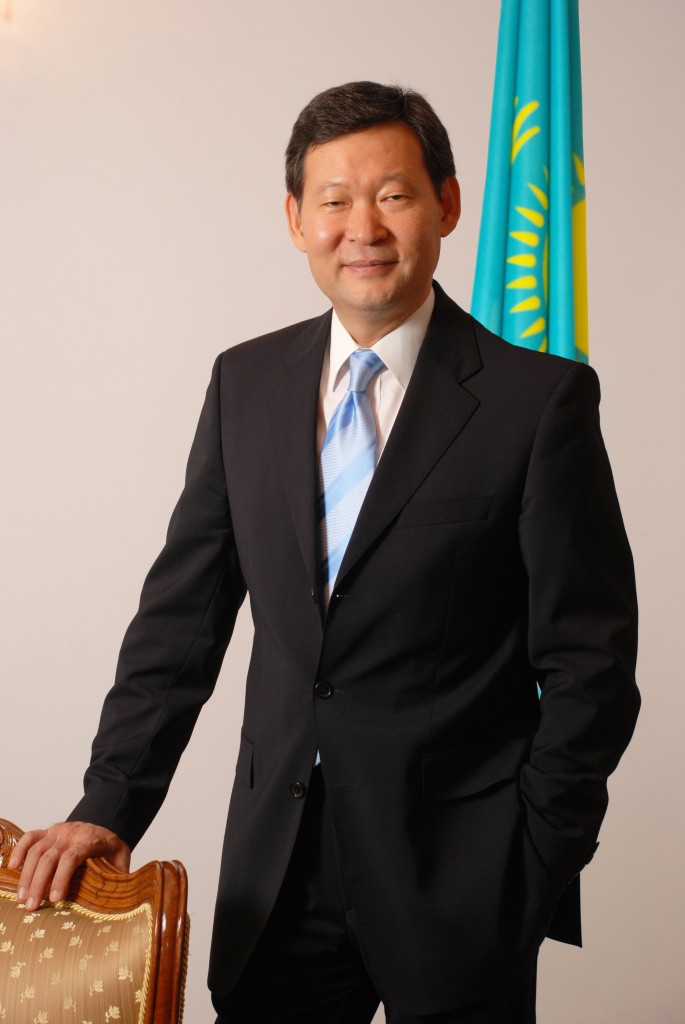 Ambassador of Kazakhstan to the United States Kairat Umarov

Ambassador of Kazakhstan to the United States Kairat Umarov shared with The Astana Times what can be expected from the upcoming fourth and final Nuclear Security Summit.

Mr Ambassador, can you please share your view on what is the rationale behind the U.S. initiative to convene such summits on nuclear safety?

The commitment of U.S. President Barack Obama to non-proliferation is well known. Speaking in Prague in 2009, he called nuclear terrorism “the most immediate and extreme threat to global security.” The following year, the first Nuclear Security Summit was held in Washington in order to draw the world’s attention to the threat of nuclear terrorism at the highest level. More than 50 heads of state participated in the summit, which is the largest number of participants since the formation of the UN. This was followed by two more summits: in Seoul in 2012 and in The Hague in 2014. The same year in Berlin, the U.S. President officially announced plans to host the fourth and final Nuclear Security Summit in 2016.

What is the benefit of holding the summits? Are there any tangible results from the meetings?

Following the summits, countries and multilateral organisations made dozens of commitments. The parties have achieved tangible results in improving the security of materials and strengthening international institutions supporting nuclear safety. Many member states voluntarily made commitments to take specific measures to strengthen internal nuclear safety, as well as raise the level of global security through bilateral or multilateral mechanisms. According to research institutions, 95 percent of the commitments made in Washington in April 2010 had already been implemented by 2014.

At this point, I would like to specifically highlight the significant contribution of President Nazarbayev and the country as a whole in this process. In November 2010, co-chairmen of the bilateral Energy Partnership commission, Minister of Oil and Gas of Kazakhstan Sauat Mynbaev and U.S. Deputy Secretary of Energy Daniel Poneman, announced the “safe closure” of the industrial nuclear reactor BN-350 in Aktau city, where plutonium had been produced. The completion of this programme is one of the significant highlights of the 15-year track record of strategic partnership between the two countries in reducing nuclear threats around the world. The amount of plutonium transported to safe storage was sufficient for the production of more than 70 nuclear weapons. This project involved hundreds of Kazakh and American scientists, engineers and safety, security and transportation experts. In 2010 alone, 12 shipments containing spent fuel in special transportation and storage containers were conducted from Aktau over a distance of more than 3,000 kilometres to eastern Kazakhstan. In the framework of the first summit, recognising the significant achievements of Kazakhstan in the field of disarmament and non-proliferation, President Obama rightly called Kazakhstan a world leader in this field. Thanks to the proactive position of our President, we remain recognised today as a global leader in the field of non-proliferation.

During the Seoul summit, the agenda was advanced by focusing the international community’s attention on the requirements to develop effective national and international measures to strengthen nuclear safety. On the sideline of the summit, presidents of three countries – Nazarbayev, Obama and Dmitry Medvedev of the Russian Federation – adopted a joint statement regarding the successful cooperation at the former Semipalatinsk nuclear test site, which was closed exactly 25 years ago on Aug. 29, 1991. They announced the completion of long-term cooperation to effectively lock down the tunnels in the Degelen mountain range, where underground nuclear tests took place, and described it as a bright example of effective trilateral collaboration.

The Hague summit built on the achievements of the previous two summits in 2010 and 2012 and focused on achieving three main objectives: reducing the number of dangerous nuclear material in the world; increasing safety of all nuclear materials and radioactive sources and improving international cooperation.

What should the world expect from the 2016 Washington Summit?

It is expected that the 2016 summit will lead to a more sustainable model for a stronger security architecture effectively promoting key objectives of the summits interacting with the International Atomic Energy Agency (IAEA) and other relevant organisations.

And again, Kazakhstan will come to the summit with an impressive track record of achievements and new initiatives, among which the most important for the international community is the international Low-Enriched Uranium Bank in Ust-Kamenogorsk.

Why is the current fourth Nuclear Security Summit in Washington the final one? Will there be other summits on nuclear themes at U.S. initiative?

The convening of the Nuclear Security Summit has been a personal initiative of President Obama, for whom the current year will be the final year of his presidency. The question whether similar summits will be convened in the future depends on the decision of the new administration in the White House. Currently, the United States is undergoing significant changes in its domestic politics. Now, the election campaign in the United States is going into a more active phase and has identified the main favourites of the race from the two parties. The visit of President Nursultan Nazarbayev to Washington in these conditions will re-emphasise the continuity of the strategic partnership between the two countries in the field of nuclear security and Kazakhstan’s leadership in the global anti-nuclear movement.

Could you elaborate on what Kazakhstan brings to the upcoming Nuclear Security Summit in Washington?

The visit of our President to Washington will allow Kazakhstan to reconfirm its commitment to non-proliferation and international security, to share experiences and vision for finding solutions to issues of the physical protection of nuclear materials.

Fifty-two heads of state and international organisations are invited to the summit. As I mentioned, Kazakhstan is coming to the summit with impressive achievements, both in terms of global cooperation in the nuclear field and in the context of the bilateral strategic partnership with the United States. Even a short list of successful joint projects with the U.S. indicates a breakthrough in this area. These include the conversion of WWR-К reactor of the Institute of Nuclear Physics of Kazakhstan to the low-enriched uranium, the creation of the Nuclear Safety Centre, and the construction of the Central Reference Laboratory in Almaty. The Obama administration has supported a number of Kazakh peace initiatives, including through signing of the Protocol on Negative Security Guarantees to the Central Asian Nuclear-Weapon-Free Zone Treaty concluded in 2006.

How do experts and officials in the United States assess the establishment of the Low Enriched Uranium (LEU) Bank in Kazakhstan?

The signing of the agreement between Kazakhstan and the IAEA in August 2015 on the establishment of the LEU Bank in our country was highly regarded by the international community and, in particular, the United States.

Recently, on the eve of our President’s visit to Washington, U.S. Congressmen Dana Rohrabacher and Alcee Hastings made statements into the Congressional Record. Both congressmen underlined the historic decision of President Nazarbayev to unilaterally renounce Kazakhstan’s nuclear arsenal and establish the unprecedented LEU Bank in our country that provides a secondary market for low-enriched uranium. In the United States, they understand and appreciate that the LEU Bank guarantees all nations access to peaceful nuclear power and, more importantly, rules out the rationale for developing nuclear enrichment technologies of their own.

During the Nuclear Industry Summit to be held on the sidelines of the Nuclear Security Summit, it is expected that Kazakhstan and KazAtomProm will be awarded for implementing the initiative on the establishment of the LEU Bank in Kazakhstan.

How does the United States assess the role of Kazakhstan in addressing the Iranian nuclear issue?

The role of Kazakhstan and our President in the launch of the Iranian nuclear negotiations and in the implementation of the Joint Comprehensive Plan of Action (JCPOA) has been repeatedly recognised by President Obama and U.S. Secretary of State John Kerry in various public statements.

On Dec. 28, 2015, the U.S. Department of State released a statement by Secretary Kerry, in which he thanked Kazakhstan for its role in the shipment of nuclear material out of Iran. The statement also noted Kazakhstan’s contribution by hosting of early rounds of negotiations that “led to the successful conclusion of the JCPOA. Let us recall that on Dec. 27, 2015, in coordination with P5+1, Iran, the IAEA and the UN Security Council’s relevant structures, Kazakhstan supplied Iran with 60 metric tonnes of natural uranium as compensation for the removal of low-enriched uranium from that country. We are convinced that this will strengthen the non-proliferation regime, the realisation of the legitimate rights of states to develop peaceful nuclear power and have non-discriminatory access to nuclear fuel.

How do you assess current bilateral relations with the U.S.?

Relations between Kazakhstan and the United States over the last few years have gained strategic character and reached a level of mature partnership based on personal respect and mutual understanding of the leaders of our countries.

This year is a jubilee of our bilateral cooperation: in 2016, we celebrate the 25th anniversary of establishing diplomatic relations between Kazakhstan and the U.S., which was among the first countries to recognise our independence.

2015 was a successful year in terms of bringing our strategic partnership to a new high level. Last year, the Presidents of Kazakhstan and the United States held a meeting on the sidelines of UN General Assembly in September 2015. In April 2015, we had Prime Minister Karim Massimov’s visit to the US. In November 2015, a historic visit of Secretary Kerry to Kazakhstan and Central Asia took place, where a new mechanism of cooperation between Central Asian countries and the U.S., C5+1, was launched.

In conclusion, could you mention the prospects for the development of bilateral relations between Kazakhstan and the U.S. in the near future?

We intend to continue our mutually beneficial and fruitful strategic partnership with the U.S. Kazakhstan has always been an active supporter of nuclear security worldwide. We will continue to maintain a keen and multifaceted dialogue with our American partners on a wide range of issues.

High dynamism in relations between our countries enables us to actively cooperate not only bilaterally, but also on the regional and international issues of mutual interest.

The U.S. appreciates our balanced and multi-vector foreign policy, good relations with our neighbours in the region and beyond, as well as large-scale and strategic vision of global issues. And the upcoming summit, to which Kazakhstan brings a solid record of completed projects and tangible contribution to the common cause of strengthening international security, is a testament to this.

Kazakhstan is a leader in the process of nuclear non-proliferation. This is already a widely recognised fact.