By Malika Orazgaliyeva in International on 1 March 2016

ASTANA – The Parliamentary Assembly of the Organisation for Security and Cooperation in Europe (OSCE) should act in “a spirit of a common political project” and seek understanding, rather than create divisions, Speaker of Kazakhstan’s Senate Kassym-Jomart Tokayev told parliamentarians from 57 participating states. 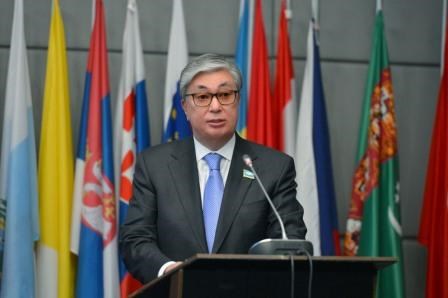 “The OSCE Parliamentary Assembly should act in the spirit of a common political project,” said Tokayev as he addressed the 15th winter meeting of the OSCE PA in Vienna on Feb. 25-26. “We find any policies aimed at blocking members of parliaments, in particular their speakers, from attending our forums by imposing visa restrictions to be fully unacceptable. There should be no room for sanctions in politics in the 21st century, since they shatter the world economy. The right to impose sanctions is an exclusive power of the UN and ought to be applied in exceptional cases.”

In his remarks, Tokayev who led the Kazakh delegation for a meeting of around 300 members of parliaments who gathered at Vienna’s Hofburg Congress Centre, focused on modern challenges in the OSCE areas, including the crisis in Ukraine and the need to have better dialogue among religious communities.

“The Minsk agreements and the package of measures [regarding the crisis in Ukraine] for its implementation create an essential framework to solve the crisis. It is time for all stakeholders to start acting and refraining from any confrontational rhetoric. We believe that the proposal to set up a contact group on Ukraine in the OSCE PA is still relevant today. We should not let this crisis slide into another frozen conflict,” he said.

In his speech, Tokayev further noted Astana will host a parliamentary conference “Religions against Terrorism” May 31 and invited the participants to take part in it.

He called terrorism “a complicated phenomenon poisoning the minds and souls of young people around the planet” and stressed the world needs a new ideology derived from the teachings of world and traditional religions in order to respond to this global menace.

“We welcome the agreement between the USA and Russia on the truce in Syria and urge all the parties concerned to strictly implement it in order to protect the fragile situation in the country. Despite any disagreements, we should all unite to combat existential threats. Eurasian security is our common historical responsibility. Addressing the UN (United Nations) General Assembly, our President Nursultan Nazarbayev proposed establishing a global network to counter terrorism.

He also told the audience about the Plan of the Nation launched by Nazarbayev last year.

“This comprehensive document implies civil service reform, enhancing the rule of law, economic diversification and business development, strengthening Kazakhstan’s identity and unity and creating transparent and accountable government. To support these sweeping reforms, the Parliament has already passed 59 laws and will consider some dozens more in the near future. On March 20 Kazakhstan will hold early parliamentary elections to the Mazhilis (lower chamber of Parliament), where six political parties will compete for the seats,” he said.

The parliamentary elections will be open and fair in compliance with national legislation and international standards, added Tokayev. According to OSCE PA Secretary General Roberto Montella, the PA will send about 70 observers to the elections.

According to the organisation’s website, the OSCE has a comprehensive approach to security that encompasses politico-military, economic and environmental and human aspects. It therefore addresses a wide range of security-related concerns, including arms control, confidence- and security-building measures, human rights, national minorities, democratisation, policing strategies, counter-terrorism and economic and environmental activities. All participating states enjoy equal status and decisions are taken by consensus on a politically, but not legally-binding basis.