By Dmitry Lee in International on 15 March 2016

ASTANA – Contacts between India and Kazakhstan go back over three millennia, with evidence of trading links between the Indus valley civilisation (3,300–1,300 BC) and the people who inhabited Kazakhstan, Ambassador of India in Kazakhstan Harsh Kumar Jain explained in an exclusive interview with The Astana Times. 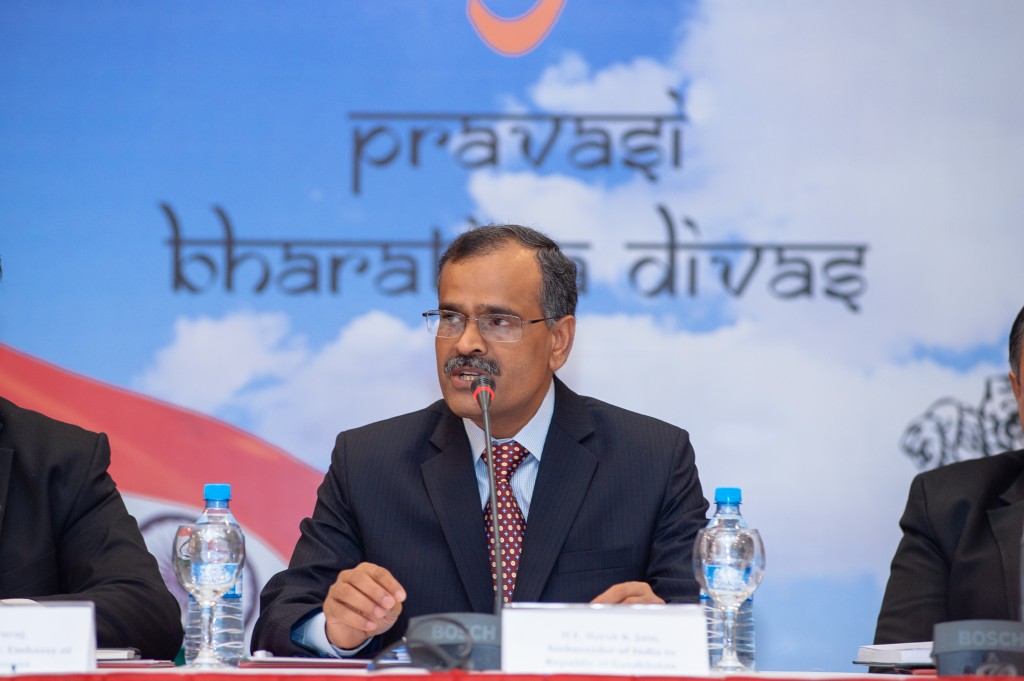 “The advent of the Great Silk Road significantly expanded these links with flourishing trade in goods, cultural influences and free exchange of ideas along the route.” Relations between the two countries have been always warm and cordial, he continued, and “are growing steadily.”

“India was one of the first countries to recognise Kazakhstan as a free, sovereign state after the break-up of the Soviet Union in 1991. India was the first country, outside [the Commonwealth of Independent States], visited by President Nursultan Nazarbayev in 1992. Since then, relations between the two countries have exhibited considerable dynamism and momentum.”

Relations were elevated to the level of strategic partnership during the visit of Nazarbayev to India in January 2009, when he was the Chief Guest at India’s Republic Day Parade.

“The visit by our prime minister to Kazakhstan in July 2015 has further strengthened these relations and opened new areas of cooperation. The two countries have excellent political relations, similarity of views on most international issues and cooperation in multilateral fora. India has been a consistent supporter of Kazakhstan’s initiative on the Conference on Interaction and Confidence-Building Measures in Asia (CICA) and Kazakhstan is supportive of India’s permanent membership on the UN Security Council and full membership in the Shanghai Cooperation Organisation (SCO).”

According to the ambassador, Kazakhstan is India’s largest trade and investment partner in Central Asia.

“Although the bilateral trade is modest, constrained due to lack of efficient transport connectivity, it is growing steadily. It has grown fourfold in the last decade. The bilateral trade reached $461 million in 2015, with Indian exports touching $241 million and imports from Kazakhstan $220 million. Major items imported by India are crude oil, natural uranium, asbestos and titanium and products exported to Kazakhstan are pharmaceuticals, tea, agricultural and industrial machinery, garments and textiles products, and chemicals. There is also significant import of Indian products into Kazakhstan through third countries.”

Jain also believes that “operationalisation of the railway line [connecting] Kazakhstan, Turkmenistan and Iran is a positive development,” which will make the movement of goods between India and Kazakhstan more efficient and cost-effective.

“Progress is also being made on the development of the International North-South Transport Corridor and setting up of a dedicated freight terminal on the west coast of India for trade with Kazakhstan.”

India was one of the first countries to confirm its participation in the Astana EXPO 2017.

“This was reaffirmed by [Indian Prime Minister] Narendra Modi during his visit to Kazakhstan. The India Trade Promotion Organisation (ITPO), a government of India enterprise, has been assigned the responsibility to coordinate India’s participation in the expo.” India signed an official participation contract last month.

Unveiling the concept of the Indian pavilion for the upcoming expo, the ambassador said “the India Pavilion will consist of a theme sub-pavilion focused on Future Energy that will showcase innovative green technologies, and a national sub-pavilion, which will showcase India’s strengths in areas such as science and technology, agriculture, automobiles, information technology, textiles, pharmaceuticals, gems and jewellery, handicrafts, leather and more.”

One of the largest service sector segments of the Indian economy is tourism and hospitality – a sector where the two countries could improve cooperation.

“The government has introduced a scheme of E-Tourist Visa Facility for citizens of over 100 countries, which allows them to apply for tourist visas online and receive electronic visa authorisation,” Jain reported. “The visa is issued on their arrival at an Indian airport. It saves them a visit to the Indian Embassy or consular office.”

Tourist inflows from Kazakhstan to India are modest but growing, he said.

“We issue about 15,000 visas annually. We already have a liberalised system for issuing visas to Kazakh citizens. Tourist visas are normally issued on the same day of submission of application.”

In the next three to four months, the Indian mission in Kazakhstan is expecting a visit by the Indian minister of state for petroleum and natural gas to co-chair the 13th meeting of the countries’ inter-governmental commission.

“A business delegation led by the Federation of Indian Chambers of Commerce & Industry (FICCI) would visit Astana in the third week of May to participate in KazBuild 2016 and attend the first meeting of the Joint Business Council,” Jain said.

“On the cultural front, the embassy will be organising a concert to celebrate the 10th anniversary of the establishment of the Centre of Indian Classical Dances led by Honoured Artist of Kazakhstan Akmaral Kainazarova on March 28 in Almaty and on March 30 in Astana. The embassy will also organise the second International Day of Yoga in Astana and Almaty in the third week of June,” he said.