By Anastasiya Prilepskaya in Op-Ed on 13 March 2016

The 10-year-old National Public Commission for the Control of Elections (ROKKV) has ramped up its activity in the weeks leading up to Mazhilis (lower chamber of Parliament) and maslikhat elections on March 20. ROKKV Chairman Nurlan Erimbetov discussed with Kazakhstanskaya Pravda issues of free and fair democratic elections, the influence of the electoral process on the public and the role of the ROKKV. 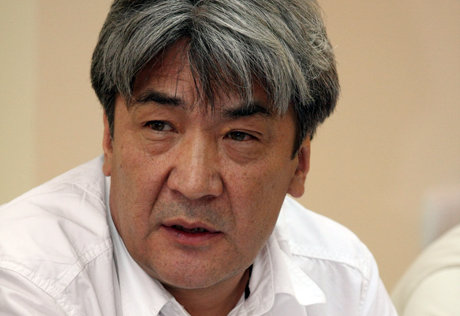 Please tell us about the history, activities and aims of the ROKKV.

The ROKKV has been working since 2005 and our activities are based on the principles of political neutrality, openness and objectivity. Indeed, we have accumulated a lot of experience during the three presidential election campaigns of 2005, 2011 and 2015, as well as two parliamentary campaigns in 2007 and 2012. I would like to emphasise that the ROKKV consists of well-known persons in Kazakhstan’s scientific and cultural circles, as well as political and governmental officials, representatives of nongovernmental organisations and trade unions.

It is important to note that respected, principled and honest people who are not afraid to speak up represent the commission.

The commission is represented across the entire republic, from big cities to small villages. Regional representations of the ROKKV observe elections in all 14 regions of the country, as well as Astana and Almaty.

Our main purpose is maintaining transparency in election processes at all stages in compliance with the constitutional rights of voters and candidates.

At the moment, our main task is training about 10,000 observers.

For this purpose, the ROKKV prepared a set of materials in the Kazakh and Russian languages. These materials include all practical details, down to what to do at the polling station and where to stand in order to not violate the rules.

For example, an observer has a right to be present during the counting of votes and no one can deny this right. With our materials, an observer can learn the arguments to defend his position based on Kazakhstan’s legislature and international norms. All materials are available electronically on www.bakylau.kz.

Besides teaching observers, the commission will monitor information programmes, TV shows, online and media publications, as well as ensure equal opportunities for all political parties.

An important part of our work is cooperating with the Central Election Commission [CEC], the office of the Prosecutor General, the headquarters of the political parties, the media, international observer missions and representatives of civil, scientific and expert communities.

Regarding training Kazakhstan’s election observers: could you talk more about the process of selecting them? What are the requirements?

First of all, I would like to stress one important positive trend in our society: today’s young generation is politically active. They want to be election observers. Although the commission gives preference to experienced people with professional backgrounds, we also involve young people. I cannot say that it is a competitive selection process, but potential observers have to meet certain requirements.

We focus on people who know the laws, have some kind of authority in a certain area, participate in elections and are involved into the country’s political life. The observer must be an honest, principled, responsible and respected person.

As CEC representatives have noted, international organisations are interested in the election campaign in Kazakhstan, and many foreign observers are coming to Kazakhstan. How do they cooperate with the ROKKV?

Our commission works actively with observers from international organisations. A few days ago, the ROKKV management met with representatives of the Commonwealth of Independent States [CIS] mission. They do not have any comments on the process of the electoral campaign in Kazakhstan. The CIS mission expressed the desire to cooperate with the ROKKV; therefore, we will meet frequently to share information. We are also planning a meeting with observers from the Shanghai Cooperation Organisation (SCO) and the OSCE/ODIHR [Organisation for Security and Cooperation in Europe Office for Democratic Institutions and Human Rights] mission.

Concluding the results of my meetings with international observers during the four election campaigns in which I worked, unfortunately, I can note that they know very little about Kazakhstan’s political life.

However, they very often wonder about special spirit of interethnic peace in our country. The unique model of our multi-ethnic society is already the hallmark of Kazakhstan.

Thanks to the foreign observers, the elections have become a powerful factor in creating a positive international image of our country.

ROKKV representatives are now observing preparations for the Mazhilis and maslikhat elections. Please share with us the preliminary findings on the election campaigns.

Our representatives have already met with the leaders of all political parties and now members of the commission are touring the regions. No violations of election legislation have been observed. We also have not received any complaints from political parties regarding media coverage of the election campaign or CEC activities.

It is worth pointing out that there are six parties taking part in the parliamentary elections, which shows a high level of political activity. These six parties are the six representatives of different classes of society; each party has its own political views, goals, experience and its own electorate.

We should not forget that the elections are not only politically, but also socially significant. Observers and journalists, both Kazakh and foreign, during the election campaign visit different cities, live in hotels, go to malls and markets and communicate with ordinary people. The observers see whether there is Internet access in the village, [see] the quality of roads and infrastructure. People, in turn, seeing the attention they are getting, tend to speak out. They express their opinions, not only on the elections, but also on social and economic issues; on the problems in their regions, their families, schools, kindergartens, hospitals, their work and opportunities. It means that the elections are a kind of a barometer of public opinion, changing moods. Thanks to the elections, the problems and aspirations of people from the remote regions reach the centre, Astana, so the government can pay attention and take the mood of the citizens into account.

A new Mazhilis will be formed after the Parliamentary elections. What, in your opinion, should the new Parliament be like?

We need to remember that on Jan. 1, Kazakhstan began the practical implementation of five institutional reforms, among which is the formation of a transparent and accountable government. The deputies of the Parliament of the fifth convocation fully worked out and adopted a legislative framework for the Plan of Nation/100 concrete steps to implement the five institutional reforms. Now the updated composition of the main legislative body of our country will work on the implementation of the reform package.

The result of the elections will be an updated Parliament, which will be younger than the previous convocation, according to the younger average age of the candidates. It would be great to see people with active positions, who will defend their own points of view in the legislature. In the first place, we should not forget that the deputy is a voice for the electorate. Mazhilis members should fully use their professional and life experience, should work actively, should act not only on economic and political issues, but should also raise issues of the spiritual and moral education of families, youth, and the elderly.

It is important that people from the sphere of business, who have created themselves, have built their lives according to the laws of this country, come to Parliament. They know first-hand how these laws work and what is needed to improve them. They will work on legislation so that the regulatory framework will contribute to the development of all spheres of life, creating the best conditions.

The ROKKV works actively only during election campaigns. What will its members do afterward?

First, an analysis incorporating all the information coming from observers in the regions will be conducted. After studying and comparing the data, ROKKV members will hold a final press conference, give interviews and prepare articles for the media.

Second, information collected during the election period will not remain unused in the future. Our friendship and cooperation continues between elections, as the commission includes people who can make decisions and raise issues at a high level. Information from the regions will also be analysed and used in the future to address the socio-economic development of all regions of Kazakhstan.