By Kseniya Voronina in Business on 14 March 2016

Secretary of State of Kazakhstan Gulshara Abdykalikova paid a visit to the KazTexExpo automated trade-industrial complex to assess its work in meeting domestic demand for textiles and the role it plays in Kazakhstan’s growing system of vocational orientation and education. 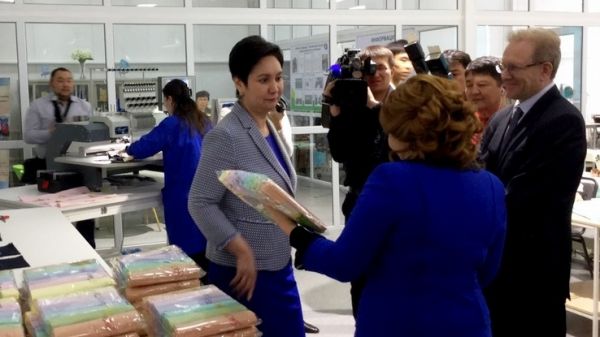 Member of the Council of Business Women of the Astana Chamber of Entrepreneurs Saule Shauenova, meeting Abdykalikova, said Kazakh enterprises are ready to supply domestically produced textiles to medical organisations, hotels and restaurants.

“The KazTexExpo complex assembles world-renowned Zoje sewing equipment, as well as produces clothing and knitted and crocheted products. The complex uses the latest technologies and actively participates in dual trainings in mechanical engineering and textile industries and develops professional standards and educational programmes. It also provides an internship platform for colleges and universities. We can fully meet the textile demands of Kazakh hotels and restaurants, as well as medical organisations, by sewing working clothes, school uniforms, business wear for men and women and outerwear for children,” explained Shauenova.

Abdykalikova stressed the importance of human capital development, which President of Kazakhstan Nursultan Nazarbayev has called one of the preconditions for becoming one of the 30 most developed countries in the world.

“It is important for pupils to choose the right sphere for their future career. First-graders usually dream of being cartoon characters; in the fourth grade they start thinking about their future profession. Later, in eighth grade, pupils have two or three possibilities in mind and in high school they usually know where they want to study and what profession to choose. This decision is often influenced by family members and friends, but today we are seeing a new system – a very important method of vocational orientation, which has already been attended by 75,000 children. Now we need to let all children go through this programme,” Abdykalikova said.

The secretary of state recalled the request of the President of Kazakhstan to establish free vocational education starting in 2017.

“Special training for professionals working in six key sectors of economy is being held in the country’s top 10 colleges and universities as part the State Programme for Accelerated Industrial-Innovative Development for 2015–2019. Later, more educational organisations are expected to join the programme. To date, 29 educational complexes covering over 20,000 pupils from fifth to 11th grade have been established in nine regions of the state to provide career guidance and help in professional self-determination of young people,” said Abdykalikova.

It was reported that currently, more than 70 percent of open vacancies in the labour market are in the operating and technical spheres. The greatest number of vacancies (14 percent) are meant for support personnel, as well as for highly skilled workers in large and small industrial companies, construction, transport, communications and geology.