ASTANA – Kazakhstan and Cuba are about to witness a historic moment: Kazakh President Nursultan Nazarbayev will pay his first official visit to Havana on April 2-3. 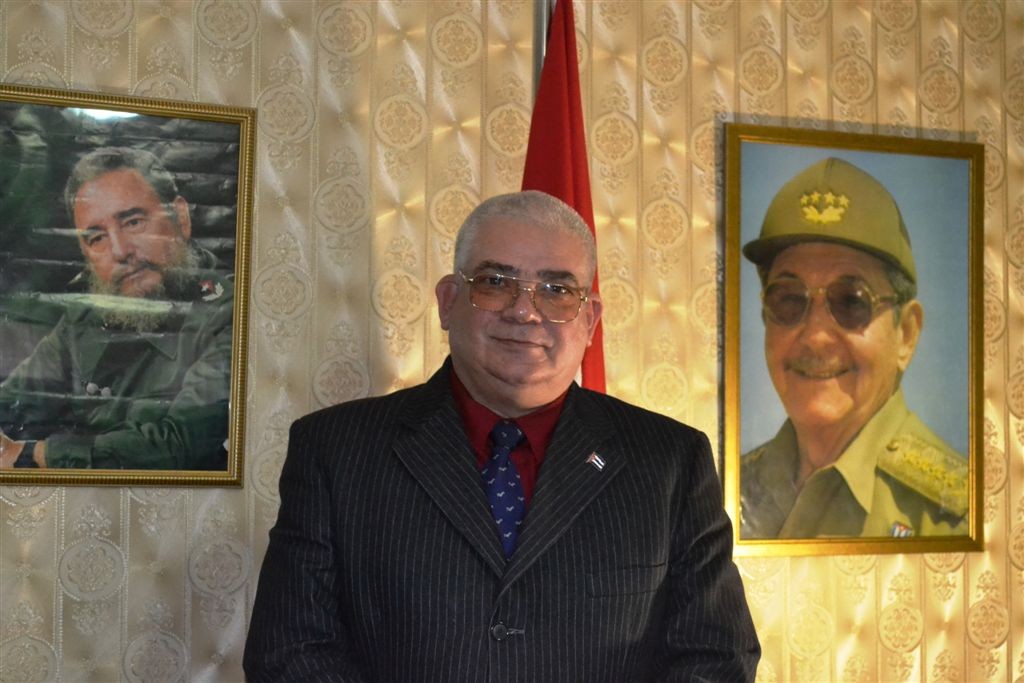 “We will meet the President not only as the head of state, but also as a friend of the Cuban people,” said Cuban Ambassador in Kazakhstan Carlos Valdés in an exclusive interview with The Astana Times.

The ambassador stressed Cuba was one of the first countries to recognise Kazakhstan’s independence; however, this will be the Kazakh President’s inaugural trip to the island nation.

“No doubt this visit will serve as an important step in strengthening the bilateral relations in such areas as politics, economy and culture,” he said.

The visit will also include meetings between the countries’ foreign ministers.

“[Senior officials] will sign a memorandum of understanding (MoU) on cooperation in the fields of labour, employment and social protection,” said Valdés.

As the third Cuban Ambassador in Kazakhstan, he has continued the topic of cooperation between the two countries and highlighted the importance of high-level diplomatic and political cooperation.

“Kazakhstan is very interested in the leaps Cuba made in the sphere of medicine. For the biggest part [it has been] in biotechnological products, vaccines and medical services in general, although the turnover between our countries has a lot of room for improvement,” he said.

The ambassador added Cuba is becoming an attractive destination for Kazakh tourists.

“About 2,000 Kazakh citizens visited Cuba in the past two years. To add to that, in 2014 the two countries signed a MoU in the sphere of education and science and physical culture and sports. In 2015, the countries signed a visa-free traveling agreement which is still the process of coming into force.

“Cuba is a famous Caribbean tourist destination, with its various sightseeing spots, excellent climate, gorgeous beaches and hospitable people. Over a million tourists already travelled to Cuba in just the first three months this year. Many people speak Russian, so for the Kazakh tourists this can be helpful,” said Valdés.

In his interview, the ambassador also answered some questions about recent historic moments in Cuba.

“[United States President Barack] Obama’s visit to Cuba was undoubtedly an important moment in the process of restoration of diplomatic relations between the two countries, which began on December 17, 2014,” he said.

Obama was met with characteristic Cuban respect and hospitality.

“Nevertheless, although we recognise the efforts of Obama’s administration, there is still a long way to go in the normalisation of these relations,” he added.

“The blockade is the most important obstacle to our economic development and the welfare of the Cuban people; thus, its removal is essential for the normalisation of bilateral relations. In order to move towards normalisation, the illegally-occupied territory of the Guantanamo naval base must be returned.

“Also, other policies against Cuba must be stopped in order to have normal relations between Cuba and the U.S. To do this, the Cuban people should follow and must not be demanded to abandon their destiny, free and sovereign, that saw a lot of sacrifices,” he said.

EXPO 2017 and Personal Thoughts on Kazakhstan

Cuba officially confirmed Nov. 15 it would participate in EXPO 2017 in the capital.

“Cuba pays due attention to the expo theme, as our nation strives to change its current energy matrix and wants to produce 24 percent of its energy from renewable resources by 2030.

“I have absolute confidence that Kazakhstan has great potential and will comply with all requirements during the organisation of this world event and no doubt will provide all the necessary conditions for international visitors to make the expo a success,” he said.

The ambassador underlined he feels at home in Kazakhstan despite the huge climate difference.

“I’ll tell you frankly and have repeated this several times: I feel at home in Kazakhstan. Despite the significant differences in the two climates, I feel very well in Kazakhstan. When it’s cold, you just need to dress warm. Low temperatures are compensated by the warmth of human relations, kindness and hospitality of the people of Kazakhstan.”

“I have many friends in Kazakhstan and have good relations not only with the Kazakh officials, but with ordinary citizens,” he said.

Valdés added he enjoys the capital.

“I really like Astana. When I presented my credentials to President of Kazakhstan Nursultan Nazarbayev, I personally told him ‘It’s amazing what has been done to build a modern and beautiful city in a short period of time in the middle of the steppe.’ It is amazing! I said that Kazakhstan has a lot to be proud of and the new capital is one of those reasons.

“I am sure that the Kazakh President’s visit to Cuba will bring Cubans and Kazakhs closer together and will strengthen the historic bonds of friendship that unite us,” he said.