By Kamila Zhumabayeva in Nation on 29 March 2016

ASTANA – A Bek Air Fokker-100 plane with 116 passengers en route from Kyzylorda (South Kazakhstan) to Astana made an emergency landing at the Astana International Airport on March 27 after its landing gear failed to deploy. None of the passengers or five-member crew were injured. 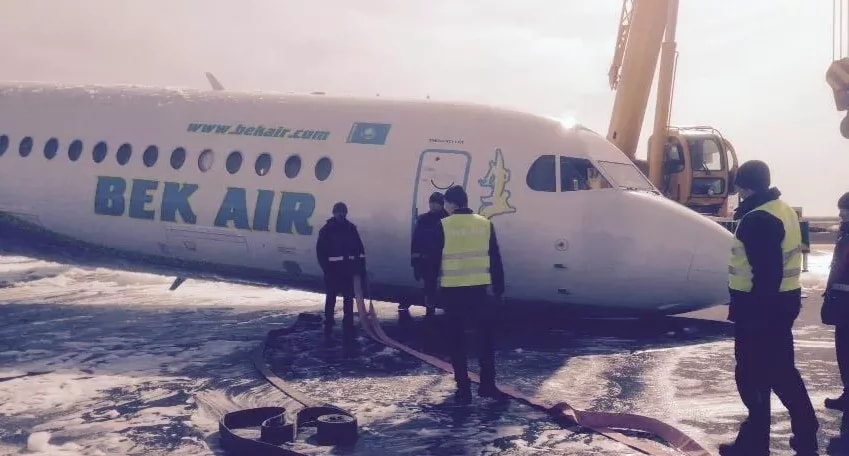 After attempting to fix the problem in flight, the plane made a controlled crash landing an hour behind its 9:45 a.m. arrival time, skidding on shields until it came to a stop. The runway had been covered in foam to prevent a fire and fire engines had been deployed to the runway, according to Forbes.kz. The plane had minor damage and will be repaired, said a Bek-Air company representative.

The commission of the Ministry of Investment and Development launched an investigation and passengers on the flight have the right to make a complaint to the prosecutor’s office and authorised bodies, Adilet Toktamysov, representative of Kazakhstan’s main transport prosecutors office announced.

Commander Dmitry Rodin and co-pilot Vadim Smerechansky will receive state awards for landing the plane safely and saving all passengers and crew on board, Minister of Investment and Development Asset Issekeshev announced on Facebook.

“To be honest I didn’t think of it in a so much heroic way as media presents it now. We are always trained for this type of situations and I think that everything went fine. It is mandatory for the aircraft to be inspected before every flight,” Rodin told the Khabar television channel in its Betpe-Bet programme, adding that it was not possible to detect the problem before it was time to land.

“Everything was well when we were flying from Astana to Kyzylorda. This issue occurred on the way back to Astana. … You can reveal an obvious issue, but when there is a concealed defect it is impossible,” the commander explained in the interview.

Rodin has been flying planes for 35 years and has had flights cancelled due to mechanical issues.