By Anuar Abdrakhmanov in Sports on 9 March 2016 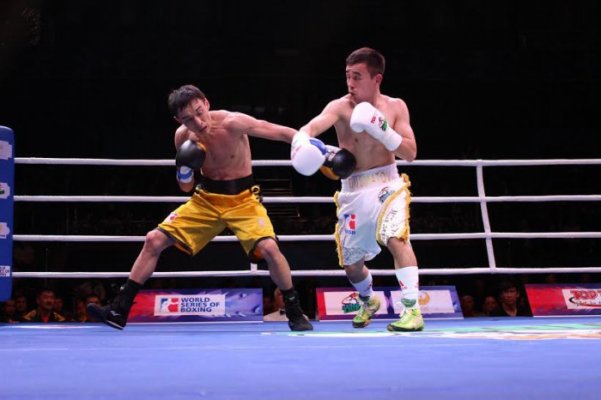 Some action during the match against Tashkent Tigers.

World Series of Boxing (WSB) reigning champions the Astana Arlans continue to defend their title in the league’s sixth season. Last week the Kazakh roster won an important away victory in Azerbaijan, overcoming opposition from one of the league’s strongest franchises to defeat the Baku Fires 3-2.

Azeri athlete Nasraddin Mammadov began impressively in the evening’s opening bout against Zakir Safiullin. The Arlans fighter, a Kazakh national lightweight champion, was good in counter-attacks, however, and untouchable in the final two rounds. The solid performance secured him a confident win on points to give the Astana club an early advantage.

In the third fight, Baku Fires welterweight Tamerlan Abdullayev made an excellent debut in the series and gave some hope to local fans by ending victorious against Aslanbek Shymbergenov.

The Arlans upset the audience as they grabbed the decisive third point in the lighter heavyweight confrontation between Nurdaulet Zharmanov and Baku Fires’ Belarusian boxer Mikhail Dauhaliavets. The Kazakh’s domination was evident from the start and he won by technical knockout in the second round.

The super heavyweight bout left no intrigue as to the match’s final outcome. Arslanbek Makhmudov managed to please the local crowd with a brilliant performance against Kazakhstan’s Nurzhan Bekzatov, which ended with another TKO, this time for the Azeri fighter in the third round.

“Congratulations to all Kazakhstan fans with a victory. We had a little nervous night. However, our boxers performed well. Only in the final bout was it evident that our boxer was giving in to his more experienced opponent. Overall, our guys were well prepared for the confrontation. [True] Shymbergenov lost his match, but he provided a decent fight, too,” said Serik Sapiyev, commenting on the final result. The boxing champion from the 2012 London Olympics is currently a general director of the Astana Arlans.

The success allowed the Kazakh team to regain some confidence following its first defeat of the new season, losing 4-1 a week earlier at the hands of strong WSB debutants the Uzbek Tigers.

The pundits noted the key reason for the failure was the boxers’ lack of preparation.

“We must admit that, unfortunately, in this match the Uzbek team was stronger. It was a just outcome in Tashkent. In 49 kilogrammes, Temirtas Zhussupov definitely lost. In 56 and 64 kilogrammes, both our fighters failed to show good boxing. In 75 kilogrammes, we were able to win the bout. In 91 kilogrammes Yerkin Mukhamedzhan looked a bit better than his opponent, but the judges ruled in favour of the Uzbek boxer,” said Sapiyev.

The Astana Arlans’ next opponent in the series will be the Puerto Rico Hurricanes. The match will take place March 19 in the Northern Kazakh city of Petropavlovsk.

Organised by the International Boxing Association (AIBA), the WSB is an international competition that allows professional boxers to maintain Olympic eligibility. Competitors taking part in the series must perform bare-chested and are not permitted to wear protective headgear. The Astana Arlans, part of the Astana Presidential Sports Club, won two of the franchise’s first five seasons, in 2012-2013 and 2014-2015.