ASTANA – On the day following the poll itself, foreign observers from various countries continued to share their impressions of the March 20 election. Most of them indicated the prevalent characteristics were good organisation, high voter turnout and people’s willingness to express their opinion. 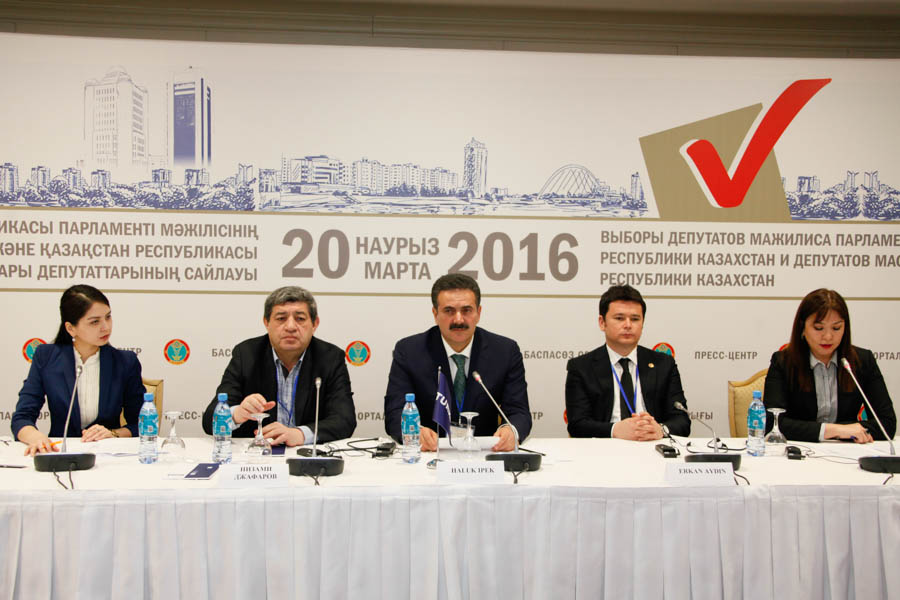 Bundestag (German Parliament) Foreign Policy Advisor Andreas Jahn was in Kazakhstan for the first time. He visited the city’s polling station number 120, noting the procedure he witnessed was fair and transparent.

“It was very interesting to observe the voting process and we were waiting for the upcoming results with the others. As I can observe, the election process was intense, a lot of people were involved. We also assisted in the counting of votes at the end of the day,” he said.

Jahn has previously been an election observer in Albania, Togo, and Uzbekistan.

“Each country has its own features. I was only in Astana. I cannot tell what was happening outside of Astana, but with regard to the process here, I think, that people were committed to the election, I can say that there was a large turnout. I think people really wanted to express their opinion,” he concluded.
International Tax and Investment Centre President and an United States international observer Daniel Alan Witt said he considered himself a veteran of the Kazakh election observation. 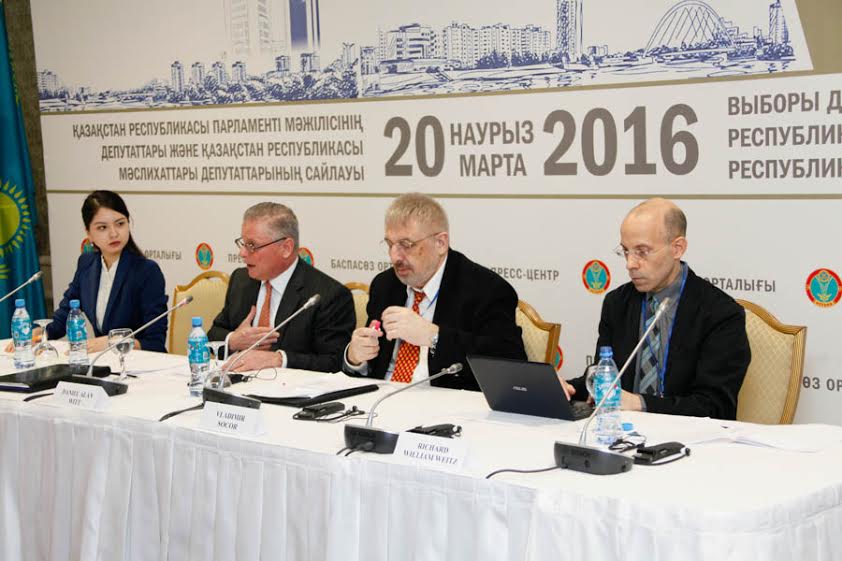 Witt said it was the sixth election he observed in the country, both presidential and parliamentary, and he noted a remarkable growth of Kazakhstan.

“Being here as observers, my team and me observe the elections not like the others. We are not technical experts, we have been working with you since 1991 and see great steps forward that are made by your country [towards the democratic development],” he said speaking to Kazakh media on April 21.

Witt also congratulated Kazakhstan with the successful election, which he called a positive step in strengthening democracy. According to him, seeing three generations of voters from our family coming to the polling stations at 9 in the morning really impressed him. “People went to vote for their [future],” he added.

“We have visited more than 30 polling stations in different parts of your city [Astana]. We were able to talk with the voters, with the representatives of polling stations inside and outside of the stations. In our opinion, the elections were held successfully,” he said.

Former U.S. Congressman Don Bonker, who represented Washington State, expressed his thoughts about his role.
“We see that the people of Kazakhstan are committed to democracy. I can confirm that the elections were efficiently and well organised,” he said.

As a former chairman of the Congressional Human Rights Foundation, Bonker noted he thought Kazakhstan was building a solid foundation in regard to the conducting elections.

“People use their right and it is very important. It is important that you are moving in the right direction with regard to reforms in relation to the market economy and the principles of democracy,” he said.

Centre for International Governance Innovation Senior Fellow and formerly Canadian ambassador to Kazakhstan Margaret Skok, who also served as an observer, commended the level of attentiveness of elections commissions members.

“Yesterday [March 20] I visited 12 polling stations. The elderly, the children came together with adults, and children helped to throw ballots into the boxes. I was impressed by an elderly man, whom I asked why he came to the elections at that age. He said that he wanted to influence the outcome – both at the local level and the regional. I also want to note that members of the election commission were very well prepared; they knew their job well,” said Skok.

Austrian politician and former President of the Organisation for Security and Cooperation in Europe (OSCE) Parliamentary Assembly Wolfgang Grossruck agreed with his colleagues.

“We are encouraged by what we saw during the elections. We have already been to your country, we have big experience, and we are seeing good progress in holding and preparing for the elections. Yesterday [March 20] we visited several polling stations. I can confirm that the vote at the polling stations was very well organised and meets the highest quality standards. We should also mention the members of the Central Election Commission; all of them were very well trained and prepared.”

“I think my colleagues will agree that the development of the electoral process in your country is moving for the better,” he said.

Representatives of the Turkic-speaking Countries (TurkPA) also shared their opinion on the event.
“The early parliamentary elections, as well as the elections to the local representative bodies (maslikhats), are in full compliance with the national legislation of Kazakhstan and international electoral standards,” said Haluk Ipek, head of the election observation mission of the Turkic-Speaking Countries Parliamentary Assembly (TurkPA) and member of Turkey’s Grand National Assembly.

According to the organisation’s mission, all the conditions for voting were created for the country’s citizens. The observers also noted the process was organised at a very high technical level.

“During visits to the polling stations no violations were detected. For this reason, we believe that the election was conducted objectively and openly, transparently and in a democratic manner,” said Ipek.

The director of the Institute of CIS and Eastern Europe countries, the President of the International Centre for the Study of Electoral Systems Alexander Tzinker from Israel noted the work of Centres for Services for Population (mainly known in Kazakhstan under their Russian acronym – TSONs) during the election.

“I would like to note TSONs. It is a great advantage because they allowed your citizens to quickly solve problems in those cases when a person does not appear on the registered voters list at a particular polling station. In other countries in cases like this people should go to courts, sometimes they are able to vote only on the second day. It is not so difficult procedure, but sometimes people are not willing to go through bureaucratic delays and they decide not to vote this time. And TSONs services helped to save votes,” said Tzinker.

Several Kazakh public associations have already made their reports.

Echo, a non-governmental organisation, stated the election was held according to Kazakh legislation and declared authorities ensured suffrage.

“An analysis of the results of the elections to the legislative bodies in 2012 and 2016 shows positive dynamics in the improvement of regulatory and legal framework, procedure and organisation of the elections,” stated its report.
The Youth Informational Service of Kazakhstan (League of Young Voters) detected several infringements, but recognised the election as valid.

“During the observation a positive trend was revealed, such as the perception of local observers by election commissions. The number of violations of their rights was substantially smaller as compared with the results in 2012. Also, technical equipment areas were improved: video surveillance was working in many areas, and comprehensive information on the electoral procedures was available as well,” according to its report.