By Malika Orazgaliyeva in Nation on 26 March 2016

ASTANA – Following the election of members of the Mazhilis in the March 20 nationwide vote, Kazakh President Nursultan Nazarbayev addressed the first joint session of the Senate and the Mazhilis of the 6th convocation March 25. 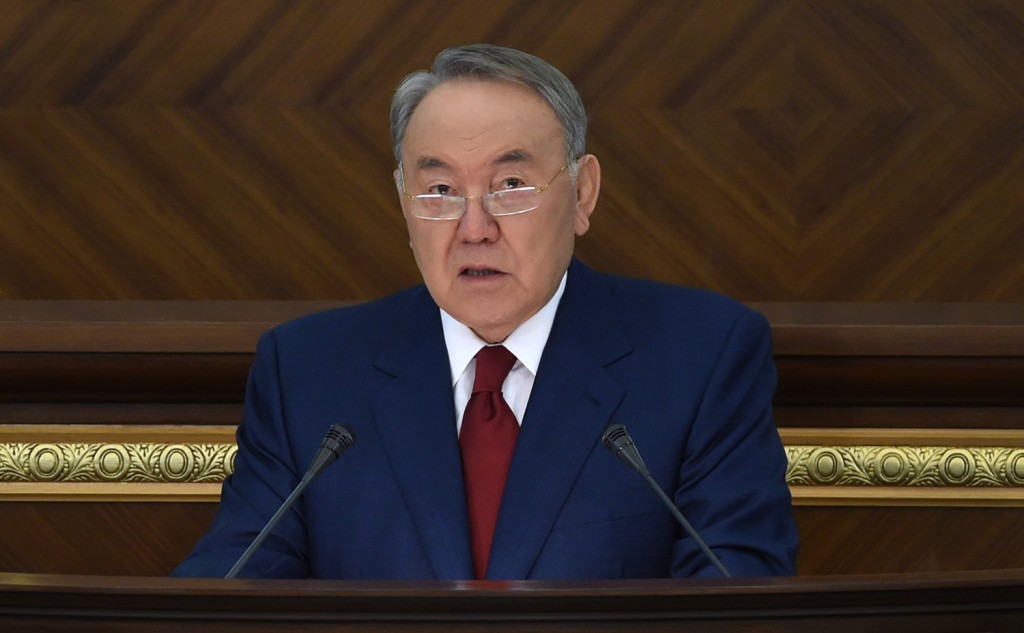 “Kazakhstan meets the 25th anniversary of independence with the newly elected parliament. Three parties and nine members of the Assembly of the People of Kazakhstan (APK) won in the recent elections. I congratulate all of us with the victory in the elections held in conditions of fair competition, as well as the new deputies with the status of parliamentarians,” he said.

Nazarbayev recalled that the 25th anniversary of Kazakhstan’s independence coincided with a difficult period of the global crisis. The new composition of the parliament starts its work in particularly difficult circumstances. There is a multi-dimensional and multi-level crisis across the world. Unpredictable world trade and financial markets negatively affect the economy of Kazakhstan. Various social problems grow even in relatively prosperous countries, he noted.

“Firstly, it is necessary to adopt a unified tax and customs code, which will ensure transparency in all financial procedures. Secondly, the adoption of the code ‘On Subsoil and Subsoil Use’ will accumulate all the rules governing relations in this sphere into a single legislative act. Thirdly, changes into the current legislation on electric power industry are needed. Fourth, in the framework of the second phase of the reforms in the antitrust sphere, the changes and additions to the legislation on competition are required. Fifth, legislation on the subject of the further transfer of government functions into a competitive environment should be modernised,” Nazarbayev said. 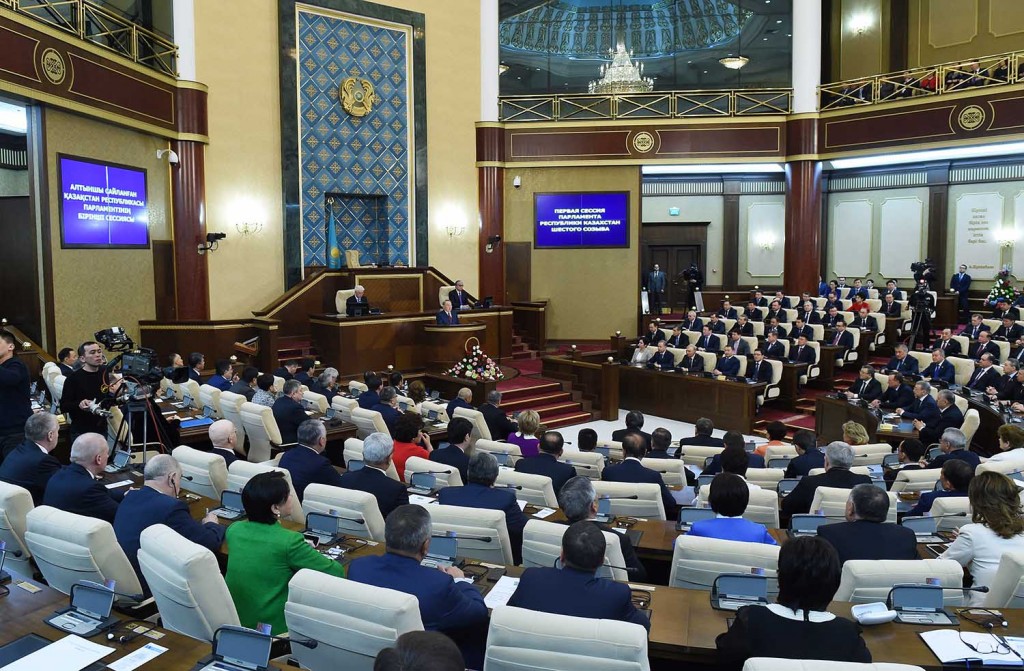 In addition, the President expressed confidence that the deputies of the Mazhilis will continue the tradition of constructive cooperation in the legislative process with the Senate of the Parliament.

“An important task is to develop a perspective plan of legislative work for the entire term of the new Mazhilis. I want to emphasise the general political role and responsibility of both chambers of parliament in the current conditions. It is necessary to strengthen inter-party cooperation of parliamentarians and achieve coordinated work of all the factions and deputy groups. An important task is to take an active part in the international inter-parliamentary community. I am sure the new deputies will quickly join the work, whereas the former members [who were returned to the Mazhilis from the previous convocation] will ensure the continuity and fast transition to the new approach,” Nazarbayev said.

Addressing the gathering, which also included the members of the Government and the Constitutional Council, he noted that since Jan.1 Kazakhstan has been living in a new legal and institutional environment, which was formed through the adoption of 59 laws and 400 regulations last year. The things that were only plans yesterday have now become a reality, and every citizen has similar opportunities to those provided in the most developed countries, the President said.

“The national legislation in the sphere of economy and labour relations was fundamentally transformed considering the interests of business development. The most favourable conditions and incentives are created for the domestic large, small and medium-sized businesses, including farmers and agricultural enterprises. In the next 10 years it is planned to create 660,000 new jobs, including 70,000 in the processing and innovative sectors,” Nazarbayev informed.

“The national economy has been given new investment dynamics. According to the [World Bank’s] ‘Doing of Business’ report, our country is ranked 41st among 189 countries of the world. In the ranking of efficiency of labour market, Kazakhstan is ranked 18th among 140 countries. We opened a ‘green corridor’ for foreign investors. Strategic investors from Germany, Italy and China have been drawn to the agrarian sector,” the President stressed. 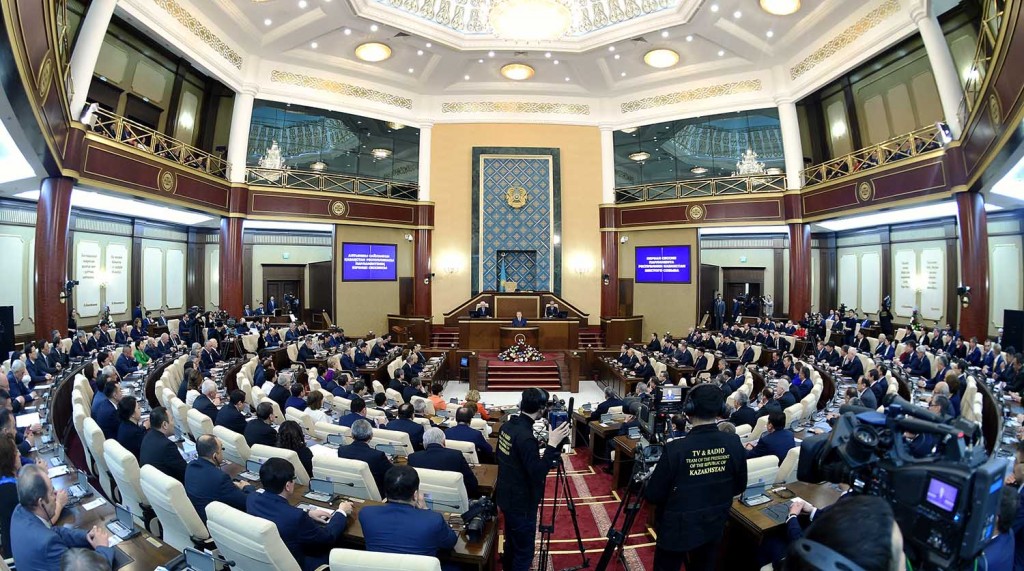 According to Nazarbayev, as part of the global logistics, a multimodal Eurasian transcontinental corridor is being created in Kazakhstan. The logistic zone of Kazakhstan in the Chinese port of Lianyungang will increase the flow of goods through the territory of Kazakhstan by seven times. The European Commission has lifted all restrictions on Air Astana airline’s flights to the EU countries, he added.

“Today, we started the realisation of a new state healthcare programme. The uniform system of realisation and commercialisation of scientific projects is created based on a new law. Five domestic scientific developments are being commercialised. Six colleges in Kazakhstan have been granted a total amount of KZT 425 million by the World Bank for modernisation. It is an important step towards implementation of the project ‘Free Professional Educations for All’,” Nazarbayev said.

In his words, starting next year, the country will gradually begin introducing a trilingual system of education. By 2020, a full transition to a 12-year secondary education will be ensured. In addition, each school graduate will have a chance to master the first working qualification free of charge.

“Twenty intellectual schools have now been constructed in Kazakhstan. It has given a very important impulse in the secondary education. The new content of education, which has gone through approbation, produced good results. This year it is planned to introduce it for the first graders in 30 other schools. However, this work goes too slowly. What has already successfully passed approbation in intellectual schools has to be introduced across the country during three to four years. I instruct the Ministry of Education and Science to ensure this,” Nazarbayev said.