By Kamila Zhumabayeva in Culture on 26 March 2016 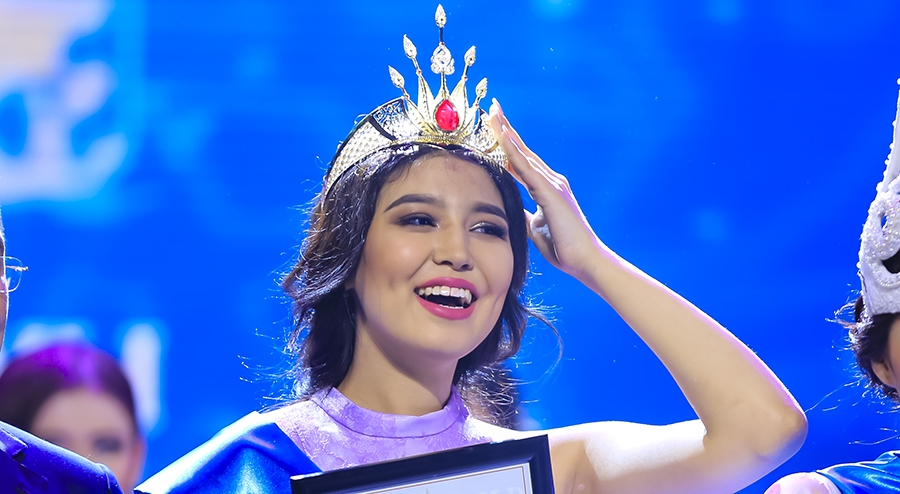 “Winning was not easy, I was selected first out of 600 contestants and then out of 21 participants of the contest, each of whom deserves the title of a beauty queen,” Akhatova said in an interview after the results were announced. “Intuition told me that I will be able to win this contest, but I did not believe it till the end; I really wanted to and am wholeheartedly glad about winning.”

The final contest’s participants consisted of 21 girls between the ages of 16-22 from Kazakhstan’s different regions. The contest’s “Vice Miss” was 18 year-old Sabina Tenbai from Astana who is a first-year student of Eurasian National University. Astana Ballet artist, 22-year-old Ayaulym Makumova from Astana won second place.

Knowing Kazakh traditions and the Kazakh language as well as the literature and history of the Kazakh nation were among the basic conditions for participating in the beauty contest. Akhatova impressed the jury and the audience with her memory as she recited Abai Kunanbayev poems by heart.

Akhatova received a crown made of gold, a pendant and a dress from designer Aida Kaumenova. However, the possibility to establish a career in show business is the main award for a winner.

For example, Gulnaz Zholanova who won this contest in 2014 is now a host of the Aiyel Syry (Women’s Secrets) talk show on Eurasia One Channel, according to the news website. She also starred in the Kustar Ani (Singing of Birds) film dedicated to Kazakh composer Nurgisa Tlendiyev, which was released in 2015.

The national style beauty contest was held for the third time in the capital. The jury consisted of Yessentayeva, honoured artist of Kazakhstan Maira Muhammedkyzy, head of Astana’s culture department Bolat Mazhagulov, Kaumenova and others.

The contest consisted of three stages. Participants walked a runway in evening outfits from Kazakh designers during the first stage. Ladies demonstrated the ease of gait and the ability to present themselves and their outfit to the public during this phase.

Ladies demonstrated their talents during the second stage and had to respond to questions about Kazakh national traditions, customs and other topics and provide detailed explanations to topics during the third stage, the news agency reported. Contestants sang, danced, read poems and monologues in the course of the contest.

A big part of the event was allotted to performances by Kazakh artists, such as Nursultan Kurman, Kamshat Zholdybayeva, Toregali Toreali, Erke Esmakhan, Aikyn and bands such as KeshU, Alau and others.