By Malika Orazgaliyeva in International on 31 March 2016 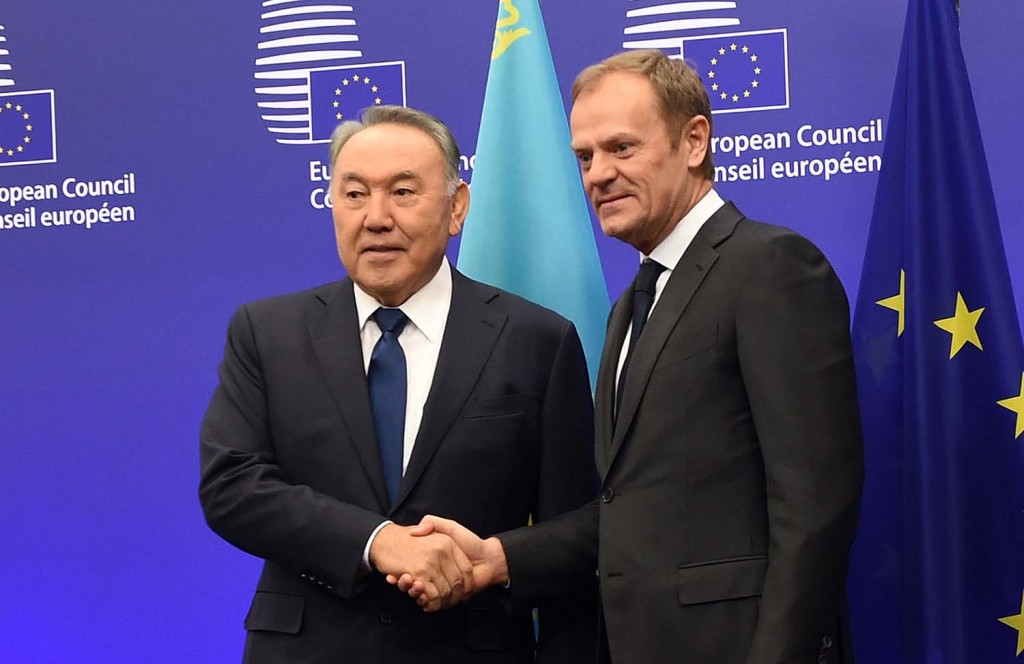 Nazarbayev and Juncker welcomed the signing of the Enhanced Partnership and Cooperation Agreement (EPCA) between the EU and Kazakhstan last December and announced the completion of procedures required to start the provisional application of the agreement between Kazakhstan and the EU.

“During the last 23 years, we have had good relations with the EU. Today, Kazakhstan is the only post-Soviet country to have concluded an EPCA with the EU,” Nazarbayev noted.

“On May 1, we can start to temporarily use the economic side of the EPCA. Today, I asked Junker to speed up the ratification of the agreement among EU member states,” he added.

The EPCA aims to ensure favourable conditions for political and economic cooperation and to promote stronger contacts between Kazakhstan and EU countries. With Kazakhstan the first Central Asian country to sign such an agreement with the EU, the importance of maintaining a regular dialogue at the highest level was noted.

Welcoming the accession of Kazakhstan to the World Trade Organisation (WTO), Nazarbayev and Juncker reaffirmed their interest in creating the necessary conditions for trade, transit and production; minimising barriers and risks; and improving coordination in this area.

The two sides agreed that intensifying scientific, technological and educational cooperation through the EPCA will contribute to the further diversification of Kazakhstan’s economy and will strengthen its competitiveness. They also underlined the importance of transparent rules and regulations for a favourable investment climate in Kazakhstan, which should become an incentive for more investment and guarantees for investors.

Juncker welcomed Kazakhstan’s commitment to a sustainable future, its green economy concept and the upcoming EXPO 2017 in Astana on the theme of “Future Energy.” They discussed the possibility of European participation in the exhibition using best EU practices in alternative and renewable energies. Nazarbayev also informed the European side on the concept of the Astana International Financial Centre, which is currently going through an initial institutionalisation process and would later inherit parts of EXPO 2017 premises.

Nazarbayev and Juncker agreed that promoting good governance and respect for the rule of law and the protection of human rights and fundamental freedoms form a central element of the EU-Kazakhstan relationship.

Nazarbayev expressed his support for the implementation of regional cooperation within the framework of the renewed EU Strategy for Central Asia. According to the statement, the two sides will pay particular attention to environmental protection, rational use of water resources, fighting terrorism and violent extremism, preventing and fighting organised crime and countering illicit drug activity and illicit trafficking in firearms.

During the meeting with Tusk, the sides exchanged views on cooperation between Kazakhstan and the EU in political, commercial, economic, cultural and humanitarian spheres.

Nazarbayev noted that the EU is one of the most important vectors of Kazakhstan’s foreign policy and a crucial trade partner. He drew attention to the fact that half of the country’s foreign trade is with the EU.

At the meeting, Nazarbayev noted that this month, Kazakhstan’s Senate ratified the EPCA and expressed confidence that it will push bilateral cooperation to a new level.

Tusk congratulated Nazarbayev and Kazakhstan on the upcoming 25th anniversary of independence, expressing hope that the close Kazakhstan-EU partnership will solidify despite recessionary trends in the global economy.

Earlier, immediately after arrival to Brussels, Nazarbayev laid flowers at the Maalbeek metro station in memory of those killed in the terror attacks of March 22.

On the sidelines of the ceremony, Nazarbayev spoke with Minister of the Government of the Brussels-Capital Region Guy Vanhengel and expressed his condolences.

“Kazakhstan condemns terrorism in all its forms and manifestations and mourns together with the Belgian people. I wish a speedy recovery to the injured and hope that families and relatives of the killed will overcome this tragedy as soon as possible,” Nazarbayev said.