ASTANA – The military cooperation project for 2016-2017 has been developed between the Kazakh and American armed forces, according to the President of the Kazakh Ministry of Defence Centre for Military and Strategic Studies Kozykorpesh Karbuzov. 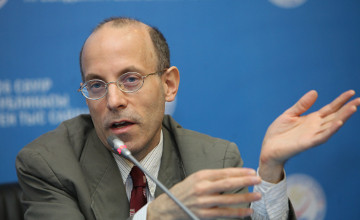 “We have developed a common approach to defence planning and military cooperation between Kazakhstan and the U.S. for 2016-2017,” he said. The comments were made March 18 during “Contemporary U.S. Foreign Policy and its Realisation in Central Asia,” an international conference held in the city.

Karbuzov noted Kazakh-American military relations for the next two years will be aimed at peacekeeping, armed forces professionalisation and enhancing military education.

“We plan to improve the teaching methods of the military educational institutions of Kazakhstan and promote the development of the non-commissioned officers corps. At the same time, we are going to continue working on language learning. In the near future, the exchange of cadets of military educational institutions of Kazakhstan and the United States is planned as well,” he added.

Karbuzov indicated the two nations have already held their first joint event, a seminar on improving the methodology of cadet training. He also highlighted the importance of Steppe Eagle, an international special tactical peacekeeping exercise coordinated with the participation of both nations’ Armed Forces.

The think tank was founded in 1961 for research and analysis. As such, Weitz is an independent scholar and his comments represent the institute, not the American government.

“Another important point is that Central Asia after the collapse of the USSR has not become an object of contention between Russia and China. Today, we are seeing greater cooperation between the two countries, which is very good because it allows you to avoid conflicts in the region,” he said.

“Kazakhstan has succeeded in the construction of a multi-vector policy. The Kazakh government is developing a variety of tools to combat corruption. And this is the main kernel, the ‘heart’ of Kazakhstan’s policy, which is very important,” he added.

Weitz noted the American sanctions policy has been very effective throughout the years and although it is currently used in relation to Russia, the policy negatively affects many Central Asian countries. He added the American government must work on the policy to prevent such adverse effects.

“We have evidence that even those people who are watching Russian and foreign channels believe that Russian TV channels are more believable. I am not an expert in this area, but I believe that this is a problem. I do not know how it happened. Maybe you need more open space for the mass media, which will be attended by Western, European and Russian TV channels. People will have equal access to the mass media and have an opportunity to choose and make conclusions, getting information from several sources,” he said.

Obtaining information about the event or the country from different sources will allow Kazakhs to form an objective opinion.

“Every citizen should be able to choose what media to watch and use. For example, there is state and independent media in the U.S. and information provided by these media often differs,” said Weitz.