By Anuar Abdrakhmanov in Sports on 9 February 2016

ASTANA – The Kazakh national futsal team reached the quarterfinals in its first-ever appearance at the UEFA Futsal Championship (Futsal Euro), which is taking place this year Feb. 2–13 in Belgrade, Serbia. 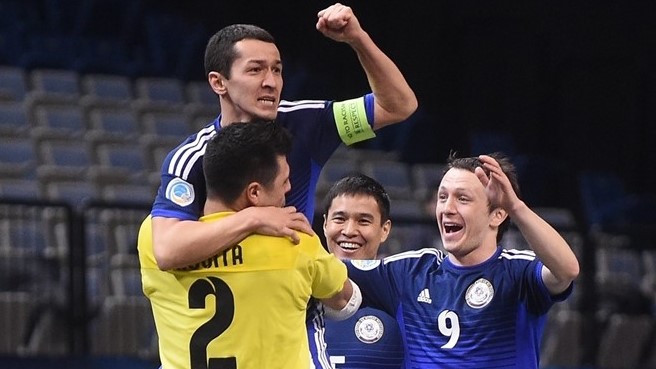 Futsal is a variant of soccer played indoors on a smaller field. Kazakhstan’s record of success in the sport is associated with AFC Kairat Almaty, which won the UEFA Futsal Cup among professional clubs in 2013 and 2015. However, the national team’s only tangible achievement, until this year, has been qualifying for the FIFA Futsal World Championship in 2000, where they lost all three matches against host Guatemala; the sport’s most titled team, Brazil; and Portugal. Five previous attempts to reach the UEFA Futsal Championshipfailed to bring fruit before last year, when Kazakhstan managed to beat Georgia, Romania and perennial European favourites Portugal before eclipsing Bosnia and Herzegovina in the playoffs to secure a place for the first time at the tournament’s final stage in the Serbian capital.

The tournament started with a tough challenge, facing the powerful Russian team, Futsal Euro 2014 runners-up and winners of the tournament in 1999. In two previous meetings with them, Kazakhstan was crushed, 0-4 and 1-5.

“We have long waited for this to happen, so we appreciate the tournament’s importance for [fans in] Kazakhstan. All our thoughts are now on the game with Russia. The team is motivated and we want to challenge the powerful rival,” was a pre-match comment from Kazakhstan’s captain, Dinmukhambet Suleimenov. 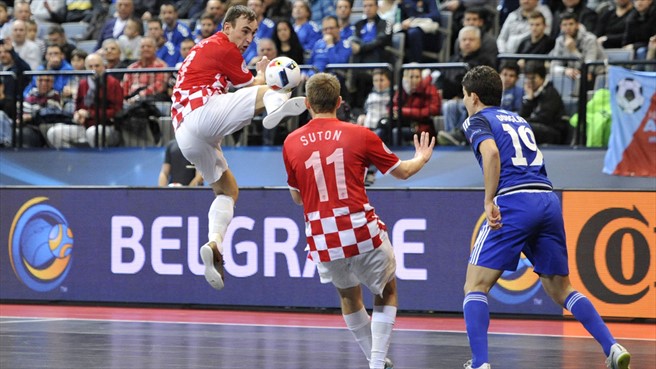 A moment of play in Kazakhstan vs Croatia match on FutsalEURO 2016. Photocredit: (C) GettyImages

In the end, Kazakhstan managed to give the Russians a decent fight. In the early seconds of the match, Douglas Jr. put up a kick that bounced off the crossbar, and the sides went on to exchange dangerous attacks.

In the 12th minute of the match, Russia’s Romulo secured a lead for his team, and then scored again only 28 seconds later. Kazakhstan hit the net only once in the first half, when goaltender Higuita charged to the other half of the pitch to provide an assist for Serik Zhamankulov’s strike.

The second half was a chess match, as the Kazakh team played long combinations in front of the opponents’ goal, waiting for them to make a mistake. Higuita’s incursions into the other half of the pitch increased in intensity, but the solid Russian defence allowed only a couple of limited chances, and the game ended with an honourable 1-2 loss for Kazakhstan.

Kazakhstan’s second game was against Croatia, also experienced players, with a top-four finish in 2012.

The game started slowly, as both teams played pretty defensively, but in the sixth minute, Douglas Jr. drew first blood for Kazakhstan. A minute later, the Croats took advantage of a mistake by Suleimenov and Vedran Matosevic hit the empty net to equalise. Almost immediately, the Kazakh captain made a solo slalom into the opposing penalty area and restored his team’s advantage. In the 17th minute, Zhamankulov made it 3-1. 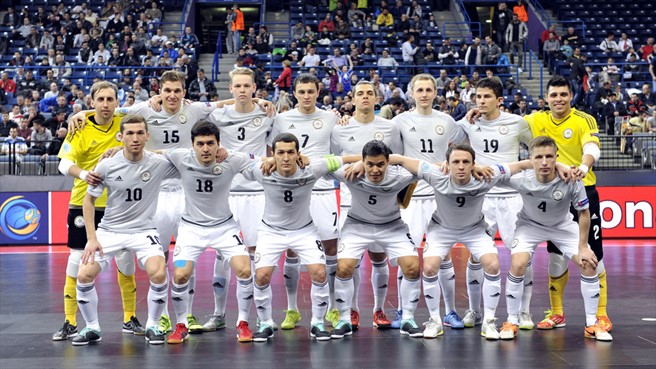 Kazakhstan lineup ahead of its debut game on FutsalEURO against Team Russia. Photocredit: (C) GettyImages

By the second half, Kazakhstan was firmly in control of the situation. Zhamankulov was clinical again while Croatia managed only one more goal, by Josip Suton. The 4-2 final result is seen as sensational progress for Kazakhstan, bringing them to the quarterfinals.

“This is an exceptional outcome for Kazakhstan. The players fulfilled their tasks. All 14 are spirited fighters, as they clearly proved in this game by giving everything on the floor,” Kazakhstan head coach Ricardo Sobral (who goes by the name of Cacau) commented following the historic match.

The quarterfinal against current European title holders Italy was played Feb. 9 as this issue went to print.