By Nikolai Khamovnikov in Op-Ed on 26 February 2016

In advance of Egyptian President Abdel Fattah el-Sisi’s visit to Astana on Feb. 26-27, Kazakh Ambassador in Cairo Berik Aryn answered a number of questions for The Astana Times on the development of bilateral cooperation between the countries. 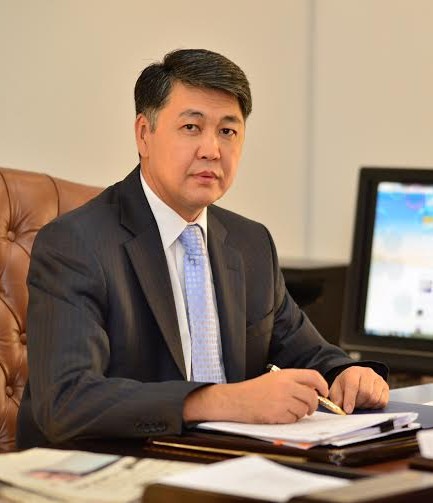 In light of the visit of Egyptian President Abdel Fattah el-Sisi to Kazakhstan on Feb. 26-27, how would you evaluate the current state of bilateral political relations between our countries?

On March 6, we celebrated the 24th anniversary of the establishment of diplomatic relations between Kazakhstan and Egypt. During this period, our countries have accomplished many things, such as establishment of a high level of political dialogue and development of trade and economic relations, as well as cultural and humanitarian cooperation. Each of these areas includes a number of implemented projects and accommodates big plans for the future.

In this regard, it is not surprising that Kazakhstan is the first country among Central Asian countries and the second after Russia among the Commonwealth of Independent States (CIS) countries to which the current President of Egypt Abdel Fattah el-Sisi is paying an official visit after his election to this post.

Our countries are playing leading roles in their regions, adhere to similar positions on many international and regional issues, are firmly committed to the international legitimacy in its foreign policy and seek to develop relationships with all countries on the basis of mutual respect and equality principles.

During the past five years Egypt has gone through two revolutions, quite a difficult moment in its history which affected its relations with foreign partners, as well as the pace of development of Kazakh-Egyptian relations.

Nevertheless, the political dialogue between the two countries was not interrupted and the main principles of relationship between Astana and Cairo based on friendship and the desire of the two countries to cooperate closely in all areas of intergovernmental relations remained unchanged. As a result, Cairo has positively responded to almost all the major international initiatives of Astana, including the organisation of EXPO 2017 and establishment of the Islamic Organisation for Food Security (IOFS), and commended Kazakhstan’s work on nuclear disarmament and its activity in the framework of the Conference on Interaction and Confidence-Building Measures in Asia (CICA) and the Congress of Leaders of World and Traditional Religions.

How do you evaluate the trade and economic cooperation between Kazakhstan and Egypt?

In general, it is quite promising. As you can see, the political cooperation between our countries is at a high level and our task today is to give a boost to bilateral trade and economic relations. We need to increase the turnover by several times, which amounted to about $50 million at the end of 2015, as well as increase investment and economic cooperation.

The most promising areas of trade, economic and investment cooperation are the pharmaceutical, textile and agro-industrial fields, tourism, space sphere and export of Kazakh wheat. In this regard, we are conducting a systematic operation with the business communities of the two countries.

Last year, Kazakhstan Gharysh Sapary and Egyptian National Authority for Remote Sensing and Space Sciences, as well as the Egyptian Company for Space Applications and Remote Sensing, signed a number of documents on cooperation in the space field.

The fourth meeting of the Kazakh-Egyptian Business Council, membership in which has recently been fully renewed by the companies interested in bilateral cooperation, is going to be held within the framework of the official visit of President el-Sisi to Astana. Participation of more than 20 major Egyptian companies from different sectors of the economy is expected at the business forum, among them potential buyers of Kazakhstan’s grain, suppliers of Egyptian goods to Kazakhstan’s market and companies with investments. For example, the Egyptian company Medical Union Pharmaceuticals intends to conclude a memorandum of understanding with KazNex Invest and has expressed its interest in construction of a pharmaceutical factory.

The Kazakh side also shows great interest. The event will be attended by over 40 domestic companies, including large transport and logistics companies such as Kazakhstan Temir Zholy Express and Sea Port of Batumi (100 percent of shares owned by KazMunayGas), as well as textile, pharmaceutical, tourist, service and agro-industrial companies and grain producers.

We have great hopes an agreement will be reached between the business groups on establishment of a stable supply of Kazakh grain to Egypt. The Middle Eastern nation is the world’s largest grain importer (about eight million tonnes per year imported by state and private companies), as Kazakhstan is at the top of leading exporters of this agricultural crop.

In general, the results of the business forum are expected to identify specific areas of mutually-beneficial trade, economic and investment cooperation between the two countries.

Egypt, like a number of other countries, aspires to sign the free trade agreement with the Eurasian Economic Union (EAEU). We support this aspiration and believe that this format of cooperation will provide new opportunities.

What are the relationships today between Kazakhstan and Egypt in the area of cultural-humanitarian cooperation; in other words, how can our countries be interesting to each other in this area?

Despite the fact that it has only been 24 years since the establishment of diplomatic relations between our countries, historic ties between our nations go back for centuries. Egyptians hold in great respect the memory of a glorious son of the Great Steppe Sultan Baybars, who ruled Egypt for 17 years and played a significant role in the history of the Muslim world. In our effort to strengthen the friendship between our nations, our government is involved in the restoration of the Sultan Baybars mosque in Cairo.

Egypt is home to Al-Azhar University, the world centre of moderate Islamic thought, which during a period of growth of religious extremism and radicalism, Islamophobia and exacerbation of inter-religious relations in the world takes great measures to reveal the true peaceful nature of Islam to the masses and promote dialogue between religions.

Active participation of the Egyptian clergy in the face of Sheikh Al-Azhar and leadership of the Ministry of Awqaf of Egypt has greatly contributed to the establishment and international recognition of the Congress of Leaders of World and Traditional Religions as a global platform of inter-religious and inter-civilisational dialogue.

Nur-Mubarak, the Kazakh-Egyptian Islamic University in Almaty built upon the personal commission of the-then President of Egypt Hosni Mubarak as a gift to our people, has become a training centre for qualified religious personnel who receive proper theological education without leaving Kazakhstan.

Currently, around 250 Kazakh students are studying in different Egyptian universities. The cooperation between Al-Farabi Kazakh National University and other universities in Kazakhstan has been established with universities in Cairo, Ain Shams, Al-Minia, Tanta and Zagazig.

In order to promote consolidation and development of the relationship of the two countries, the Association of Kazakh-Egyptian Friendship Society was established last year at the initiative of the embassy.

In the framework of the celebration of the 550th anniversary of the Kazakh Khanate, we have translated the first volume of the trilogy “Nomads” by famous Kazakh writer Ilyas Yessenberlin into the Arabic language and published it in Cairo.

There are also established twinning relations between Astana and Cairo, Alexandria and Almaty and Zhambyl region of Kazakhstan and the Eastern province of Egypt.

As you can see, we have quite a broad scope of cultural-humanitarian cooperation, sustainable mutual interest and well-established contacts.

What kind of results do you expect from the upcoming visit of President el-Sisi and how do you see the prospects of further development of bilateral cooperation?

In 2014, Kazakh President Nursultan Nazarbayev said in his congratulatory message to  el-Sisi on the occasion of his election as Egyptian President that “Kazakhstan considers Egypt as one of the most important partners in the Islamic world and is interested in deepening bilateral cooperation between our countries further and strengthening cooperation within the framework of multilateral structures.”

In this regard, we are confident that the upcoming official visit of the Egyptian leader to Astana will give a powerful uplift to bilateral relations and will determine a new course of Kazakh-Egyptian partnership in all spheres.

In light of the recent instructions of President Nazarbayev, special attention will be paid in Astana to the build-up of trade and economic ties, promotion of mutual investments and establishment of business contacts in the military-technical sphere.

In addition, we will exchange views on current international and regional topics, deepening foreign policy coordination in the interests of further strengthening security and stability in Eurasia, the Middle East and the whole world.

Kazakhstan can provide necessary support to Egypt in its efforts to obtain the status of dialogue partner in the Shanghai Cooperation Organisation (SCO) and to conclude a free trade agreement with the EAEU.

Certainly, the issues of expansion of cultural and humanitarian ties between our countries will be substantively discussed during the visit.

In light of increasing terrorist attacks, the parties will discuss further cooperation in the fight against its threat and religious extremism.

I am convinced that this visit will open a new chapter in the relationship between Kazakhstan and Egypt, which, in turn, will allow us to conduct more prolific work with the new Egyptian authorities on development of multifaceted, mutually-beneficial contacts, friendship and partnership.