By Anuar Abdrakhmanov in Sports on 11 February 2016 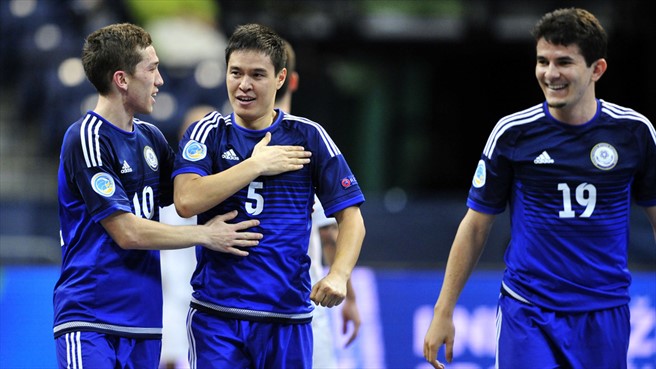 “We want to go down in history!” said Kazakhstan’s head coach Cacau (Ricardo Sobral) before the Feb. 9 match.

His words turned out to be prophetic. The 44-year-old Brazilian’s team came onto the field as clear underdogs and overturned all the pre-match prognoses.

Kazakhstan’s play in this particular game can be summarised by the beautiful Italian word “Perfetto!” From the first whistle, the players disregarded their opponent’s favourite status and began dominating the field. Goalkeeper Higuita actively helped the attacking forces by putting additional pressure on the Italian’s defence lines, but in crucial moments his teammates lacked fortune. First, Douglas Jr.’s strike hit the crossbar. A few minutes later Leo struck dangerously, but again it was a close miss.

Kazakhstan took the lead at 16 minutes. Following a corner kick, Leo’s long-range ball went into the Italian net, making the score 1-0. It took less than three minutes to double the Kazakhs’ advantage. Again, Leo struck from a distance, but the ball hit the woodwork. The resulting mess in front of Mammarella’s goal was used by Serik Zhamankulov to score his fourth goal of the tournament. The team was up 2-0 at the end of the half.

The halftime statistics of shots on goal reflected Kazakhstan’s domination on the field, as the team took 31 shots to Italy’s 10.

In the second half the Italians turned up the pace considerably, showing they were now seriously taking up the cause. At the 23rd minute, Fortino cut the contender’s advantage to 2-1. The Kazakhs started again from centre, taking only 30 seconds to restore the balance as Chingiz Yessenamanov scored a beautiful goal to make it 3-1.

The Italians did not give up, continuing to press the Kazakh defence. That night, however, the field’s best man was Higuita, whose brilliant play clearly demonstrated why a good goalkeeper is worth half a team.

The Italians scored again with three minutes left, creating a nervous ending. Cacau immediately called a timeout and it worked: the Kazakhs scored two more goals as Yessenamanov’s shot, deflected by the bar, was picked up by Dauren Nurgozhin for the goal. Italy replaced their goalkeeper with a field player in a desperate attempt to save the match, but the Kazakhs heroic defences withstood the last storm. Leo finally cleared everything, as his long-range shot sent the ball into an empty Italian net for the final, 5-2.

As a result, Cacau’s team rewrote history, making it into the semi-finals where they will play Spain late on Feb. 11.

“Our emotions are impossible to convey in words. We really wanted to win because we knew that the whole country was behind us! We prepared most seriously for the match and examined our opponent’s [strengths and weaknesses] really well. The team used 100 percent of its potential. Credit is due for this victory to our coaching staff that did a great job and helped bring us all the way into the semi-finals,” said Zhamankulov, Team Kazakhstan’s best scorer in Futsal EURO 2016.