By Aiman Turebekova in Business on 5 February 2016

A ceremony of sending of a demonstrational container train from China to Iran through Kazakhstan was held Feb. 1 in Yiwu city, the Province of Zhejiang in East China, reported the press office of Kazakhstan Temir Zholy National Company (KTZ). 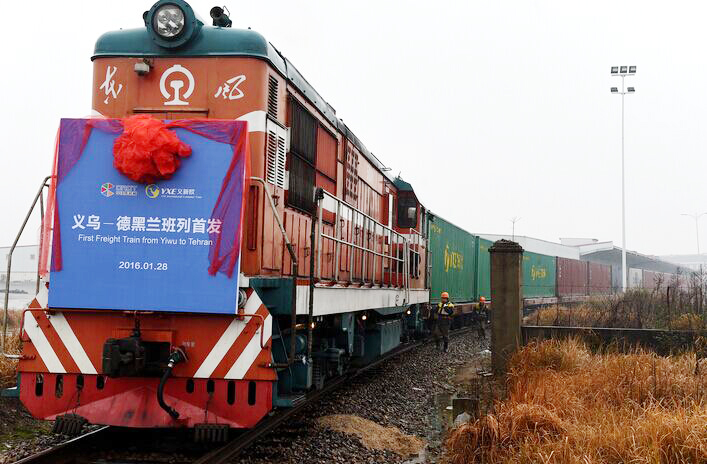 Mayor of the town Sheng Qiuping, heads of China Railway Container Transport Group and Kazakhstan Temir Zholy Company as well as the international transport and logistics holding TransInvest Group and other officials took part in the event.

The new route, opened by the joint efforts of the railway companies of China, Kazakhstan, Turkmenistan and Iran, is the first logistics option in high-speed delivery of cargo from the coast of East China to markets of Iran.

The train is formed by 40-foot containers with different types of cargo with 10 days transit time. Transportation by rail is much faster than by sea.

The new transport and logistics infrastructure of Kazakhstan is able to reduce significantly the length of the route and the time of delivery of goods, which entails the growth of regional trade on the Eurasian continent.

Development of container transport on the international transport route contributes to its attraction capacity and competitiveness as well as the country’s transit potential.

Elsewhere, questions on the export of Kazakh grain and conditions for Tajik passenger trains on the territory of Kazakhstan were raised in Astana on Jan. 27.

During the meeting, President of Kazakhstan Temir Zholy Company Askar Mamin and head of the State Unitary Enterprise Rohi Ohani Tojikiston Kamil Mirzoali discussed bilateral cooperation in the field of railway transport and logistics. After negotiations, the parties signed an agreement to supply a wide range of products of railway engineering to Tajikistan in 2016.

Under the agreement, the sides will cooperate in the supply of locomotives, turnouts and their repair kits and rolled wheels for freight and passenger trains.

The Tajik delegation was briefed on advanced technologies, long-term plans for further development of the Kazakh railway engineering.