By Aiman Turebekova in Nation on 15 February 2016 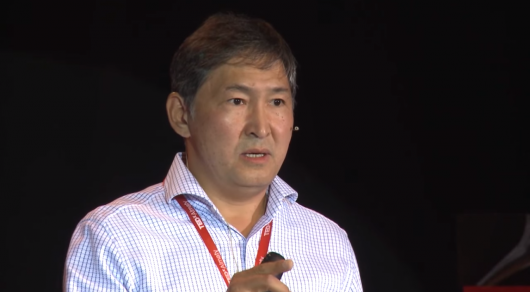 Erlan Sagadiyev, the newly appointed Minister of Education and Science of Kazakhstan, spoke at TEDx Almaty on challenges of education in Kazakhstan back in 2013. Photocredit: tengrinews.kz

Sagadiyev believes it is necessary to share goals and tasks to improve the education system. “Speaking about reforms in the field of education in Kazakhstan, we need one type of school, in which all the technical subjects are taught in English, history and culture of Kazakhstan in Kazakh and history and culture of the (Commonwealth of Independent States) CIS countries in Russian. There have to be three mandatory languages in order to have access to a large stack of books,” said Sagadiyev at TEDxAlmaty 2013.

An alumni of the University of Minnesota, Sagadiyev started his career as a second secretary of the department of applied economics of the Kazakh Ministry of Foreign Affairs in 1990.

From 1993 to 1994, he worked at the World Bank in the department of agriculture as a curator of Eastern Europe, the CIS and the U.S. Afterwards, he moved to America as the head of a project in the field of marketing of technologies.

He is one of the founders of the International IT University and the University of International Business in Almaty. He has been working as a public official since 2012, starting as an adviser to the Prime Minister of Kazakhstan and then appointed Vice Minister of Industry and New Technologies. On Feb.10, Sagadiyev replaced Aslan Sarinzhipov as education minister.

In turn, on Feb. 11 Sarinzhipov was appointed President of the Nazarbayev Fund, an organisation established in 1998, and a member of the Board of Trustees of Nazarbayev University. He had served as a Minister of Education and Science since 2013.