By Staff Report in Sports on 9 February 2016

ASTANA – The Kazakhstan national bandy team lost to Sweden 0:4 in the bronze medal game at the 36th World Bandy Championship in Ulyanovsk, Russia on Feb. 7, and settled for the fourth place. 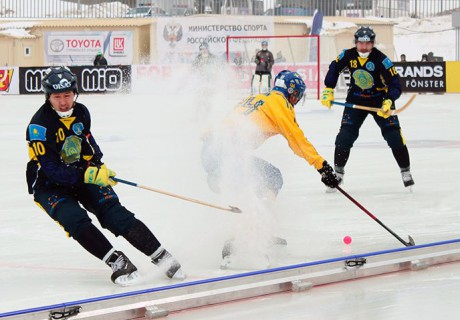 Team Russia went on to win the gold by ousting Finland 6:1 and took its tenth title in history.

A record 18 teams competed in the tournament this year from Africa, Asia, Europe and North America: eight in Division A and 10 in Division B.

In the preliminary round in Division A, Kazakhstan held three matches and lost two. The first match was lost to the host Russia 1:9 on Feb. 1. The next day the team lost to Sweden 4:11 and on Feb. 3 managed to defeat Finland 5:4 to get its first win of the tournament.

In the playoffs, the team defeated Norway 11:3 on Feb. 4 and lost in the semis to Russia 6:16 on Feb. 6. It was the first time the national team didn’t get any medals at bandy world championship since 2011. Previously the team won six bronze medals, four of them back to back from 2012 to 2016.

The Division B games will start Feb. 10.